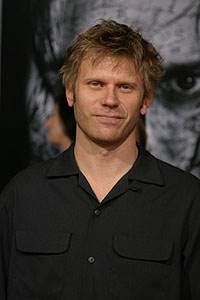 Nick sees his wife, only the visage openly admits that she is not ‘˜Sarah’, but Lucifer in disguise. We get a little bit of back-story on Nick and his tragedy. A burglar snuck into their home and savagely murdered his wife and child. As Lucifer speaks, we see that he is quite a skull mechanic, speaking to Nick’s questioning of how God could allow something like this to happen. He continues to noodle with Nick’s emotions until he agrees to allow Lucifer to use his body to get revenge against god.

We move out to the street for our vantage point as Lucifer enters the body of Nick in a display of light and unholy sounds. The devil has a new set of wheels, look out world.

Sam and Dean are with Bobby at the hospital. The doctor has told Bobby he may never walk again, so it looks like when Zach undid his afflictions he conveniently set up a marker with the boys at Bobby’s expense. No doubt they’ll have to do a little favor for Zach in order for Bobby to recover, or maybe Castiel can heal him — but judging from earlier events when Zach ordered him to undo his damage on the Winchester brothers, it looks like Zach is the only one who can make Bobby bi-pedal again.

As they leave, Bobby tells Sam that everything he said earlier was the demon talking and that he would never abandon Sam. Ever. Awwwww

Outside, things aren’t so rosy between Sam and Dean. Dean levels with Sam, the damage done by choosing with a demon over him is permanent. Their relationship will never be the same. ‘I don’t think we can ever be who we were.’Dean tells a stunned Sam. ‘I don’t think I can trust you.’

Sam stands, now knowing what to say, as Dean walks away and gets into the Impala.

Snappy writing, great twists, awesome dialogue. Supernatural continues to be one of the best shows on television. As far as premieres go, this was one of the most fluid setups for a season long arc that I have ever seen, mostly because the body of the episode played as a really good story instead of becoming subtext to the ‘˜grand plan.’Each returning character was given classy and effective treatment — I almost jumped out of my seat when Castiel returned — and the newest character, Becky, is a terrific gateway character for we obsessed fans, and I hope we see more of her. Score one for Supernatural. Exhilarating, exciting, intense, and hypnotically engrossing – this is how television is done people.