Home
Survivor
Recap – Survivor 20.03 “That Girl is Like a Virus”
Prev Article Next Article

Hello fellow Survivor fans! My name is Michael Salerno and I will be offering some recaps of the granddaddy of all reality shows for the remainder of the season. I truly am a fanatic of the show, owning not only a Survivor buff, the Survivor board game, and a Survivor Christmas ornament, but have applied to the show more than a couple times (here’s just one of my audition videos, from last year). Enough about me though…let’s take a look at what happened last night on….SURVIVOR!

The third episode of Survivor: Heroes vs. Villains opens at the Heroes camp post-Tribal Council. James is still angry about what happened during Tribal so Tom, out of probable self-preservation, tries to calm the big guy down. Also trying to make amends, JT approaches Tom with apologies for going against Tom and voting Stephenie out. JT realized he was at the bottom of the totem pole if he stuck with Tom, Colby and Stephenie so he had to align his vote with the Heroes majority. Speaking of Colby, cast in the blue light of Survivor night vision, he confides to Tom that he’s not sure if he wants to stay in the game. To me, he sounds like a sore loser who wants to take his ball home because he’s not winning. And what’s with Tom being the tribe psychologist? It is an interesting position for him to be in. As a kind of tribe father, it appears no one wants to disappoint him. Even James seemed reluctant to really let himself go in front of Tom. It will still be difficult for the former winner triumph again, but he may be safer than he assumes.

After an abbreviated title sequence (what the heck was that?), despite their second consecutive victory, the Villains are not resting easy…thanks to Parvati’s laughing good time with Russell as they fall asleep. Boston rob points out that one of the biggest traps Survivors consistently fall into is that they sleep next to people in their alliance. Every night so far, Russell and Parvati have shared some bamboo, leading Rob not to trust Russell. Back at the Heroes camp, Rupert bemoans the fact that his tribe hasn’t bonded, leading to their consecutive immunity challenge losses. Miraculously, such a desired bonding experience arises when the chickens get out of their coop and the men of the Heroes tribe chase them down. They corral the chickens, and Rupert declares the tribe unified. Easy as that!

Coach and Russell pow-wow over who should be the first evictee when the Villains finally go to Tribal Council (foreshadowing anyone?). Coach informs Russell that the latter’s canoodling with Parvati is putting a target on his back and ostracizing him. Of course, this doesn’t sit well with Russell’s ego. Who dares to take on the superior Survivor skills of Russell?!? He knows he’s in charge. Russell confides to the camera, “I’m the Daddy around here!”…..and then quickly runs to Parvati tattle on Coach. That night, while Coach entertains his tribe with another one of his incredible tales of adventure, Russell decides his tribe needs to be taught a lesson. Since pouring out their canteens or burning their socks is soooo last season, he decides to bury their only machete. With their 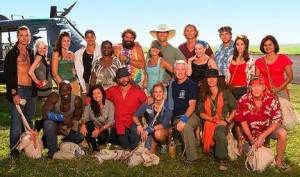 primary tool gone, anger, dissent and distrust will mount, making his tribe-mates all that more manipulable. He’s a dastardly man, but you have to love his gameplay. Russell isn’t the only one scheming though. Randy, giant clam in hand, opines that he is already sick of most of his tribe. He complains to Coach that they aren’t hard workers, and only get by on a wink and some good looks. The Heroes tribe experiences their own bit of dissent, as well. JT tells Candice that he is scared by her strategy and wonders who she thinks should be next to go. When Candice says that she and Cirie aren’t necessarily aligned (she just wants to get as far as she can, however she can), JT tells Cirie that Candice said she doesn’t fully trust Cirie (which Candice never said). Of course, Cirie confronts Candice, who denies the entire conversation. There’s no time to argue the point though, as it is time for a challenge!

Once again, this is a combo Immunity/Reward challenge (Let me interject here: Personally, I like having two challenges per episode. Maybe having 18-20 people makes it too hard to create large challenges so they need to whittle the numbers down before they can effectively create multiple challenges per episode? I don’t know, but I’d like rewards separate from immunity.) with the winners picking up coffee, sugar, and luxury items from home (which couldn’t have been too great if we didn’t see the victors open them). In a redo from Survivor: Palau, a member of each team stands on a circular platform, armed with rectangular bags that they must use to push their opponent into the mud. Both hands must stay on the bag and no legs may be used to kick the person off the platform. First team to eight, wins. With Courtney and Sandra sitting the challenge out, Tom and Russell start off. Like almost all of the match-ups to come, the Hero quickly dispatches the Villain. In fact, the Heroes swept the Villains. The other match-ups are: Candice over Parvati, Rupert over Coach (after a replay because Coach first used his arm to throw Rupert off the platform), Cirie over a not-even-trying Jerri, JT over Tyson, Amanda over Danielle, Colby over Rob (in the only brutal bout with Rob literally flipping over onto his head at one point), and James over Randy. It was this last bout that was hyped at the end of the previous episode as James losing his mind and potentially becoming dangerous. The reality is, however, that after some trash talking and throwing the bag at a dispatched Randy in the mud, there was nothing more to it. With their first victory, the Heroes returned to camp. 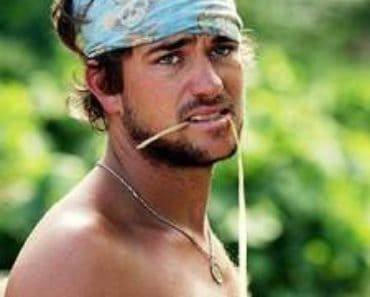