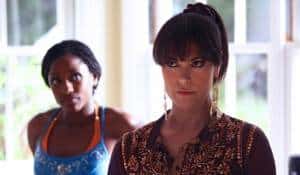 We open at nighttime at the Fellowship of the Sun leadership camp. Jason is walking through the empty grounds and I think this is a dream. He enters a building and sees the various campers dead from a vampire attack. Someone jumps on his back and threatens to drain his blood. Turns out, though, that this was a big prank perpetrated by Luke the jerk and his merry men. Jason’s very pissed that he was duped and then goes on to pontificate about vampires not being a joke and being on the side of the light.

At Bill’s house we pick up where we left off: Bill and Sookie have arrived home to find Jessica and Hoyt canoodling on the couch. Hoyt is apologetic as Bill orders him out of the house, while Jessica is sulky and defensive and Sookie’s trying to diffuse the situation. Hoyt leaves while Bill basically says he was trying to protect him from Jessica, the evil fiend. But Hoyt is too stupid to realize that Jessica’s a crazy vampire and tells her so.

After he leaves, Jessica tells Bill that she was happy to make out with Hoyt, seeing as she was a virgin when she was turned. Jessica runs off, giggling like a school girl, while Sookie says she might actually like her new little “stepdaughter” and suggests they take her to Dallas with them.

Bill starts being a funny kind of sarcastic while Sookie suggests he teach Jessica about being a vampire and a human and he retorts that maybe he’s not as good at it as she thinks. He eventually capitulates and agrees to take Jessica with them to Dallas.

Sam is swimming in the lake with Dawn, who may or may not be evil on account of the claw marks on her back that we saw in the last episode. The two of them flirt with each other and talk about the town. Sam mentions that he might be leaving soon, but he’s not sure where he’s going. Dawn invites him for pancakes and he spots the claw marks on her back as she pulls herself out of the lake.

Tara is talking to Sookie and she seems very out of sorts. Maryann comes by and Tara tells her about her plans to live with Sookie. Tara seems very uncomfortable while Maryann wonders why she would want to leave. Tara asks Maryann to tells Eggs she’s left and the two hug goodbye. 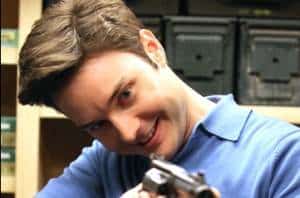 Back at the camp, Jason and Luke are arguing about the biblical origin of vampires, but both of them are so stupid it’s nearly comical to watch them argue. Jason gets called to meet Steve Nolan. As he walks away he delivers the funniest line of the episode

Luke: There’s one thing you can can count on – God will make sure evil get punished.

Jason: Yeah? Then explain Europe to me.

Jason goes to meet Steve, who’s sitting in an ATV cocking a very large gun. Steve invites him to hop on and the two drive off.

At Sookie’s house, Sookie hands Tara a birthday present: a photo of young Sookie, Tara and Gran. Tara asks why they’re going to Dallas and Sookie lies and says Bill has business there, but Tara quickly realizes that the vampires want to use Sookie for her mind reading ability. Sookie tells Tara that she agreed to this to save Lafayette.

At the morgue, Sheriff Bud, cop Kenya and the coroner are looking over a dead body with gouge marks in its back, like Dawn has, except Dawn’s not dead (mysteriously). Ah….we quickly realize the body is that of Miss Jeanette. The coroner reveals that the poison in the gouges paralyzed her, allowing something to carve out her chest.

Andy Bellefleur comes by, wanting to talk to Kenya about a report she did after Tara’s car wreck. The coroner leaves and Andy starts talking about the mysterious pig he saw at Maryann’s the night before. Bud quickly realizes that Andy is drunk and takes his badge. 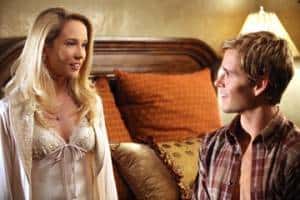 At Lafayette’s, he’s celebrating his freedom with booze, pills, weed and popcorn. Tara’s banging on his door, demanding to be let in. Sookie told Tara everything that happened and Lafayette’s pissed about that fact. When Tara offers to stay to celebrate her birthday, Lafayette sends her packing.

Sam returns to Merlotte’s and Terry’s confused about whether he’s still leaving. Sam insists that he simply hasn’t “left yet”. Sookie’s working that day and Terry tells her that Sam will be leaving town soon, which surprises Sookie. Sam brushes her off and she follows him outside.

Sookie thinks that Sam might be leaving because she blew him off (self-centered, aren’t we, Missy?), but Sam puts her in her place. He says he’s dealing with his own stuff and Sookie tells him she needs a few days off.

At the leadership camp, Jason and Steve are driving through the woods, shooting cardboard vampires with paint guns. Steve is impressed with Jason’s shooting skills. Jason reveals that he’s seen a vampire die and Steve is jealous.

Tara’s watching television at Sookie’s house and crying. She hears something and goes to investigate. Turns out it’s Maryann, her manservant who’s name I forgot, and Eggs, with presents and a nice big cake. Maryann apologizes for scaring her and Eggs asks why Tara was crying. She says her birthday always sucks and Eggs promises her that this year will be different. Maryann reveals that she’s been calling Tara’s friends all day, planning a party.

Jason’s having BBQ and beers with Steve and Sarah at the camp. He’s obviously crushing on Sarah, who’s happy to flirt back behind Steve’s back. Like seriously flirting, which includes doing dirty things with her tongue and a beer bottle. Steve tells Jason that he’s been chosen for a mission: to join their “Soldiers of the Sun” army. 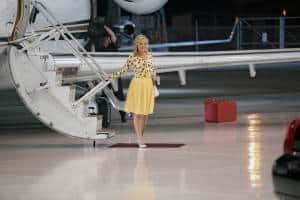 At Merlotte’s, Andy is celebrating his recent job suspension by drinking. Sam goes over to talk to him and announces he’s cutting Andy off. Sam suggests he go home, but Andy refuses. Arlene comments on how dead the bar is and asks Sam if they can close up early to go to Tara’s birthday party at Sookie’s house. Andy leaves to join the party and Tara’s mother comes by with a gift. Sam sends Arlene and Dawn to the party. Ms. Thornton assumed that Tara and Sam were still together and is surprised they’re not. She hands Sam a gift for Tara and asks him to give it to her.

Sookie, Bill and Jessica arrive in Dallas, where Sookie is drunk and a stretch limo os there to greet her. The driver is acting weird, telling Sookie to get into the car and she reads his mind and realizes he’s up to something. When he grabs her to throw her into the car, Bill bursts out of his coffin and saves her.

Sam arrives at Sookie’s house, which is stuffed with people for Tara’s party. Maryann greets him and he goes off to put down Tara’s gift. Maryann joins him inside the house and Sam warns her not to hurt any of the people he cares about.

Tara’s dancing with Eggs and seems to be having a good time, except she doesn’t really recognize the people at her party. Maryann grabs the gift for Tara’s mother and throws it into the bushes. She then goes to walk off into the woods in the dark.

At the Dallas airport, Bill is questioning the limo driver, Leon. Bill is hypnotizing him in order to get answers and uses this as an opportunity to teach Jessica how to use her vampire powers. Jessica takes over as Bill goes to talk to Sookie. He says the driver was there to kidnap her and suggests it might be the Fellowship of the Sun Church. 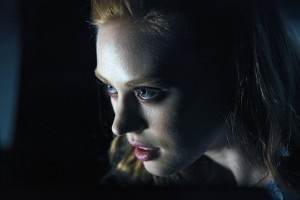 At the camp, Jason tells his bunk-mates that he’s going to be a Soldier of the Sun. Luke is jealous and Jason is happy to rub his face in it. Luke reveals that he and 13 other people were actually chosen, but Jason is the only one bunking at the Nolan’s house. Luke suggests that Sarah wants to sleep with Jason and he becomes defensive.

Sookie and Bill arrive at the hotel and are checking in. Jessica is still hypnotizing Leon and asks him to turn over his cell phone. She starts to freak him out and tells him to scream out some obscenities and cause a scene. Bill chastises her.

Maryann’s chanting some distance from the party and causes a big gust of wind. The people in the party start getting all freaky sexual again. Tara and Eggs drift off to a bedroom to have sex.

Lafayette is watching a movie at his house when Eric creeps up and comes to his house. Eric offers Lafayette is blood in order to heal him and Lafayette seems tempted, though he refuses. Eric says his leg is infected. Eric reveals that he wants to keep track of Lafayette in order to keep tabs on those who are important to Sookie. Lafayette agrees.

Inside the hotel room, Bill is now talking to Leon and he’s pissed that Jessica freaked him out. Leon reveals that the Fellowship of the Sun hired him to abduct Sookie. He says the church knows that vampires are using a human (Sookie) to find Godric, but he doesn’t know where Godric is. Bill plants the thought in Leon’s head that they never arrived in Dallas and tells him to relay that information to the church.

Lafayette drinks from Eric and Eric pushes him away when Bill calls. Bill is pissed that Eric didn’t warn them about the church, but Eric insists that he’s in charge and doesn’t answer to Bill. He does reveal, however, that he had his suspicions about the church. Lafayette starts crazy dancing in the background, obviously healed. 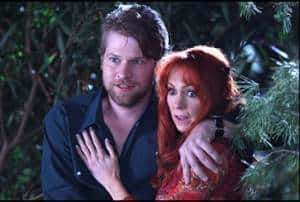 Sarah greets Jason, who’s unpacking in his room at the Nolan’s house. She’s in a little white nightgown and starts chatting him up. He asks if he’s the only one staying in the house with them and she says he is. She also reveals that they have the highest hopes for him and he keeps staring at her.

Cut to Bill and Sookie making out in their hotel room. Eric interrupts them by stopping by and tells Bill to meet him in the bar.

Bill asks Eric why he cares about Godric. He also reveals that there are vampire kings and queens of different territories. Eric says he’s worried, because if someone as powerful as Godric can be kidnapped by humans, none of them are safe. Eric says there’s no way for Bill to get Sookie out of her deal.

Back at Sookie’s house, Sam and Dawn are flirting hard core, which leads to kissing and feeding each other food. Sam stops, saying this isn’t a good idea, but she wants to continue. He wants to tell her something, but she stops him. Because, apparently, she knows what he is. And then she leads him off to another room as the sex dancing continues outside and Tara and Eggs are going at it upstairs. Maryann is vibrating out in the woods as Andy walks drunkenly through the crowd. Then everyone weirdly starts rubbing food all over their faces and getting weird black eyes. In the midst of all this craziness, Maryann’s hangs turn into demon hands.

There’s a knock on the hotel room door and a bellman delivers a man for Jessica to snack on, because apparently this is a really good hotel that caters to vampires and their proclivities. Sookie watches Jessica and her man go off into the next room and the bellman (Barry) reads her thoughts, promoting Sookie to realize she’s not the only mind-reader in Dallas. He gets freaked out when she realizes his secret and runs off while Sookie follows him.