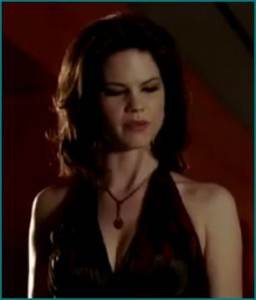 We open in a bar, where Eric is drinking from a cheap girl (ie. hoochie) and abruptly stops when she calls him ‘baby’. We see a mysterious woman with a long dress walk by and Eric tells her to wait a moment and dismisses the hoochie. The mysterious woman is Lorena, Bill’s sire/maker. Oh, Eric, did you bring Lorena in to cause a riff between Bill and Sookie in an attempt to get Sookie for yourself? Because if you did, and if I’ve managed to figure out your plan in the first paragraph of this recap, then I’m going to be very disappointed.

By the way, I’m really sorry that I didn’t post this recap on Monday night as I usually do, but on Sunday I spilled water all over my brand new MacBook and completely destroyed it. As I told my fellow TVovermind writer, Jo, that sort of experience crushes your soul.

Sookie and Bill are waking up in the hotel room when a knock sounds at the door. It’s Isabel, the vampire from the previous episode, and Hugo (who apparently belongs to Isabel). Isabel offers Hugo to help Sookie with her Fellowship infiltration.

Back in the bar, Eric is telling Lorena that he wants Sookie. *Sigh* Really? So I was right about your plan then? Greaaaat. Lorena pretends she’s not interested in Bill anymore, since they’ve been apart for 70 years, but Eric doesn’t buy it.

HA! Then there’s a flashback to Chicago in 1926, where Bill’s playing the piano at a house party, complete with girls in short hair and flapper dresses. Stephen Moyer doesn’t have a bad voice, but the whole set-up is hilarious. Lorena’s chatting with some the guests and pretending to be French. Lorena offers to swing with another couple who are into it. Finished with his song, Bill strides (seriously, there’s no other word for it) across the room to speak to the couple with a ridiculous French accent. 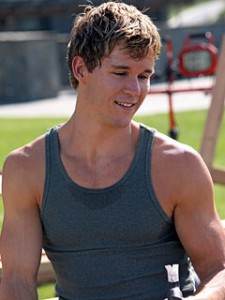 In Bon Temps, Sam and Daphne are nekkid. Sam asks Daphne about the scars on her back, but she says she doesn’t know what jumped her. She says she was very sick after the attack but survived. Oh, they’re nekkid on a pool table. That’s a new one. Sam admits that Sookie knows he’s a shape-shifter but he’s not broadcasting his identity around town because it could be dangerous.

At Sookie’s house, Tara is on the phone, trying to track down a pump for a water heater, while Maryann, Eggs and Carl are in the kitchen. Maryann’s acting mean about not having a hot shower and tells Tara and Eggs to go and pick up the pump.

Jason and Luke are heading for a meeting at the Fellowship camp. Steve and Sarah are waiting to greet them. The Newlins ask the boys to build a platform but Jason asks whether they should be back at the camp training. Jason wonders whether Steve knows about him having an affair with his wife, but Steve seems in the dark. Steve reveals they’re building the platform for a ‘meet the sun ceremony’, which involves watching a vampire burn to death at dawn. Jason is a bit horrified.

Hugo and Sookie are discussing their cover for the Fellowship infiltration: they’re supposed to be a married couple. Sookie wants to know about Hugo and Isabel’s relationship and he tells her. He reveals that Isabel doesn’t want to talk to him about changing him into a vampire, even though he seems to want it. Sookie seems bothered by that.

In the car, Tara’s mimicking Maryann’s pissy mood. Eggs seems to notice something weird and talks about an approaching landmark, even though he says he’s never been on this road before. They pull up at the landmark (a trailer) and he goes to investigate. 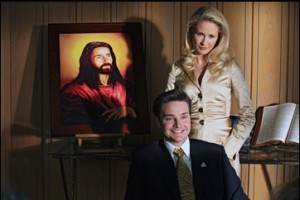 At Merlotte’s, Arlene seems to be dating Terry now and Daphne’s still a terrible waitress. Andy Bellefleur stops by to talk to Lafayette about his recent disappearance and return. He also wonders whether Lafayette might have been involved in Miss Jeanette’s death. Lafayette has a strange reaction to Andy’s tirade. He hallucinates that Andy is Eric. Terry intercedes on Lafayette’s behalf and sends Andy on his way.

Hoyt storms into Merlotte’s to confront his mother, who cut off his phone. She thinks that Jessica is after Hoyt for his money (which he doesn’t have) and it sounds like Hoyt’s Mama is just a crazy person. Hoyt tells his mother and her friend that Jessica is a vampire, but he’s still going to date her damnit!, and this freaks the ladies out.

Sam flirts with Daphne and asks her to play hookie with him and go shape-shift.

Jason and Luke are building the platform at the camp. Jason wants to admit that he’s had an affair with Sarah, but doesn’t because Luke’s all about chastity before marriage. Jason wonders whether he can be abstinent, but he’s about as committed to that idea as Bristol Palin (BURN! Teehee!) Sarah greets Hugo and Sookie as they arrive at the camp (oh, Sookie and Hugo are actually engaged, not married). Sookie tries to get in with the Newlins by saying their old pastor was a vampire sympathizer. She reads Steve’s mind about the platform and the meet the sun ceremony.

At the hotel, Lorena is reminiscing about that time in 1926 when she and Bill started eating that swinging couple. Bill kills the wife while the husband looks on, screaming, until Lorena snaps his neck (seems like a waste). Bills take the necklace off the dying wife and gives it to Lorena. Lorena tells Bill she loves him and the two of them….fornicate…in the blood of the dying wife. Sex AND violence in one scene. Way to kill two birds with one stone.

In the forest, Tara is pissed that Eggs has been leading her somewhere he doesn’t recognize for the last 45 minutes. They come across a fire pit with discarded clothes. Eggs says he recognizes the place and something bad happened there. They find blood staining a rock and Eggs seems disturbed.

Drunk Andy’s driving down the road when he spots Doggy Sam and Pig Daphne, but they run off. The couple changes back into their human forms in the forest and then….there’s sex stuff.

Pam confronts Lafayette in the Merlotte’s freezer. He isn’t happy to see her and she tells him he needs to get back into the V selling business.

Steve wants to take Sookie and Hugo down to his father’s tomb in the lower level, but Sarah tries to dissuade him. Sookie definitely doesn’t want to go and when she tries to leave, Steve and Gabe drag the couple down the stairs as Sarah looks on, not happy with what’s happening. Steve thinks that Sookie is on V.

In the hotel, Bill is obviously aware that Sookie is in danger, but Lorena climbs on top of him to get his attention and holds him back from helping Sookie. She holds him down and kisses him as Sookie and Hugo are dragged into the basement. 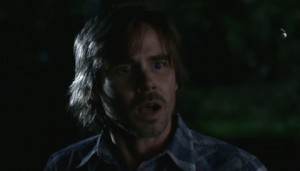 Jessica awakens in her hotel room and is obviously upset to find no message from Hoyt. She takes two bottles of True Blood from the mini bar and dumps the blood, just as Hoyt knocks on the hotel door. He comes bearing flowers (so cute!). She’s delighted to see him and they kiss.

Jason enters the church, calling out for the Newlins. He finds Sarah crying up on the church balcony. Sarah says Steve isn’t the man she thought he was, but Jason defends Steve and says they’re the ones who did something wrong. Sarah admits that Jason and the others aren’t being trained for defence, but to start a war.

Jason comforts Sarah and she tries to kiss him again, but he pulls away. Sarah says she’s meant to be with Jason, not her husband. Then they start making out and undressing each other.