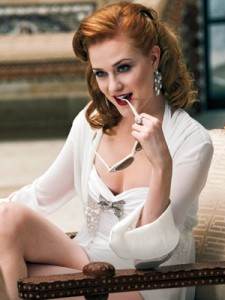 We open this week’s episode with a double-entendre……Bill has arrived at the vampire queen’s house to find a woman writhing on a bench while the queen’s sucking at…..her femoral artery. What were you people thinking? Down, boys. The queen, played by Evan Rachel Wood, invites Bill to join her.

Back at the queen’s house (which is gorgeous, by the way), the queen (Sophie-Anne) wonders why Bill is rejecting her offer to share a drink and calls him a snob. Bill explains why he’s there: he wants information on how to kill a maenad. Sophie-Anne says there’s no way for Bill to kill Maryann. Sophie-Anne is using a mirror and compact. Wait….can these vampires see their reflection? Are they taking liberties with this? I can’t remember. Sophie-Anne explains that Maryann is no longer human, which is why her blood poisoned Bill. Sophie-Anne reveals that she knows all about Sookie and then invites Bill to spend the day.

Back in Bon Temps, Tara wants to save Eggs, but Sookie wants to wait until Bill comes back to help them. They hear screaming outside and Lafayette says that Maryann is coming for Tara. He grabs a gun and then cuffs Tara to a table to stop her from leaving. Lafayette goes outside to head the posse off while Tara and Lettie Mae remain inside. Lettie Mae starts to sob.

Inside Merlotte’s, Sam tells Jason and Andy about his shape-shifting ability. Sam just tells the boys to leave because they can’t stop Maryann, but Jason is gung-ho to gather weapons and fight. Oh God, Jason is so hot when he’s quoting scripture. Sam sees someone running away outside and goes out to investigate. He sees Arlene’s two young children who ask him to hide and feed them. Jason and Andy come outside, telling Sam that they’re going to leave and fight. Sam calls Jason a damn fool and then takes the kids inside as Jason and Andy drive off. 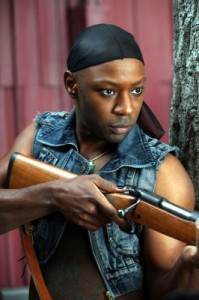 Lafayette is standing guard on his porch, along with Sookie. Sookie gets a text from Bill and reveals that she’s working for Eric, which surprises Lafayette. She also reveals that Bill’s not coming back until tomorrow.

Inside the house, Tara begs her mother to let her go to save the man she loves, but Lettie Mae refuses.

Outside, Lafayette what it was like for Sookie to be inside Tara’s head. Sookie talks some mumbo jumbo about the infiniteness (it’s not a word, but whatever) of the experience.

At Merlotte’s, Sam’s feeding the kids and is trying to explain what happened to Arlene. The kids say Arlene seems crazy and asks whether Vampire Bill could help. The kids ask if Sam knows any other vampires that could help.

Lafayette tells Sookie that he drank Eric’s blood to heal his leg and they compare stories of how they’re both having sex dreams about Eric. Lettie Mae runs outside, crying, and refuses to stay inside with Tara. Turns out Lettie Mae is handy with a gun and once Lafayette hands it over, she turns it on Lafayette and Sookie. Sookie takes the cuff keys from Lafayette and goes inside. Lafayette hallucinates that Lettie Mae is Eric. Sookie and Tara exit and Sookie hands over the keys to the car, but not before calling Tara a ‘f*king idiot’.

Jason and Andy pull up in front of town hall to find a lady running around in her panties. Jason’s determined to save the town. They both go inside to the police station to find some crazy woman manning the desk. Jason takes one for the team (letting the crazy girl crawl all over him) while Andy goes to get some weapons. Sheriff Bud interrupts Andy to dance but then runs off. 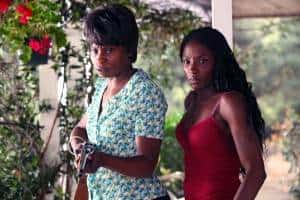 Lafayette’s still shaking on the floor of the porch while Sookie says she’s going to make a move against Lettie Mae, who’s still holding a gun on them. Sookie throws a statute at Lettie Mae and they grab the gun and drive off to get Tara.

In his truck, the kids are questioning Sam about their father. Turns out Sam’s in the parking lot of Fangtasia and when the human lady who takes care of the place comes by, Sam goes to talk to her. Sam bribes her to let them stick around until dark.

Lafayette and Sookie are driving and Sookie tells him to suck it up. Also, to shoot Maryann in the head if she attacks them.

Arlene, Terry and a group of people arrive to tell Maryann that the God Who Comes came and killed Sam. Maryann calls them idiots and orders them out. She is really pissed.

Jason’s tied the crazy girl to a chair and is questioning her about the weapons they have. A cop comes by, pointing a gun to Jason’s head. Andy comes by with a shotgun, but the cop shoots him. Fortunately, Andy was wearing kevlar.

Hoyt’s back at his mother’s house and she’s making some nasty dinner. Mama Hoyt says they need to leave, but Hoyt wants to protect his mother. She also reveals that his father was a closet drunk (and maybe gay) and actually killed himself.

Sookie and Lafayette are staking out her house and Sookie is really pissed that the crazy people are in her house. Arlene and Terry jump down from the tree above and try to take the gun, but Lafayette distracts them with drugs. Sookie takes the opportunity to go inside the house.

At Fangtasia, Eric asks Sam why he should help him. Sam promises to repay the favor at some point in the future, but Eric doesn’t think that’s good enough. Eric says he knows someone who might be able to help. Eric offers to go see ‘her’and I suspect he might be going to get Sophie-Anne. Then he flies away. WTF?! He FLIES? Nuts.

Sookie tries to sneak into the back door of the house and finds another crazy lady cutting off her freaking fingers. EW! She spots organs on the kitchen table and a crazy guy bathing in the kitchen sink. It’s like a fricking house of horrors.

Back at Sophie-Anne’s place, she and Bill are ‘sunning’themselves in her pool room. Bill says he only drinks from Sookie, but Sophie-Anne wonders why he would do that. Bill asks for leave to return to Bon Temps, but instead Sophie-Anne insists that he drink from one of his boys. Bill does.

Lafayette encounters Maryann and Karl in the woods outside Sookie’s house. Lafayette fires his gun, but the bullet ricochets off Maryann’s hand and hits Karl in the head, killing him.

Back at Sophie-Anne’s the group is playing Yahtzee. Hilarious. Bill goes to leave but Sophie-Anne starts to mention about the God Who Comes. She says the god will never come but in order for Maryann to leave she has to believe that she has summoned Dionysus. Apparently maenads prefers a supernatural being as a vessel to bring forth the god (but not vampires). Oh, the lady Sophie-Anne was drinking from also happens to be Sookie’s cousin and she asks about Sookie. Sophie-Anne reveals that Eric has arrived, which Bill takes as his cue to leave. 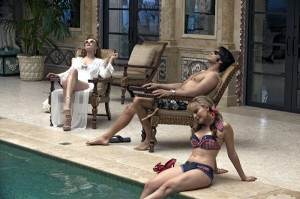 As Bill leaves, he encounters Eric in the courtyard and Bill wonders if Eric is just helping to look like a hero to Sookie. Bill warns Eric to stay away from Sookie or he’ll tell the queen that Eric is forcing humans to sell V for him. This seems to frighten Eric.

Jason and Andy park in the woods so they can sneak up on the group. Jason asks Andy why he doesn’t like him and Andy says he thinks Jason’s had it too easy, but Jason disagrees. The boys eventually bond, exit the car and grab their weapons.

Sam’s back at his trailer when Bill arrives. The two stare silently and ominously at each other.

Back at her house, Sookie is still being spooned by the coroner on her kitchen floor. She knocks him out with a frying pan and then makes her way upstairs. She finds Tara and Eggs inside her gran’s bedroom, smashing up her things. Looks like Tara and Eggs are building a nest on the bed. And there’s a giant egg in the middle of it. Lafayette enters the room, with black eyes of his own, and Sookie screams.