Home
Rectify
Rectify Review: The Tires They Are A-Changin’ 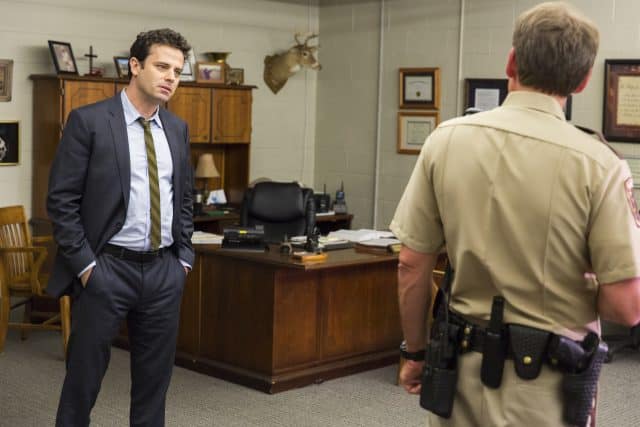 Every time I watch a new episode, I get sadder and sadder thatÂ RectifyÂ is ending. Everything aboutÂ RectifyÂ feels so real and genuine, it’s like I’m watching real life play out. The acting is so nuanced and realistic, and I will sorely miss watching this show when it ends in just a few short weeks.

This week onÂ Rectify:Â Amantha reconnects with an old friend. Teddy officially moves into Amantha’s apartment and meets Melvin. Daniel has a new roommate at the halfway house, and goes to a party put on by the art gallery. A company calls Janet, wanting to make an offer to purchase the tire store. Jon Stern comes back to town and confronts Sheriff Daggett about the new evidence that emerged. Tawney contemplates divorce.

All of the things that happened in the episode, perhaps with exception of Jon Stern seeking justice, sound like things that could be said about real people that you know. So much of this is realistic and slice of life that it could be happening to anyone. It’s so easy to relate to. The dialogue and direction of each episode is so meticulously crafted to feel real, that it does.

I wonder if there is going to be a gap filled in somewhere in which Jon Stern quit his job. Last we saw, they weren’t going to let him return to Paulie to investigate things, and now he’s there. So I wonder if he sees Amantha and/or Janet again if this will be revealed. Maybe he’s convinced someone to let him come or just skipped out on his new assignment to come back, but I’m more inclined to think that he’s become so obsessed with the injustices against Daniel committed by (then DA, now Senator) Foulkes, that he has to find out what happened. Jon Stern represents a large chunk of this show’s viewership that HAS to know what happened to Hanna Dean that night. I’m among those viewers. I want to know so badly.

But, the good news is that the beauty and realism ofÂ RectifyÂ is too overwhelming to care. All of the acting, camera-work, direction, and small moments contribute to a true work of art. Daniel had a beautiful interaction with the pregnant woman who works at the art gallery. Tawney had a beautiful moment of clarity when she was speaking with her marriage counselor. The greatest of these, though, came from Amantha and Nathan Darrow’s Billy Harris. The show may finally have realized how funny Amantha is as a character, which made everything will Billy so fun to watch. It was just two friends (ok, probably more than that) reminiscing about people from high school, but it was just such a great scene in every way.

Here are few other thoughts I had:

All in all, another wonderful episode. I’m hoping to see more excitement and passion from Jon Stern, and peace for all of the others.

Jon Stern returns to Paulie, while the personal lives of each character move forward on this week’s compelling episode of Rectify.