Home
Entertainment
Red Heat Could Admittedly Be a Cool Reboot 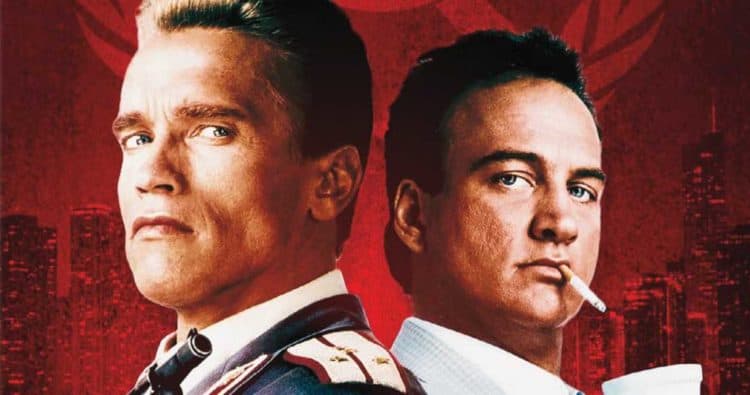 I’m definitely not the type to say ‘yay reboots and remakes’ but there are times when movies could stand a touch-up now and again, but Red Heat would need a tad more than this since it would require two individuals that could step up to the plate and do what Schwarzenegger and Belushi were able to do back in the 80s. If you need to be reminded of this movie you might be too young to remember or you might not have really gotten into the whole macho buddy-cop movie scene. At one point it was one of the most iconic genres in show business but it would almost seem that it’s simply too much these days what with ‘toxic masculinity’ being called out if a man acts like a man, y’know, the stereotypical alpha male behavior that at one point and time was pretty normal no matter how much some folks would like to say otherwise.

Simply put this is a movie where men get to act like men even if it’s violent, sarcastic, and overly aggressive. It’s one of the quintessential 80s movies that didn’t bother confuse us by trying to sort out our feelings or those of the characters and just went in to kick some major ass and worry about the fallout later. The only problem with a reboot? You simply know that Hollywood is going to take it and wring the fun right out of it, and for no better reason than to admit that it’s become a rather weak and even whipped version of its former self. So it’s fair to say that the old days weren’t perfect, they weren’t as PC as things try to be now. That’s why we loved it though. That’s why people went to the theater, that’s why they bought VHS tapes and VCR’s, because the movies were actually original and did something that they don’t seem interested in today, they ENTERTAINED us. They didn’t preach, they didn’t try to make us feel as though the years that came before were lawless and somehow akin to the Dark Ages, they simply put something on the screen that was great to watch since it was a couple hours of entertainment, pure and simple.

If a reboot of this movie is to come out then it needs to go back to the hard-hitting, skull-bashing times that it came from and simply seek to entertain the crowd. Education on what’s PC and what’s not isn’t what we go to the movies for. The time we spend in the theater is a reprieve from reality, not a desperate call to see it mirrored on the big screen. Arnold and James were golden in this movie no matter what people want to say since they created a reluctant duo that was out for the same purpose but did things in their own manner. Going after a drug dealer was the goal, putting him down was the endgame, and there was nothing more to it than that. Sure they were both out for revenge, but that only added spice to the movie since quite honestly that’s one of the best stories in the world, revenge. If PC culture gets hold of this movie, the reboot is going to be a disaster without question since these days it takes someone that’s willing to upset more than a few people when it comes to making movies such as this. Christian Toto of The Hill makes a pretty good point about how the PC culture has affected pop culture.

Red Heat is a simple story and one that’s not too hard to think about, which could be one reason why it’s not on the table as we speak since so many directors and producers want to get tricky with their stories these days to appease an audience that’s wanting to be confused for some reason. This movie is pretty simple, the bad guys do bad stuff, the good guys are trying to stop them from doing bad stuff, the bad guys kill a couple of the good guys so the remaining good guys go after them and eventually kill the bad guys. How hard is that? Obviously there’s more to it and there’s a lot more to do with fleshing it out, but the basic principle is good guys and bad guys, that’s not too hard. The fact that anyone would want to complicate this is a sign of the times that we live in and honestly and truly watching either of these men show that much emotion or cry in any way would only serve to ruin it even if it’s established that emotions don’t make a person any less of a man.

This reboot could work if it was kept as close to the source material as it could get, and while it might seriously upset any over-sensitive viewers that believe that it’s toxic masculinity at its best, the end result would likely be far better than if it was made to adhere to PC culture.