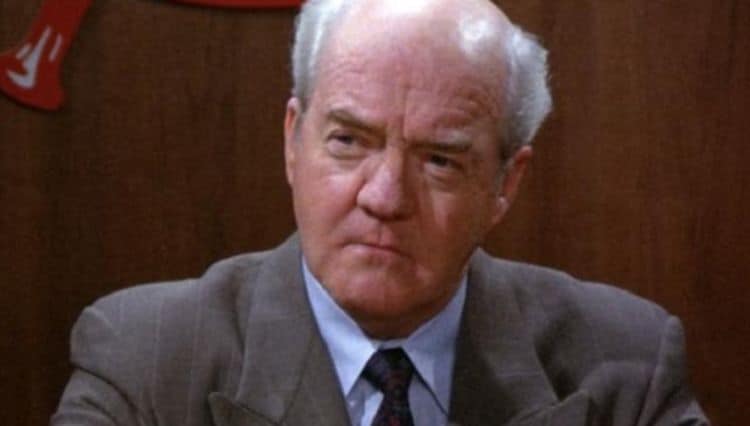 There are a lot of things to say about Richard Herd, but one of them has to be that he had a long and very full career even if people don’t recognize him or know where they’ve seen him before. Between TV and the movies he was the kind of guy that had been there and done that and put up a long line of memorable roles for those that watched him. As far as being a lead it wasn’t what he was known for at all times and it didn’t happen that often, but he played vivid and very entertaining characters all the same that helped move the movie or show along as much as he could and contributed in a way that might have been missed had he been left out. Too many actors get discounted at times because they’re not the lead or the supporting actors or they don’t have a character that people remember that well, but as I’ve said more than once, they’re one of the most important parts of show business when it comes to operating in front of the camera, as they make the leads look better and give them someone to work with and play off of in an attempt to do their job to the best of their ability.

Herd had plenty of notable roles throughout his long career and appeared on more shows than a person could easily remember since he started up back in the 70s, but it’s fair to state that what roles he did take usually ended up last for a handful of episodes or more or were guest spots that saw him come and go. He did have a few notable movie appearances that are highly memorable since the movies in question were absolutely great and the characters he played were either important to the plot or memorable in some other way. One memory that comes to mind is the character of Angus MacLachlan from Summer Rental with John Candy and Rip Torn. Angus wasn’t exactly a central character but he was still funny enough to notice as near the end of the movie when the group was trying to prepare the ship, formerly a restaurant, for the big race, Angus was seen driving far and wide for a ‘grand sally’ so that the Barnacle could win the day. So really he kind of was one of the hero’s of the movie since without his help the story wouldn’t have been able to progress, well maybe it would but it would have taken someone else that was as hard to understand and just as funny in the process. Angus was the kind of Scotsman that has his own way of talking that might be completely understandable to some, but was nearly incomprehensible to others, hence the comedy of it.

That’s another part of what made Herd so effective however, he could play a wide variety of roles and adapt quickly to each one as needed in order to make it work. Herd wasn’t exactly a young man when made his way to show business but he definitely made up for not starting younger as many people do by amassing a large number of roles throughout the years that made him known to a great many people and created a reputation that he lived up to in a big way. Chris Koseluk of The Hollywood Reporter had more to say on the subject. Some people might ask ‘what reputation’ but the fact is that Herd was one of those that was as solid as they come when describing him as someone that could handle various roles across different genres. It’s hard for some folks to admit this, but there are those actors that have a serious block when it comes to acting in any genre that’s outside their comfort zone, and it tends to show a lot of times since said actors will tend to behave in a manner that’s contrary to their usual performance. Herd didn’t really have that problem since he was able to switch from one genre to another, taking on one character role after another as he needed to since that’s the business, acting. It would appear that some folks in show business forget that people do like to see actors change it up every now and again, since keeping it the same can be a little boring after a while.

Sadly, Richard passed away recently in his home after a long battle with cancer. It does feel as though a lot of the old favorites are starting to pass when it comes to show business while some of those that people thought would never last are sticking around somehow. It’s a hard realization to take in, but actors do tend to pass on from time to time and there are moments when the frequency appears to be increasing. The best we can do is acknowledge who they were and what they did however, and be grateful they were around for so long. Rest in peace sir.