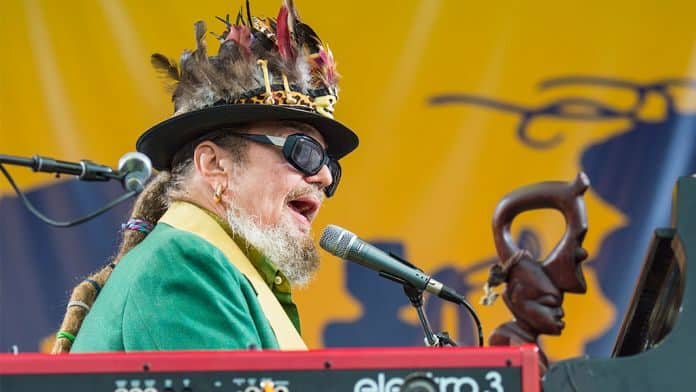 For all those that proudly say ‘let your freak flag fly’ it might be prudent to say such a thing about Dr. John, or Malcolm John “Mac” Rebennack, a prominent instrumentalist from the rock and roll era that lit up the city of New Orleans in a big way during his time. As one of the most gifted musicians to ever come out of the Big Easy Dr. John it would seem that he was born to be a musician as Jack Hamilton of Slate writes. It might have seemed that his career would have been dimmed by the fact that his grandfather was a blackface performer, but John wasn’t about to let that ruin his good time as he willfully admitted such and pushed past it in a way that made everyone around him realize one of the most important lessons of the day: you’re not responsible for the sins of those that come before you. If ever there was a notion that needed to be pushed again and again, this would be it. Sadly Dr. John passed away on June 6th of a heart attack at the age of 77.

Coming from a family that valued music and all its charms John had a great upbringing when it came to his love for different styles and flavors of music and would actually skip school to experience the musical joy of the New Orleans juke joints when he was still very young. It didn’t take him long to start participating on his own time and while the piano came to be his greatest tool of the trade he did start out on the guitar and became quite the sensation. From the classics to music of his own design John paid his dues as he moved on up the popularity scale and finally released a solo recording, Storm Warning, back in the late 1950s. It almost seems sad to say that his first solo outing wasn’t all that well-received but it would have been sadder still if he would have let that minor failure cause him to quit. If not for being shot in the finger he might have continued on the guitar, but then we wouldn’t have been able to hear just how great he could be on the piano for all these years.

To be honest he didn’t become Dr. John up until the late 60s when he came out with the album Gris-Gris, which was a mixture of music that was highly ambitious and, as fans would tell it, one of the most inspired albums that ever came from his talented mind. Gris-Gris was a roots record that brought Dr. John’s talent into a light that made it clear that as grandiose and as celebrated as others were, they weren’t bound to compete with the overall feeling that his album could give. That it became an underground hit wasn’t a detriment in the least, as it became something that’s stuck around for quite a while and has earned him the kind of accolades that still to this day make his music something inherently special.

You’ve likely heard the song Right Place, Wrong Time, which is something that many people can claim even if they don’t know who sang the song. This is the power and influence of Dr. John’s voice though, it was something that served up the kind of inspiration and feeling that anyone could do just about anything they want. In the music industry there are those that can entertain and those that can inspire, and Dr. John managed to do both, though he definitely inspired a lot of people in his time as you can imagine. As Alison Fensterstock of NPR has mentioned he even inspired the creation of one of the Muppets, Dr. Teeth, if you can imagine that.

Unfortunately Dr. John did have his vices as his came in the form of a heroin addiction that he would keep until around the 80s. Thankfully when he kicked it he was still considered to be one of the top stars in New Orleans despite the fact that his stardom had just about disappeared elsewhere. In local culture he was still someone to look up to and someone that really gave the city of New Orleans another face that could be depended on as someone who would grant others an authentic look into the music scene. What’s even greater about him though is that as his popularity waned he never really attempted any ludicrous or outlandish scheme to get it back, he was good with being a local legend and was more than happy to simply keep doing what he was doing. Legends come and go, but the truly epic individuals that are worth remembering are those that know when the party is over but still keep things going as much as they can and never turn their back on the people that helped them reach for their dreams. Dr. John was a truly interesting and inspiration individual, and he’s going to be missed. Bonnie Stiernberg of Billboard reported that he was given a proper sendoff as one might hope for and expect. Hopefully people will continue to remember his name in the Big Easy for many generations to come. Rest in peace sir.