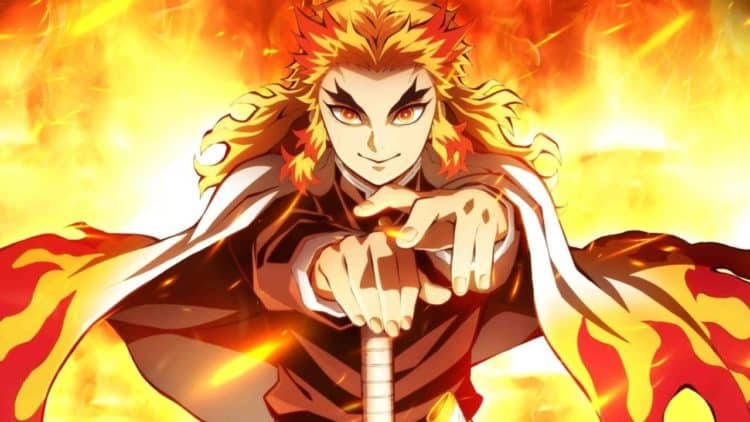 The plot for Demon Slayer: Mugen Train was very unusual for an anime movie, as it took an arc directly from the Demon Slayer manga and turned it into a two hour movie. What’s surprising about this is that most anime movies are not canon. Take My Hero Academia: Two Heroes and My Hero Academia: Heroes Rising, for instance; both of these movies take place in the same My Hero Academia world that we have come to know and love, but it isn’t important if you’ve seen the movie or not if you want to understand what happens in the rest of the anime, nor do the events of either movie actually occur in the manga. Both of these movies have completely isolated stories that are, in no way, reflected in the main storyline of the anime. Demon Slayer: Mugen Train, on the other hand, takes the Mugen Train arc directly from the manga, and picks up right where Season 1 left off as Tanjiro, Inosuke, and Zenitsu board the Mugen Train in search of Rengoku, the Flame Hashira, in order to assist him on his job to hunt down the demon on the Mugen Train. As the trio boards the train, they find Rengoku as he shouts “Delicious” over and over again, leaving them speechless and confused. After a few minutes of introduction, someone comes around to punch their tickets, but unfortunately this is what causes the Demon Slayers to fall into a deep slumber at the hands of the Lower Moon One demon. Tanjiro wakes up in a forest surrounded by snow as he is greeted by his long lost siblings. He runs toward them as he begins to lose himself in this dream world concocted by Lower Moon One. Eventually, Tanjiro is able to break free from the dream by letting go of his family and cutting his own throat. The others are also caught in their own dream worlds at the same time, though Rengoku is the only other one that is somewhat able to break free of the dream as he has a survival instinct that is unmatched. Fast-forward a bit into the film, and Tanjiro finds Lower Moon One on top of the train, and is able to counter the demon’s Blood Demon Art by committing suicide each and every time he falls victim to the attack. At last, Tanjiro is shown a nightmare rather than a sweet and loving dream that shakes him to the core. This nightmare displays his family once again, however they are covered in blood and saying horrible things about how he failed to save them. Tanjiro wakes from this nightmare with the fury of a thousand suns as he is filled with rage from the demon insulting his family like that, and immediately cuts through the demon’s throat. Unfortunately, it doesn’t look like that’s the end of it all as the demon then reveals its body is the entire Mugen Train itself, and that the Demon Slayers will be forced to find the true head if they wish to kill him. After the others wake up and the demon begins to take its true form, both Tanjiro and Inosuke fight their way to the front of the train as the demon’s head is the first car. Eventually, Tanjiro is deceived by so many dreams that he is about to accidentally cut his throat in reality when Inosuke arrives to stop him. They synchronize their attacks and then kill the demon. Movie over, right? Nope, then an Upper Rank demon known as Akaza, or Upper Moon Three, shows up and fights a long battle with Rengoku. That’s where I’ll leave off with the story, so that you can watch for yourself to fill in the rest of the details and see how the movie ends.

As far as the animation goes, the beginning of the film felt almost real. It was a much different experience than as a regular show. There were bits and pieces of this much more complex animation style, however, for the most part of the movie, it just felt like Demon Slayer: Mugen Train was an animated version of the Mugen Train arc. Now, there’s absolutely nothing wrong with that, but it just kind of felt like I was watching four episodes of the anime strung together, rather than an actual movie. I still loved the animation in it, because the Demon Slayer animation style is absolutely breathtaking, but other than a few things here and there, it didn’t really feel much different.

Overall, I loved the movie. I was expecting a lot more filler from the film, as the Mugen Train arc isn’t all that long, and I was wondering why this arc specifically justified a movie, but I was pleasantly surprised how little filler there was. The voice acting was also spot-on as always, and you could feel the emotion from every line delivered from each character in the movie. Demon Slayer: Mugen Train is definitely a welcome appetizer to Demon Slayer Season 2, which will hopefully be coming soon. Now, we just wait for the upcoming Demon Slayer Hinokami Keppuutan game that will hopefully release sometime in 2021 as well, barring any delays.