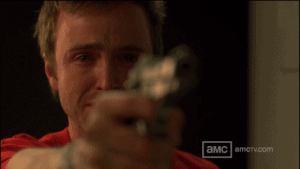 Jesse, about to pull the trigger.

Last week’s “Half Measures” just might have been the finest hour in the shows three year run. This week’s season finale, entitled “Full Measure,” doubled up and blew it out of the water. Season two was a step up from season one, and now that season three has concluded, it’s plain to see that it was a few steps up from season two.

As always, tense moments and plot twists permeate the show. Vince Gilligan created this well-oiled machine that is being driven by Bryan Cranston (Walt) and Aaron Paul (Jesse), two actors at the very top of their game. There are not enough good things to say about these two men, and Gilligan as well for writing and directing the episode. The scene at the beginning where Walt stands up to Gus and presents him with two options (one of which was to kill him right there and now) showed a character cool under pressure with no fear, as did the scene where he makes his last-ditch attempt to save his life. You’ve come a long way, Walter. Jesse may have only had a minor role in the episode, but fans will not forget the final scene of the season; the emotion on his face and the tears in his eyes before pulling the trigger was one hell of a way to send off one hell of a season and keep us all counting down the days until season four premieres. On that note, it was announced just before the finale that the show has indeed been renewed by AMC for a fourth season.

The cold open showed a flashback to Walt and Skyler purchasing the house we’ve seen them live in for the duration of the show. You’ve come a long way, Walter. All season we’ve watched Walt go further and further down the meth-rabbit hole, and now he’s really taking Jesse with him on the long, strange, moral-bending trip. Walt, knowing that Gus was planning on killing him and handing the duties of the lab over to his assistant-for-the-second-time Gale, knew that Gale had to go. Walt’s plan was simple; if Gale wasn’t around to take over the lab, Gus wouldn’t be able to kill the only cook he had let: Walt. Upon realizing his murder was imminent, Walt offered to turn Jesse in, but only so he’d be allowed to frantically call his partner and inform him that he’d need to be the one to kill Gale for him, ensuring that Walt would be invaluable to Gus as the only cook left, and thus he’d be able to live. Walt has been able to find his way out of tough spots before. His career and family were on the line when he and Jesse were stuck inside the RV with Hank banging on the door, but that was nothing compared to this. His life was at stake, and there was no time for half-measures. He was able to spare himself, but in return forced his partner to commit murder. You’ve come a long way, Walter. You’re no longer the same man you were when we met you three years ago, and to even begin to try to define the man you are now would be fruitless. Have you truly become the bad guy or are you just doing everything you can to survive? Is it both?

These questions and more will be undoubtedly be explored in season four. There are plenty of choices on television, but not a single one of them “Measure” up to Breaking Bad.