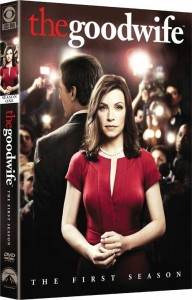 The Emmy-winning CBS series The Good Wife arrives on DVD a week from today, on September 14. We have the advance review of what many consider to be the season’s best drama. Does the home release live up to the show’s high standards?

I don’t know if I’d say this was the best drama of this past TV season (I’d side with FX’s Justified in that category), but The Good Wife certainly captured everyone’s attention for a variety of reasons. Julianna Margulies found a legal drama that better showcased her skills than Canterbury’s Law, and she won a Golden Globe and a SAG Award for it, as well as an Emmy nomination. She was also joined by an able ensemble including the vastly underrated Josh Charles (Sports Night), Chris Noth (Law & Order), and Emmy nominees Christine Baranski and Archie Panjabi, the latter of whom won the award for stealing plenty of scenes. The series is only going to get better with the addition of Michael Ealy and the retention of Alan Cumming.

If you’re not familiar with the show, here’s a brief primer: Alicia Florrick (Margulies) goes back to work as a lawyer after her husband, State’s Attorney Peter Florrick (Noth), is exposed in a sex scandal. His subsequent jail time leaves Alicia no choice but to deal with the fallout from the scandal while trying to parent their two children and restart a career she hasn’t had in thirteen years. She joins the firm Stern, Lockhart and Gardner, underneath old college friend Will Gardner (Charles), who carries a torch for her, and Diane Lockhart (Baranski), a reflection of who Alicia could have been. Alicia has an ally in Kalinda (Panjabi), the firm’s PI, but also an opponent in the young and ruthless Cary (Matt Czuchry), who is gunning for her job. The office intrigue and cases that land on Alicia’s desk only compound the personal drama she goes through on a daily basis.

While there’s certainly a lot of legal wrangling, The Good Wife is really a character piece. It’s about Alicia’s journey on her own. It’s about her relationships with the men in her life. It’s about her children and their relationships with their parents. It could have easily become something sensationalized and melodramatic, but it isn’t, largely because it’s anchored by Margulies, who’s been around the block a ton of times before. It’s also great to see actors getting recognized whom you wouldn’t expect to be there – Josh Charles, whose career never quite took off the way it should after Sports Night, has finally found his next big show. Christine Baranski is always dependable. Alan Cumming’s arrival gives the show a shot in the arm, and Panjabi is a long way from her brief work on the UK’s Life on Mars. This show is a perfect example of how when you have a great script, you can get amazing actors.

I’m curious to see where The Good Wife will go in season two, and how it will try and top season one. While I find myself groaning a little at the Alicia/Peter/Will triangle that developed (but that’s the TV cynic in me talking), season one sets the table for a complicated journey. It pulled some cards out that I didn’t think the show would do so early, such as Peter’s release from prison, and it’s left a lot of story options for the next season. I just hope that the show can hold all those together in the next year, but this season was certainly worth watching.

There was one troubling thing about this release before I’d even opened it: the packaging. It was rattling before I even opened the shrink wrap, and once I got inside and opened the hard case, I was greeted with a flurry of little jagged pieces of plastic. The spine that holds the discs so they can be flipped through had half shattered in transit. I spent a few minutes having to dig the pieces out of the case. Hopefully, other people won’t experience the same fate with their copies, because it was one tedious pain to deal with.

The box uses the same art as seen in CBS’s promo posters for the series. Like the show itself, the rear artwork is simple and elegant.

Here’s where I start to have a bit of an issue: rather than include a booklet, CBS has decided to include the episode guide on the inside of the case, meaning you have to flip the discs out of the way – or in the cases of the first and sixth discs, which actually attach to the case itself, remove them to read the episode synopses, or see who’s on the commentaries, or which episodes have the deleted scenes. There’s a lot of information to be had here, which means that it’s also printed in pretty small font. It would be a lot easier if they’d just put all this in a booklet.

For reference, the episodes with commentaries are “Pilot,” “Fleas” and “Heart.” All the commentary tracks (and deleted scenes) feature show co-creators Robert and Michelle King. Producers David W. Zucker and Brooke Kennedy appear on two of the three. The only one with a cast contribution is “Fleas,” which includes Christine Baranski. While it’s always great to hear from the people who created a series – they have a level of insight no one else ever will – I would have loved to see Margulies on a commentary. She’s the titular character and I’m sure she’d have plenty to contribute.

Technical specs-wise, video is in 16:9 widescreen. There are two audio tracks, an English stereo and an English Dolby Digital 5.1, with three sets of subtitles: English, Spanish and Portuguese. In other words, CBS has given us a top of the line presentation for this series. I had no problem viewing it on either my DVD player or my laptop.

There’s a sizeable selection of special features on this release. There are cast and crew commentaries on selected episodes. Likewise, there are deleted scenes on certain episodes that also come with commentary. In addition, CBS has included the on-air promos used throughout the season, and two featurettes.

“The Education of Alicia Florrick: Making Season One” is just that, a comprehensive look at the making of the first season of the series, down to the wardrobe. As it does cover the entire season, you’d be advised to wait on watching it until you’ve seen every episode. The featurette is fascinating, though, because they cover just about everything, from how New York is standing in for Chicago to how there were about a hundred other titles pitched for the series. It goes beyond everyone going ‘oh, this person is so great’. It’s exhaustive and it’s well worth your time.

“Aftermath: Real-Life Events” is a timely featurette which discusses other political scandals similar to that which Alicia Florrick faces. Again, this could have been totally sensationalized, but it’s not. It’s actually kind of interesting, if you’re into the real-life inspiration behind the show and want to go into those kinds of issues.

The Good Wife is a strong character-driven drama, and the DVDs have thorough special features. Even if you’re like me and only saw an episode now and then, it’s still worth picking up and catching up with. It’s definitely worth adding to your collection.