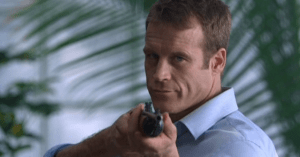 If you take the action hero violence of 24 and mix in a little of the sarcastic humor of House, you’ve basically got Human Target, FOX’s new show which is set to premiere on Sunday, January 17, at 8/7c. The show, which stars Mark Valley (Fringe) as Christopher Chance, the titular Human Target, is FOX’s attempt to mix together some of its more successful elements into one big megashow. And they kinda, sorta pull it off. Barely.

The thing you need to know when going into Human Target is that it is not deep television. In the pilot episode, there are no real gray characters. There are good guys and bad guys, and not much else. There’s little depth and even less characterization, but you don’t care because you’re having such a damn good time.

First, I’ve got to mention the absolutely fantastic cast. As I said before, Mark Valley, most known by television viewers as Olivia’s morally ambiguous boyfriend John Scott on Fringe, plays the main character, Christopher Chance. He’s the perfect action hero; he carries out all his jobs with a self-assured charisma that simply seems infallible, and sometimes annoying to his clients (that is, until he starts saving their lives). In one scene, he meets a Chinese investor who wishes to know how Chance recognized his Japanese dialect. Chance tells him a lengthy story (all in Japanese) about how he came to speak Japanese, though he later tells his client that he completely made the entire story up. He’s also slightly unpredictable, keeping both the viewers and his business partner on their toes.

The business partner is Winston, played by Chi McBride (Pushing Daisies), who serves sort of as Chance’s manager: he gets Chance the jobs, and then helps Chance solve the cases. He and Chance bicker quite a lot over the course of the episode; Winston does quite a lot of eye-rolling, and you find yourself wondering how the two ever came to work together, since Winston seems to despise Chance so much. In fact, it seems the only person that Winston despises more than Chance is hired gun Guerrero. 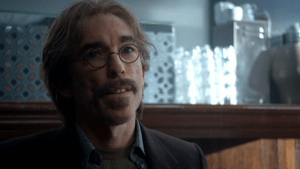 Guerrero is the best character in the bunch, and that’s perhaps due to the fact that he’s played by Jackie Earle Haley, an actor most famous for his roles as Rorschach in Watchmen and as Freddy Kruger in the upcoming Nightmare on Elm Street. Guerrero is easily the most comedic character in the pilot episode; he clashes brilliantly with Winston and can be very threatening, especially considering he’s shorter than most of the people he threatens. When he’s threatened by two muscley goons who want to take him out back and beat him, he replies, “I’ll take the beating, because that’s all you two amateurs are cleared to do. And then one night soon, I’m going to break into your houses and kill each of you in your sleep. I’ll probably start with you, Alfredo. That way Steven here can have a few extra days with Marla and the girls. It’s only fair.” Needless to say, Guerrero does not get beaten up.

The episode itself starts with an introduction, with a gunman in a bank taking the bank’s manager hostage to kill him. However, when he removes his captive’s mask, he finds that his elderly victim has been replaced by a youthful man: Chance. There’s a tense scene set at gunpoint which has a shocking resolution that will have a bit of an impact on the rest of the episode.

However, the main “case” of the episode revolves around a woman, the designer of a new, high-speed train, who believes that someone is trying to kill her. Posing as her bodyguard, he accompanies her on the train’s maiden trip to protect her from the killer, who he believes is going to make his next move on the inescapable train.

Sure enough, the killer does. Masquerading as a waiter on the train, he engages in a lengthy cat and mouse game with Chance and Chance’s client on an uninhabited part of the train. There’s a really, really long action scene in here with a great deal of roundhouse kicks and flying fists; the final, three-minute fight (long for TV standards) ends with the bad guy dying a death that everyone saw coming, but it’s still very cool to watch it happen. Meanwhile Guerrero and Winston try to find out who hired the killer and why. The outcome is not very surprising, or that satisfying; the episode is about action, not whodunit. 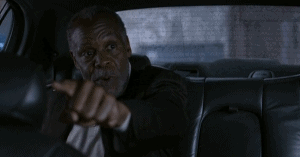 After the case is solved, there’s a small coda (featuring a brief appearance by Danny Glover, which gives the episode a little bit of star power) that sets up what we’ll be seeing in future episodes of Human Target, and it’s more of the same.

That’s not necessarily a bad thing. When you’re in the mood for it, Human Target is a simple-minded, high-octane thriller, with no strings attached. There won’t be much of an overarching plot; it’s just Chance going from job to job and beating up bad guys. Perhaps we’ll learn a bit about Chance’s past, and perhaps he’ll get a love interest.

Overall, Human Target is just fun. It might not be so fun after a full season, but if they keep it as a thirteen-episode midseason replacement, it’ll be a nice little show that shouldn’t be taken too seriously. It won’t be a commitment to watch, but more of a fun when-you-want-to show.

The pilot episode of Human Target will air on Sunday, January 17 at 8/7c, and then will take its regular place on Wednesdays on January 20.