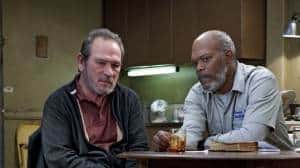 It’s hard not to make this review too personal. As someone who is constantly pondering the nature of life, I found it hard to take a side in the debate between Black (Samuel L. Jackson) and White (Tommy Lee Jones) that forms the entirety of the HBO film The Sunset Limited. Watching the film was an immersive experience; I spent the entire hour and a half determining who I agreed with more. Both the religious Black and the atheist White (that’s how they are credited) said things that fit so well into my own evolving philosophy, and both said things that clashed together with my views entirely. That’s what the film means to do, though. We’re supposed to identify with Black and White as the two sides warring within ourselves, and its up to us to determine which is right – if either.

The film, which is really more of a televised play than a movie, deals with two characters – Black and White – and their discussion as they sit alone in Black’s apartment. Just prior to the events of the film, White, or ‘Professor,’ tried to kill himself by throwing himself in front of the titular train, though he was stopped by Black. Black, having brought White to his apartment, tries to find the reason for White’s suicide attempt, and tries to help White so that it doesn’t happen again.

The film doesn’t leave Black’s apartment, and is almost entirely made up of the two characters debating. It’s an hour and a half of straight dialogue, which sounds like it should be more tiring than it actually is. The characters move across the apartment, back and forth between the kitchen table and the sofa. Early in the film, there’s a small visual gag in which White reclines on a sofa while Black sits in an easy chair behind him – a therapist and his patient.

The Sunset Limited is powerful. That can’t be denied, regardless of whether you liked the film or hated it. It’s impossible not to call it thought-provoking either, despite how cliche that term might be. You can’t make it through the ending of the film without immediately beginning to question which of the two characters was right, or what effects one had on the other. The film’s challenging for the very same reason.

It’s no surprise, though, is it? The film is based on a play by Cormac McCarthy, who brought us both No Country for Old Men and The Road, two very powerful works of literature that were adapted into films (the former winning the 2007 Oscar for Best Picture). McCarthy stuck to his guns while writing this one: life and death are of course at the forefront of the piece.

And who better than Samuel L. Jackson and Tommy Lee Jones to act out those themes? The familiar faces are surprisingly fresh, with both completely stripped down to just themselves. It hardly seems like they’re acting at points – Jones’s sporadic wooden deliveries are the only things that give them away (not to criticize Jones at all, of course – the dialogue’s hard to deliver in any capacity).

Don’t consider this a positive review in the conventional sense. I’m not going to give it my usual letter grade. This film, unlike most others, is a canvas on which to project yourself and your beliefs. It’ll make you think. It might make you cry. It’ll make you examine yourself more closely than any film I’ve seen in a long time. For that reason, I think it should be required watching. Not because you’ll see the same film I saw, but because you’ll see something entirely different.