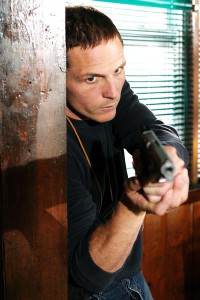 One year, near Thanksgiving, one of my friends made an observation while we were at the grocery store about how many people were buying large quantities of alcohol. ‘Maybe they’re trying to get drunk so they won’t have to deal with all the family members they hate?’we theorized. This episode of Third Watch, however, centers on just that as Bosco tries to handle a family crisis on what might be the worst Thanksgiving ever. He’s operating on his own, given that Faith has the day off to spend with her family, which is a whole other drama unto itself. An unsupervised Bosco is always potentially hazardous to someone’s health.

It’s obvious from the beginning of the episode that Bosco lacks some social graces. Dispatched to deal with a lost child who allegedly doesn’t speak English, he manages to tick off about four people in the process. He’s never going to be Mr. Congeniality, but that’s part of why he’s the most beloved character in the series. He’s later called to an upscale restaurant where an armed and very ticked off guy named Leonard is tearing into his disapproving family. Within two minutes, we can understand why, as they think it’s a wise idea to disparage the person holding a loaded firearm. This disintegrates very quickly into a hostage situation.

Also on the street, Ty and Sully run into Cutler, a perp they’ve been alerted to at roll call. Of course, Ty does the ‘rookie thing’of having to chase after the guy. Thankfully, he has the stamina for that sort of thing. Most of us (including his partner) are not built like Coby Bell, and would rather just take the car. I can’t even run a mile in ten minutes. Yet Ty pursues the perp into an apartment complex, where he goes inside an apartment and proceeds to shoot at the cops. Ty and Sully finally get inside, but find not one but two guys — so which one was the shooter? Sully insists that it had to be Cutler, while Davis isn’t so sure. Things get hot when a detective (the always-dependable Ruben Santiago-Hudson) starts asking questions. Ty insists that he’s not going to lie and say he saw something he didn’t explicitly witness, while Sully just wants to put away the bad guy.

At the Yokas household, Fred’s already had two glasses of scotch before Faith’s brother and his family have even arrived. It’s not hard to see why as soon as they do arrive: Faith’s well-to-do brother obviously doesn’t approve of Fred and vice versa. Faith not only has to play peacemaker, but she’s doing the cooking. She’s not the only one with a family issue: Bobby is still arguing with his mother over accepting his brother Matty now that his brother has been released from prison. Of course, there’s the now-standard drama between Kim and Jimmy over their son. Family dysfunction seems to be the theme of the episode.

In the restaurant, Bosco’s approach to problem-solving involves telling the egotistical family to shut up (to no avail) and revealing details about his own fractured childhood. It’s not the typical way to do things, but Bosco isn’t at all your typical cop. Plus, he’s in a room with possibly the most stuck-up people in New York, which would grate on anyone’s nerves, especially someone as short-fused as it’s already been established he is. It’s a slow burn this time for Jason Wiles, who isn’t required to give the raging momentum on display in episodes like the pilot and the previous week, ‘Impulse.’He’s set on simmer and he plays it well. ‘I think I can book you all on inciting a riot,’he says with a slightly crazy smirk. ‘I’m not sure, but I think I can.’

Of course, this is right before the waiter gets shot. Nothing snaps people to their senses faster than an accidental shooting. It’s enough to shut up Leonard’s family and scare Leonard into realizing that he’s really dug a deep hole for himself. Bosco is able to convince him to release the hostages — I mean, his sorry excuse for a family, who can’t even be bothered to help the injured waiter out the door until they’re ordered to. It’s a sad statement on family when Leonard’s only request of Bosco is that his family not be allowed to visit him wherever he ends up. He’s willing to face whatever happens to him as long as he doesn’t have to deal with them. Given what we’ve seen of his family, it’s perfectly understandable. With that, he surrenders.

Sully and Ty are still on opposite sides of the fence back at the 55. Sully is upset that Ty didn’t back him up, and Ty won’t tell anything but the truth even if they are partners. What would make things further awkward if Ty knew about it is that Sully is still spending time with his mom. Sully and Maggie Davis actually made a good pair, and I found myself disappointed that they never dated, even if it would have been weird for Ty. The Sully/Ty partnership is just intriguing on so many levels, for all their differences and similarities. I’m particularly impressed with how, although Ty may be a rookie cop, the show doesn’t automatically equate ‘rookie’with ‘stupid’or ‘naÃ¯ve.’This episode is a perfect example of that.

In the end, everything more or less works out: while Faith has clashes with both her brother and Fred, she still loves her husband despite it all. Bosco defuses the hostage situation, albeit not perfectly. Jimmy actually shows up to spend Thanksgiving with Kim and Joey, and Bobby’s brother even puts in an appearance. Even self-centered Carlos goes to the hospital to share the holiday. It’s not one of those holiday episodes where by the end, everyone hugs, makes up and is obnoxiously happy, but it shouldn’t be. Third Watch is not that simple of a show, and life isn’t that simple either. Holidays are a pain in the butt and sometimes family drives you insane, but the message is this: they’re all you’ve got, so make the best of it. (Although I still would never recommend leaving Bosco unsupervised.)

This episode stands out as an example of some of the fundamental reasons I love Third Watch as a writer and critic. I’ve seen a lot of television over the last two-plus decades, and practically every cop show within that span at least once — so for a series, let alone a crime drama, to impress me, it really has to be good. Not that the shows are themselves bad (although I’ve seen a few bad ones), but I’ve become harder to impress because it feels like I’ve seen it all. Third Watch hooked me because it is so refreshingly free of the BS that hinders a lot of shows; granted, it’s from several years ago, so it was a different TV climate, but still it’s nice. The show doesn’t need to have a ‘very special holiday episode’where everything turns out all happy at the end. It relies on a simple theme and strong, sympathetic characterization — on both sides of the coin, not just for our protagonists. Yes, Faith’s brother is a stuck-up snob, but her husband is also a drunk with a bad side of his own. Yes, Leonard probably shouldn’t be holding hostages, but can you blame him? On this show you can see the entire issue from both sides in a three-dimensional world. Nobody’s perfect. In the words of Sean Payton, ‘Perfect is an ideal, and [it] remains one.’

Furthermore, unlike most shows, there’s not a handful of good episodes scattered amongst a sea of forgettable or even bad ones. I love Law & Order as much as anyone, but to be honest, how many of those episodes do you remember when they’re over? A day after? A week after? Third Watch is just consistently good. There are moments in every episode where I can say, ‘I’m glad I saw that,’and I remember it and refer back to it. There doesn’t have to be a big, huge episode. Every one stands out for something, even if it’s just one scene. ‘History of the World’is on my list for a few reasons, not the least of which is that it should remind us all to at least appreciate our family for no other reason than that we’re just as screwed up as they are.