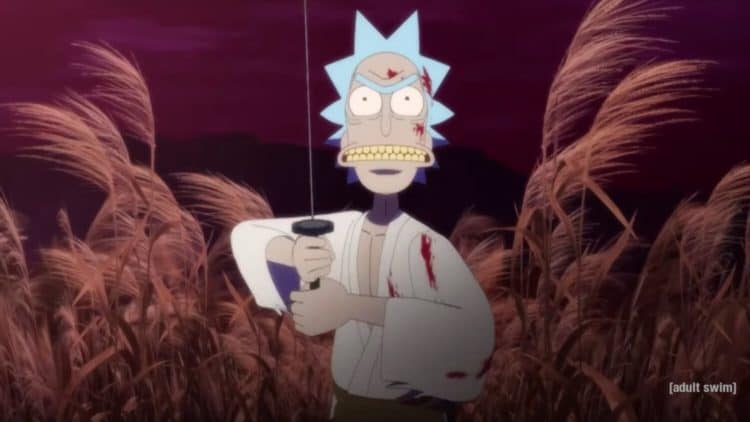 As if Rick and Morty weren’t disturbing enough, giving Rick a weapon and the skills with which to use it only jacked up the disquieting nature of the show to another ridiculous level. Eric Vilas-Boas of the Observer has more to say on this. The feeling of this video is still pretty intense and kind of alluring however since it brings back memories of a lot of older movies and even some of the newer ones where the blood spray is ridiculously large given that the body’s reaction to a wound isn’t to spurt blood in any direction as though it’s being pumped from a fountain. This arterial spray is definitely something that artists and directors love to do at times however since it brings the story over the top in a way that might not have been possible had the wound only bled as it normally would. In this manner it would appear that the human body is just a blood bag that’s already near to bursting and needs to be poked or slashed in order to let forth a jet of crimson that could paint a wall if a body was positioned at the right angle to do so. Plus, the fact that the katana is so overplayed in so many movies is also on display and it’s great since despite the sharpness of such blades, and they are incredibly sharp to be certain if made right and maintained, there is a limit to what they can do with one or two swipes.

But this is the Rick and Morty world, in a sense, and there’s not a lot of limitations here since Rick once turned himself into a pickle, so it’s fair to say that the ceiling is pretty high when it comes to what can and can’t pass as far as these two are concerned. The whirling blades at the bottom of Morty’s conveyance were pretty cool as well since many of us would have loved to see something like this when we were younger, and are still psyched about it when we’re older even if we know the reality of it would be much different. When a person starts to break down just why some things would be possible and others wouldn’t it kind of ruins the whole effect of what’s being presented since it brings people down to reality, where we don’t want to be a lot of times since fantasy is so much more enticing and allows an escape we don’t always get to find in the real world. That might be why Rick and Morty is so popular in the first place since their world isn’t really based on reality, but on the strange and inexplicable ideas and actions that they continually find themselves enacting and getting themselves into.

About the only reason this clip is entertaining for those that aren’t Rick and Morty fans is the fact that it is a samurai showdown and Rick is seriously rocking it as he goes about his business without saying much and just generally kicking ass. It’s very stereotypical to see a lone samurai take on what amounts to a small army of ninjas since the two warrior types have been close to one another for a long time now. The whole idea of who would really win in a fight between a ninja and a samurai is kind of an odd one since it’s like asking which random fighter would win against another random fighter. Ninjas and samurai were often separated by societal class since ninjas were seen as mercenaries and assassins and tended to come from the lower end of society, while samurai were the upper echelon of society and were bred to be warriors. In other words it’s kind of like a knight taking on a street fighter, there are certain advantages to either one, but in a straight up fight the samurai would almost always win, so long as their skill was great enough. In a hit and run scenario however the fight would favor the ninja since their tactics were usually to strike and then fade away, not just stand there and go toe to toe with their opponent. Assassin’s don’t generally get up in the face of the person they’re contracted or sworn to kill, especially a ninja. They would usually take to using every advantage they could in order to bring their opponent down, no matter how unfair anyone said it might be.

In this clip though such a confrontation is meant to show that the ninja usually doesn’t fight fair, but thanks to a lack of formal training said ninja will usually lose out since the samurai were raised to eat, sleep, and breathe warfare among other things back in the day, and they were not to be messed with. Putting Rick and Morty in the mix as a samurai and shogun is just ridiculous, but it was also kind of fun to watch. Connie Liou of the CheatSheet has more to offer on this subject.