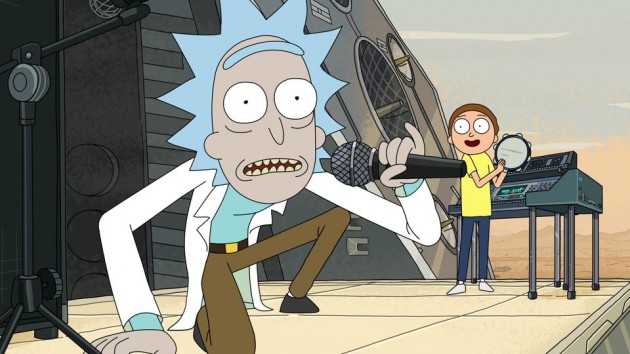 Rick and MortyÂ has been pretty strong so far in its second season, and last week’s episode, “Total Rickall,” quickly became one of my favorites the series has delivered. The episode was a fun and complex play on the famous movie that was executed extremely well. This show never lacks consistency, which is nice, but every week won’t give us an episode as good as “Total Rickall.” This week’s “Get Schwifty” had a simpler plot that reverted to the standard, as Morty gets fed up with Rick and thinks he knows how to fix things only to get in too deep and realize he needs Rick, and the half hour did a great job at keeping things funny.

A giant-headed, alien being appears in the sky on Earth causing the apparent end of the world while repeating the phrase, “Show me what you got.” Rick immediately has a grasp on the whole situation, what this alien is and how it will be fixed. He and Morty travel to the Pentagon to inform the president that they need to create a hit song for the giant head and it will go away. When all famous musicians have been killed (aside from Iced Tea), it’s up to Rick and Morty to deliver the performance and save the world. They play their first song, “Get Schwifty,” which is a new catchphrase from Rick, and it seems to work.

Things don’t exactly go as planned, but when do they ever with Rick? The entire Earth is transported to the planet of the giant heads who are hosting a music reality TV show where planets are destroyed unless they win. From here, the episode hits its fallback stock story forÂ Rick and MortyÂ when Morty gets fed up with Rick’s laziness and steals the portal gun thinking he can save the day on his own.

Morty portal jumps to near death but is luckily saved by Bird Person. He gives Morty the speech about trusting Rick’s decisions and recognizing how much he cares. It’s a nice scene between Morty and Bird Person as we see all of the pictures he has on the wall that reflect the great life moments with Rick. However, it still feels like somewhat of a repetitive scene. I don’t have a problem with these episodes every once in awhile, but throughout its short run so far,Â Rick and MortyÂ has utilizedÂ this story structure a little too much.

Of course, the two of them save the day with another catchy song, and the Earth pops back into place like nothing happened. Both songs in the episode were great, especially “Get Schwifty,” because Rick just strings together a bunch of phrases. I thought the ending to this episode was funny, though, because it almost mocks how often they use this plot concept. Things always seems very high stakes, and then in the blink of an eye, everything is back to normal, thanks to Rick.

The one thing the episode did do very well with was its sub-plot, which focused on Summer, Jerry, and Beth joining the giant head-worshiping cult that is started in town. I thought it was amusing to watch Summer turn into a fully reformed perfect daughter because she was so scared of the giant heads. It was great that they had Beth and Jerry at first be against the new “religion” after watching them tie certain “sinners” to balloons and be lifted away into the sky against their will, only to look past these “ascension festivals” because their daughter respected them now.

Rick and MortyÂ will always deliver laughs in some form each episode. Yes, the show sometimes falls back on this comfortable and overused plot framework a little too much, but that doesn’t mean Harmon and Roiland don’t find ways to cleverly mask it. I definitely think that “Get Schwifty” was the weakest episode of this season so far, but it was still solid. I have no doubts the show will bounce right back next week with something amazing, and I continue to look forward toÂ Rick and MortyÂ each week.

-Â The whole Iced Tea plot was pretty bizarre and maybe a little unfitting, but I thought it was funny.

– I’ll never be sad about getting some Bird Person in an episode.

– Snake Holster on the leg…duh.