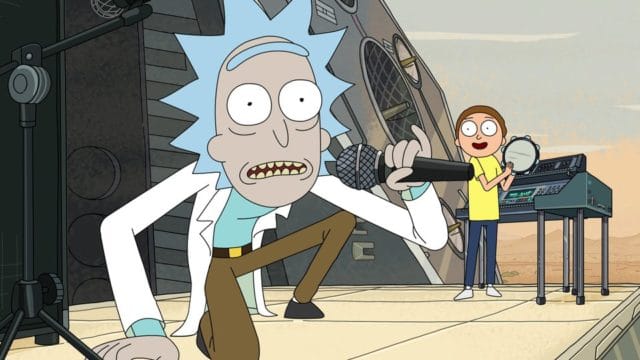 Created for Cartoon Network’s Adult Swim block by Justin Roiland and Dan Harmon, ‘Rick and Morty’. Rick Sanchez is a mad scientist and Morty Smith is his teenage grandson who joins him on his adventures. The duo split their time between normal family life and going on crazy inter-dimensional adventures. Justin Roiland provides the voices for Rick, Morty and several smaller characters. Other talents who provide voices for the show include Sarah Chalke, Spencer Grammer, and Chris Parnell.

Originally, this series began as a short parody film based on ‘Back to the Future’. This was called ‘The Real Animated Adventures of Doc and Mharti’. The film was created by Roiland and shown at a film festival that was co-founded by Harmon. Adult Swim was looking for new ideas for television shows and approached Harmon who recommended that he and Roiland worked together to create a series from this short film. The first episode was aired on December 2, 2013, and it has since become one of the most popular animated series on television.

So, what makes ‘Rick and Morty’ the best sci-fi series?

The characters in this sci-fi program are unique in many ways. Rick is inspired by traditional sci-fi characters such as the doctor from ‘Back to the Future’ and Dr. Who. However, Rick is a cynical alcoholic making him much different to the typical main characters in other television series. The fact that Morty is a teenage boy also makes this show different as the sidekick in other shows I often much older, with the exception of the movie ‘Back to the Future’. The relationship between Rick and Morty also differs to typical examples of science-fiction programs as they are a grandfather and his grandson who enjoy spending time together.

Viewers Can Relate to the Characters

While the storylines are beyond the realms of belief, the characters have cleverly been created in such a way that viewers can relate to them and really care. The creators have taken care with the character development throughout the different seasons of the show so that viewers can connect. In addition to Rick and Morty, the other main characters include Summer, Beth, and Jerry.

Non-animated science-fiction series are restricted by the constraints of budgets, sets, special effects, and many other factors. The characters and storylines they can have are all impacted upon by these different elements. As ‘Rick and Morty’ is an animated series, these constraints are not an issue, so Roiland and Harmon can create whatever freaky characters and bizarre scenarios that their imaginations are capable of to their heart’s content.

The show is about so much more than the misadventures of ‘Rick and Morty’ as the other characters include their family members. The family faces dilemmas that have real consequences and this adds extra depth to each episode.

The fun element is something that makes this animated television series stand out from other shows in this genre. While many science-fiction programs are serious, ‘Rick and Morty’ is funny and entertaining. This comedy factor is what makes ‘Rick and Morty’ appeal to a wide audience beyond those who are fans of sci-fi programs.

Each episode is about a new and exciting adventure and it is these storylines that keep viewers coming back for more each week. As previously mentioned, the creators face fewer restrictions than those who are making non-animated sci-fi series so the adventures are often outrageous and may take place throughout the multiverse.

These are just some of the reasons why ‘Rick and Morty’ is such a great show and stands out from other sci-fi series. It will appeal to not only fans of sci-fi, but also to those who enjoy animations and those who want something fun to watch with elements of comedy.