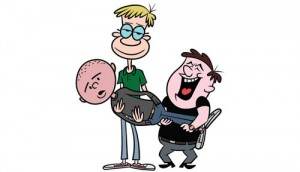 The Ricky Gervais Show was most certainly HBO’s most riotous new series of 2010, and in my opinion was the funniest show of the year. The half-hour animated comedy has a simple premise: it’s an animated podcast. Of course, the fun of it comes with the content of the podcast, which centers around Ricky Gervais and Stephen Merchant (both of whom created and produced the shows The Office and Extras) talking to their friend Karl Pilkington. That sounds like a boring premise until you take into account that Karl is absolutely off-his-rocker insane.

Gervais and Merchant just act as catalysts and commentators to Pilkington’s insane ramblings, which grow nuttier and nuttier with each episode. In one episode, Pilkington straight-facedly describes U.S.-weaponized dolphins that were dispersed into the Atlantic ocean by Hurricane Katrina.

Thankfully, HBO renewed the series for a second season. You’ll be able to pick up the first season on DVD on January 4 (look for my review of the set soon), which is just in time for the show’s second season. That season will take up a Friday timeslot on HBO on January 14, and will air for thirteen episodes. According to Examiner: “Topics covered in season two include:Â  21st-century scientific innovations, bizarre medical stories, Ricky’s pet project to ‘Get Karl Famous’ and Karl’s fascination with doppelgangers and twins, as well as the regular features ‘Monkey News’ and readings from Karl’s diary.”

I can’t wait to hear more idiocy from Karl. Trust me, it’s worth tuning in.