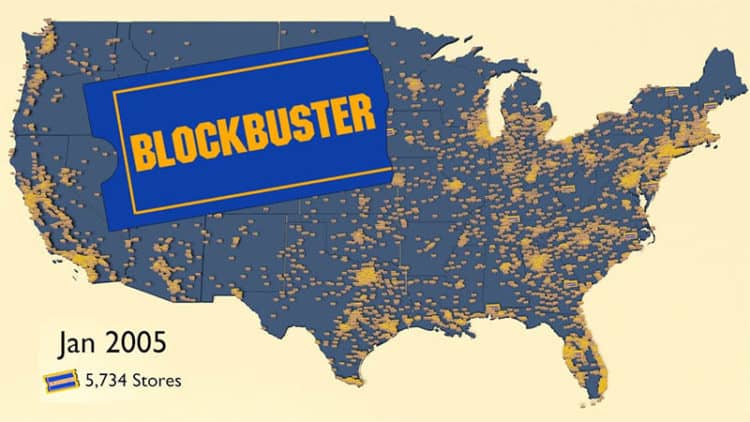 There’s no doubt about it, Blockbuster Video used to be a humongous force in America when it came to video rental and in the 80s they started to boom in a big way that a lot of people might have been surprised by since it meant a change to their way of life when it came to home entertainment. Obviously when VHS tapes were still really big they were more expensive, they were more prevalent, and they incurred a bigger cost when it came to turning them in on time, and turned them rewound since that alone incurred another cost. The ‘Be Kind, Rewind’ slogan wasn’t just lip service since a lot of movie stores had the device that could rewind a movie without having to put it in the VCR. But Blockbuster was definitely king even though there were plenty others such as Hollywood and a few other lesser-known video chains around the country that were either more locally known or had a smaller following. At one point mom and pop shops were looking as though they might have to lower their prices or go out of business, but in certain areas of the country they were still doing just fine since Blockbuster tended to do more business in areas where there were more people and as a result more profit to be made. Rural areas might have had one within reach but they weren’t as essential as mom and pop rental stores were seen to be just as reliable if not more so because they were also far more personal.

But living in the city near a Blockbuster meant there was never an excuse to have a dull night unless you were flat broke and couldn’t afford to rent a movie. Of course when big movie stores started requiring people to sign up for their cards so they could rent it became kind of a hassle, but it was still one that a lot of people were willing to go through in order to have the best entertainment at their fingertips. A lot of us can probably remember those days, walking the aisles, looking for new releases, or looking for older movies that we wanted to watch, smelling popcorn cooking in the distance, our feet scuffing the already heavily worn floors that so many people had walked before us. That was the movie store experience, during a rainy day or just a fun night in with friends or family. But obviously that wasn’t meant to last since after the advent of DVD’s and then streaming the Blockbuster experience started taking a serious decline as sales went down, customers stopped coming back, and stores had to start closing due to lack of revenue. I wouldn’t say they were dark times unless one was working for the store at that time, but it was definitely a rough time to be in the movie rental business.

With well over 5,000 stores throughout the country at one point, Blockbuster was a company that was hard to touch since they had a firm grip on the movie rental business that didn’t feel as though it would ever waver. But lo and behold as technology started to speed up their hold started to slip as one store after another had to close and their influence continued to dip and wane as across the country people saw the blue and gold signs come down and empty buildings lay dormant until someone could come along and do something with them. Anyone ever see one of the many buildings that Blockbuster occupied back in the day? Those that stayed empty for a while looked pretty forlorn and saddening, though some of them did manage to be utilized for other businesses fairly quickly, while others took a while to be refitted and renovated into something useful. Heck, I’ve seen one that became a bottle drop location for people bringing in plastic bottles and aluminum cans. If anyone would have mentioned such a thing was going to happen fifteen years ago it’s likely that people would have laughed since Blockbuster was still at a high point in their reign.

The speed with which Blockbuster went out of business was amazing in a kind of depressing sort of way since it took a while for them to build up. But even more amazing is that there’s still one left and it’s holding on strong as it can in order to avoid going out. Even during the pandemic it’s been staying open in order to serve the people of the community and remind them of the once proud titan that Blockbuster used to be. At one point we might be talking about movie stores in history books, but as of now they’re a fond memory of many people as a holdover from our younger days.