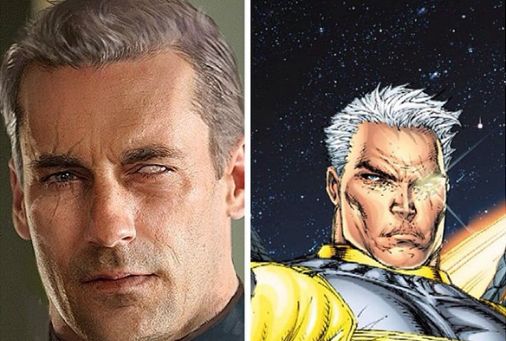 Jon Hamm has played many roles in his incredibly successful career.Â  From Liz Lemon’s love interest on 30 Rock to his most famous TV role as Don Draper on Mad Men, Hamm’s TV resume is quite strong.Â  And it’s not like the guy can’t act in movies.Â  From comedies to drama, the guy can play just about any role.Â Â Â  So much so that he recently got the attention of comic book character guru Rob Liefeld.Â  Liefeld tweeted that the actor is his “Dream Future Cable Pick”

This would be the first time that Hamm would play a comic book character. However, rumor has it that Cable is considered a strong contender for Deadpool 2 as director Tim Miller has said he’d be “run out of town on a rail” if Cable isn’t in the sequel.

No one is certain that Hamm would be up for the role but considering Hamm’s willingness to be part of some serious comic relief, we wouldn’t be surprised if he took the challenge. After all, anyone that does this can play any role imaginable.

Article first mentioned on The Wrap