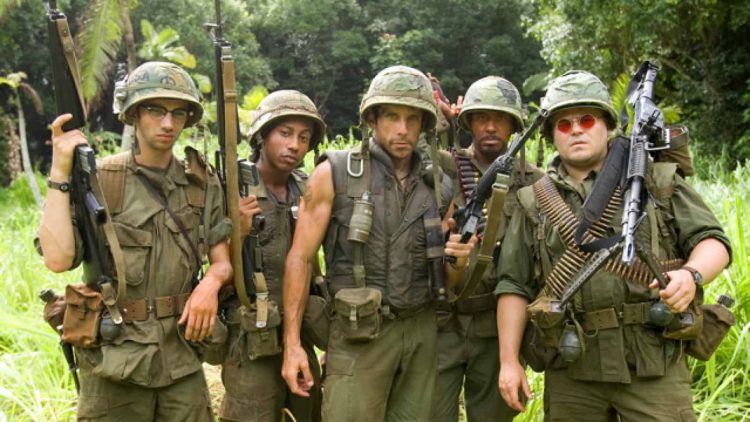 First, without trying to offend Josh Heath of We Got This Covered or anyone that happens to think along the same lines: GET OVER YOURSELVES. When Tropic Thunder came out the use of blackface by Robert Downey Jr. might have shocked people a bit but guess what, they still laughed at it and yes, WHITE guys might still have it in their movie collection if they’re still rocking DVD’s since, I mean ugh (imagine sarcasm bottled and released) DVD’s are like so, 2000s and junk, right? Anyway, getting past the sarcastic and eye-rolling remarks, it’s likely that blackface in this case was not the greatest idea but then the same people laughing at it that are backing up now and saying ‘whoa, dude that’s not okay’ really need to evaluate what they were thinking back then as opposed to now. There was no one getting the face of the general public and waving a finger about ‘cultural appropriation’ was there? Back when Tropic Thunder came out it was kind of a dumb movie but people still laughed at it, didn’t they? Why is that? Oh, right, because it was satire and not meant to be taken seriously. It featured a white man playing an egotistical white actor that believed that he could play the part of a black man better than, well, a black man. The part of Lincoln Osiris was supposed to be over the top and out of control, as that was a part of the movie that, despite being controversial, was meant to show just how egotistical Kirk Lazarus really was as a character. RDJ even had this to say in response to people trying to blast the movie for this very reason:

“I think having a moral psychology is job one. Sometimes, you just gotta go, ‘Yeah I effed up.’ In my defense, Tropic Thunder is about how wrong [blackface] is, so I take exception. My mother was horrified…I thought, ‘Hold on, dude. Get real here. Where is your heart? My heart is, A: I get to be black for a summer in my mind, so there’s something in it for me. The other thing is I get to hold up to nature the insane, self-involved hypocrisy of artists and what they think they’re allowed to do on occasion.”

So it doesn’t make the most sense in the world and it might raise a few eyebrows, but it does go to show that RDJ wasn’t backing off when it came to the role and that he still had it in mind that it was PARODY, not a stab at reality but a chance to show the ridiculousness of it all. How many people flew off the hook when White Chicks came out? None? How many people of color have taken on role that were predominantly white largely because they were either written in that way in the source material, or because they were based on characters that came from parts of the world where many people were actually white? Did anyone care? Not really because the people picked to play the roles were great and, unfortunately, because calling out anything but whitewashing these days is bound to get someone labeled as a racist that doesn’t want to see people of color succeed. Lisa Waugh of Ranker makes a pretty good point with her article that kind of backs up my main point. The hypocrisy is that the moment the script is flipped and people resort to blackface again we’re bombarded with the negative history that blackface represents in an attempt to shame the hell out of any that would dare attempt such a thing, while people of color can perform the same action by taking on whiteface and nothing will happen. The parody of it isn’t even taken into account since being white in show business means an individual has to walk a moral tightrope and say just the right things and perform their roles in just the right way, or they’re bound to be labeled as a problematic individual since they’re obviously so culturally insensitive.

IT’S A PARODY. The more that this is stated and the more that people can come to believe it the better since having to defend a movie that’s come and gone and been labeled as funny by so many is one of the many things that’s still wrong in show business considering that people have been looking back on the past instead of focusing on the future. Why is that really? Could it be because the present and the future aren’t as laced with controversy as the past appears to be? That doesn’t sound even remotely true, but what is true is that picking at the past to try and create a different narrative than what’s already been seen is becoming a trend that’s not only increasingly annoying, but is bound to come back and haunt those that aren’t paying close enough attention to where the discussion is bound to lead them in the present. Zack Sharf of IndieWire has more to say on this matter.