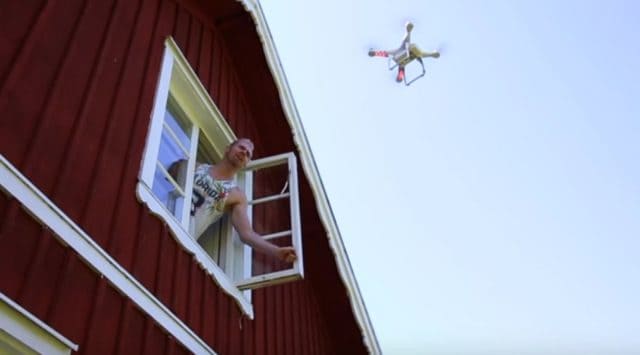 When people have nothing else to do some crazy stuff can happen. Such as a drone being sentenced to death by a rocket-powered katana. Now I don’t know about you, but that sounds fairly medieval and even cruel even for a piece of machinery. The title is a little misleading since the drone is more or less in hover mode than it is in mid-flight. Without splitting too many hairs though it’s a little impressive that the blade manages to go halfway through the drone before hitting the battery case and essentially just pushing the drone the rest of the way.

These guys seem genuinely shocked that a katana could in fact cut anything like drone almost in half. If you look back into historical texts a finely-made katana could cut through one to two bodies without stopping and would make it look like a thing of ease. A small drone and its innards wouldn’t pose much of a problem to a battle-ready blade. Considering however that this blade is probably more modernized in form it might not have the same durability and edge as those blades of old.

You can tell at the end when one of the guys states that you can see a chip in the blade, however minute, where it connected with the battery case, which was the hardest part of the drone. A battle-ready katana would have most likely sliced through the drone, it’s case, and left both halves flying to the sides rather than pushing it back into the haystack. It’s still fairly impressive that the blade sliced cleanly through half of the drone, but from that point the thing just kind of came apart.

I really think this video could have done without the goofy, dramatic scene at the beginning simply because it doesn’t add a whole lot. This is basically curiosity for the sake of curiosity and while that’s great and a lot of fun it doesn’t always need embellishment. Just wondering what would happen if you tried to slice a drone in half with a katana should be enough really. It’s one of those many burning questions that guys simply have to know the answer to in order to feel that they have handle on something. Right?

Now getting onto the dynamics of this whole thing. A rocket-powered katana seems like a bad idea at first simply because it’s a blade that’s been known for cutting people open and you’re giving it the kind of boost that could increase its momentum and thereby its killing power exponentially. A regular knife couldn’t do this by any means, but a katana is not a regular knife. It’s an elegant and deadly blade that was designed with a single purpose in mind, and that was to cut apart anything in its path. And you want to give it a boost with a rocket engine.

Somebody was really bored to come up with this one.

At the very least it’s on its own track and is being aimed at a haystack that it couldn’t possibly hurt. But acting surprised at how far it’s buried tells me that these guys don’t know enough about what they’re doing, and that’s disturbing.