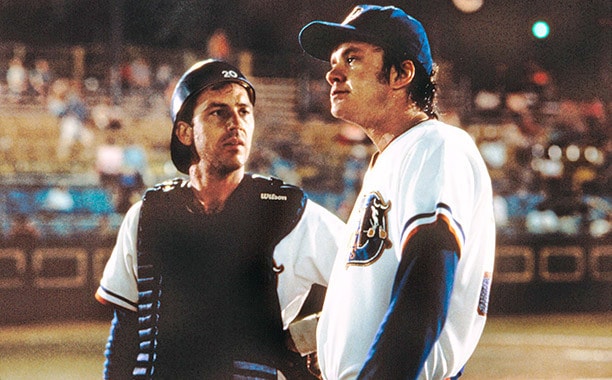 Often times it takes a director that’s actually been in the position of their actors to really understand the dynamics and what is needed to make the scenes work. Ron Shelton is that kind of man since he played a lot of baseball in the minors as a much younger man. He knows the struggle of getting on that bus and driving for miles to the next game and getting paid almost nothing to play the sport he loves. That’s what makes him such a great director when it comes to making sports movies. Plus, have you seen the man’s credits? He knows how to make a sports film, without question.

Here are just a few of the films he’s directed in his career.

Most of us should remember this film. It was the type of baseball that you remember playing as a kid but at very different level. The drama, the feuding between players, and the up and down feel of being cut or being promoted is something that Shelton does better than most others. Once you take a look at his minor league background you can better understand where he’s come from as a director. Plus, he knew just how to put just enough comedy into the movie to make it entertaining on all levels.

One of the next greats on his resume, Shelton did this film in 1992 and it was a big hit for a little while. It’s fame faded off, but in recent years it’s still been a favorite of many. The manner in which he attacked several different stereotypes when it came to basketball was masterful and witty all at the same time. Woody Harrelson and Wesley Snipes seemed perfectly matched on screen as they went back and forth with their witty banter and hard-hitting styles of play.

Only two years later Shelton came back with Blue Chips, a very rough look at college basketball that showed a very different side of the game. The payoffs, the corruption, and the attempt of a coach to turn around a losing season were all poignant reminders what the game has actually become at certain levels and just how it affects the coaches and the athletes. This film gained a good deal of notoriety but also caused a divide between those that felt that it showcased the real problem in college sports and those that believed it was nothing but hype.

Another two years went by before Shelton tapped one of his former actors, Kevin Costner, to take up the kind of role that Costner seems to excel in. As a semi-retired golf pro, Costner’s character is eventually convinced to compete for a tournament spot and does so in hilarious fashion by using a bag full of yard tools to play with. The movie is more about the determination to make one last good run before fading away than anything, and it comes off as a touching and even charming movie.

Ron Shelton simply knows what he’s doing when it comes to sports movies. Every detail, every nuance, every scene is so perfect that you can’t help but watch it again just out of sheer enjoyment.