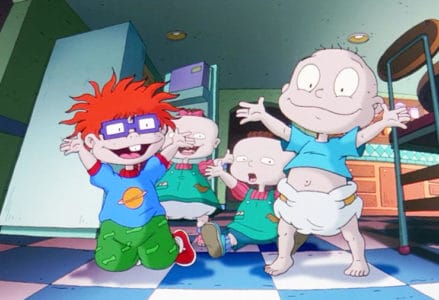 As Jeremy Dick of TVWeb puts it there’s no exact date yet for the upcoming Rugrats revival on Nickelodeon but fall does appear to be when the desired release will come about, even if that feels a little ambitious with everything that’s going on. To be realistic about this even bringing the Rugrats back feels ambitious since despite their overall popularity and how much a lot of people still remember and care about them there’s really only so long a show can last until someone’s going to say “shouldn’t they be getting older by now?”. If you’re about to state that The Simpsons, Family Guy, and a few other shows should be headed the right way then you’re right, as it’s a sign that people can’t let go of their favorites and feel the need to hold onto them as much as possible. TV execs are all too happy to oblige in such a situation since to be fair they’re doing what’s best for business and if people keep watching and keep wanting more from their favorite franchises then in the minds of those in charge it’s best to keep the party going. Common sense and practicality don’t have a lot of pull when it comes to some shows, especially given that taking them off the air tends to provoke the fans more than any studio would want to risk doing.

Nancy Cartwright, who’s a talented voice actress with more than one role under her belt, will reportedly be taking on the role of Chuckie again, though it’s not clear just who will be voicing the other parts within the series. Likely as not however those in charge of casting will find someone for each role that will offer up a seamless transition that will keep the fun going and appease the fans with their childish tones so as to give people what they’re wanting. Given how long the show was on to begin and how many adventures and misadventures the kids experienced though the content is going to be interesting to watch since the writers are no doubt going to be kept busy trying to find new ways to present the youngsters while keeping it within the boundaries that have defined the show for so long. After all it’s not quite like the Muppet Babies where imagination tends to take hold sometimes and defies common belief, as Rugrats has stayed pretty well grounded throughout its run when compared to many other cartoons.

At one point it also gained a reputation among some folks for being kind of disturbing in a few ways since the grandfather was seen as something of a perverted old man while it was deduced that the parents really didn’t pay that much attention to their kids. A lot of it can be chalked up to the artists getting away with a bit of adult humor here and there while the rest of it might just be the product of the times and something that people have grown used to while others might have been a little too hyper-sensitive when it came to noticing said aspects. But overall Rugrats has been a cartoon that many people can remember fondly and might enjoy seeing back on the air considering that it was rather successful during its time and gained a good number of fans. How it’s going to top itself is anyone’s guess but at this point all that can really be said is that the show is coming back, though whether it will be as popular as it was or will lose a step here and there will have to wait to be seen. It is after all one of the shows that a lot of people have carried with them to adulthood for one reason or another and one among the many that somehow kept its integrity throughout a couple of different spinoffs and movies. Bringing it back now however does continue to affirm the idea that creativity and innovation might not be dead, but both are taking a huge hit since the reboot/remake/sequel era is still in full swing and doesn’t show any signs of waning within the next year or so.

In fact it might be safe to say that once the pandemic is over and done with that we’ll still be seeing this era roll out for a while since while there are new ideas that have been pushed they’re still not topping the charts as much as one might like, since reboots are somehow still favored by so many. This might sound kind of odd and it is to be certain, but the tried and true formulas that studios have used for years appear to be what people want at this point, while the new and creative ideas are still being seen to falter. Rugrats is by far not a new idea, so it’s hopeful that it will find a waiting audience when it returns.