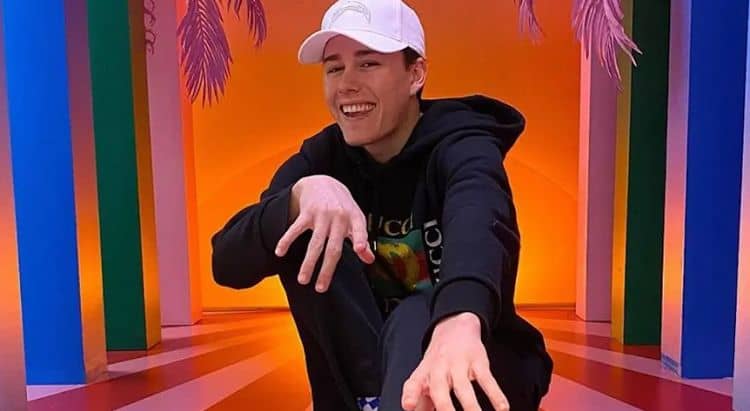 If you’ve spent some time on TikTok over the last few months, there’s a good chance you’ve come across at least one of Ryland Storms’ videos. The 20-year-old influencer has become a superstar on TikTok and he currently has over 3 million followers. He is also a part of the TikTok clique, Hype House. He has a fun personality and is best-known for making lip sync videos and comedic collaborations with other influencers. While it’s clear that his content is centered around him having a good time with his friends, it’s something that really resonates with lots of people. Keep reading for 10 things you didn’t know about Ryland Storms.

1. He Didn’t Join TikTok With The Intention Of Getting Famous

When Ryland started posting on TikTok, it was initially just a joke. He didn’t have any plans on going viral on the platform. In fact, he actually thought TikTokers were kind of lame. However, his content eventually began to take off and it was clear that he was on to something.

TikTok may be the hottest new social media platform on the scene, but YouTube has proven to be tried and true. Many TikTokers have started making YouTube channels so they can share longer videos. Ryland joined YouTube in 2010, but he didn’t post a video until 2020. Even though he only has one video at the moment, that video has more than 1 million views and his channel has 157,000 subscribers.

Long gone are the days when influencers use their social media platforms like their personal diaries. Although there are still some people who do that, a lot of the younger influencers simply use their platforms to post singing and dancing videos. Ryland is among them. He doesn’t share much personal information online and he likes to keep all of his content on target with his brand.

After George Floyd was murdered at the end of May 2020, the Black Lives Matter movement gained a lot of renewed attention. People all over the world were tragically reminded of the realities of racism and police brutality. Many began using their platforms to help spread awareness and share resources with those who were looking to help. Ryland added a link to “Ways You Can Help” in his Instagram bio.

Ryland’s very first Instagram post which dates back to July 2016, is a video of him performing a skateboard trick. Although skating is the focal point of his current content, he is still an avid skater who enjoys trying new tricks with his friends.

A lot of young people consider Twitter to be ‘washed up’ in comparison to platforms like Instagram and TikTok. However, Ryland is very active on Twitter. He currently has 336,000 followers and posts tweets on a regular basis. Most of his tweets appear to be random thoughts that don’t always make sense, but his followers love them anyway.

Selling merchandise has become a popular way for influencers to earn some extra cash will also establishing their brand. Ryland doesn’t have any merch at the moment, but it looks like he’s thinking about moving in that direction. In May, he sent out a tweet asking if he “should drop merch”. The responses were overwhelmingly yes, so it wouldn’t be surprising if he decided to give the people what they want.

8. He And Nick Austin Were Friends Before TikTok

Lots of things on social media are superficial, but that isn’t the case with Nick Austin and Ryland Storms’ friendship. Recently, Ryland tweeted, “I met nick at a bonfire in 8th grade he had no where to stay so i said stay with me he didn’t leave my house for a week tht was like 5 years ago we have basically lived together since we have accomplished so much in the past year it’s insane from ditching class to first class hbd.”

9. He’s All About Good Vibes

We all know that social media can be a dark place. If you’ve ever read the comments under a celebrity’s post, you’ve seen just how cruel people can be. But this isn’t something Ryland likes to feed in to. Instead, he prefers to use his platform to spread positivity and good vibes.

10. He Loves To Live In The Moment

Ryland is enjoying all of the social media success so far. When you’re in his position, it can be easy to get caught up in trying to think about your next move. However, he’s not really thinking too far ahead. He is the type of person who enjoys living in the moment and taking each day as it comes.