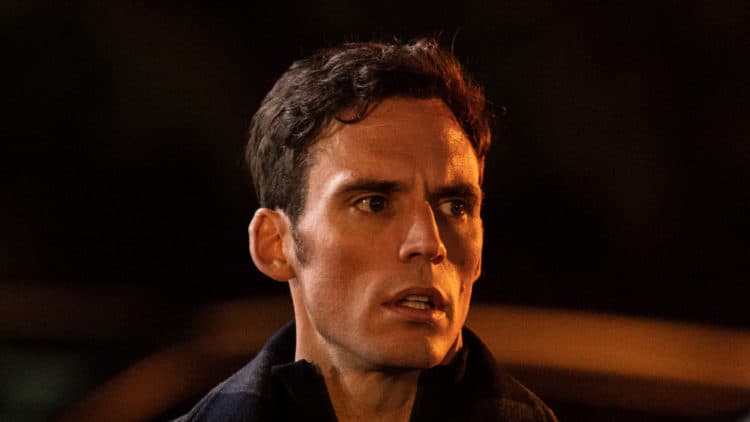 Some might think that it takes a truly deviant mind to play the part of a villain, but if that were the case then Sam Claflin might not be any good at playing decent characters, or maybe he would. In any case, the fact that like many actors he pretends to be someone else so often, which is the main part of the job, after all, is why he’s so good at what he does. Some might want to argue that many people that try to act in such a manner have a rather poor time of it, but then one has to remember that not every actor is equal to another since some have the natural skills to make a role work and others are able to take their time and experience in the business and apply it in a manner that’s almost scary it’s so good. In the movie Every Breath You Take, Sam plays the role of a man named James whose sister commits suicide after speaking to her psychiatrist, played by Casey Affleck. When the psychiatrist sees how vulnerable James is he decides to go against his better judgment and accept James into his home to meet his wife and daughter, perhaps in the hope that an apparently steady family will help to center the other man. Unfortunately, all this does is gives James the opportunity to destroy the psychiatrist’s life as he begins to seduce the man’s wife and daughter.

Stating that Claflin is playing the perfect part of a psychopath is an understatement really since if one thinks about it, he’s played the role of a protagonist in the past and done quite well, but he’s also played an antagonist as well as in the show Peaky Blinders he played the part of Oswald Mosley, a man that the Peaky Blinders don’t trust and actually try to assassinate at one point, even though the attempt goes awry. Sam is no stranger to the part of the bad guy, but his dedication to the role is something that one can’t help but wonder about since tapping into one’s darker half is something that a few people might scoff at since actors are playing at being the bad guy and can apparently turn it on and off when they need to. But playing someone that can destroy a family from within without any compunction about what they’re doing and with what might be cold and calculating precision, is kind of creepy.

Sam isn’t the only one that can do this obviously, but learning that he has the clout and the ability to pull is bound to win him a good bit of regard in show business simply because while being able to act despicable on camera isn’t real, it’s still impressive since a lot of people don’t believe that they could be even half as ruthless or as conniving and cunning as someone like James, or Mosley, as a lot of folks don’t think they have it in them. The truth is that everyone does have the capability to do this, no matter how far down it might be buried in their person. Every single individual has at least one mean bone in their body and if pressed they can become unbearably cruel, especially when given time to practice and hone the ability. For actors, it has to be a little tough to turn this off at times since it’s something they have to keep as a skill as well as a part of themselves, meaning it’s a tool that never really gets tossed in the back of the garage to collect dust and become forgotten. Some might want to argue that point since once a person no longer brings that type of character to bear it might be a little more difficult to find it, but it’s bound to be there all the same. The fact that Sam has shown that he can do this isn’t difficult since his turn as Mosley made it clear that he can act like a despicable human being, and the fact that it’s an act is reassuring since he does sound like a very interesting guy.

But that darkness that resides in every person is difficult if not impossible to get rid of entirely since without that hint of darkness, that ability to become the bad guy, human beings wouldn’t be complete and they certainly wouldn’t be fully functional. This is one thing that many people don’t want to agree with but can’t escape, that even if one is only acting the part of the antagonist, the fact is that this part of them does exist, and if it was ever made real it would be kind of scary. But as far as the act goes, Sam has effectively wowed a lot of people, which is to his continued benefit.