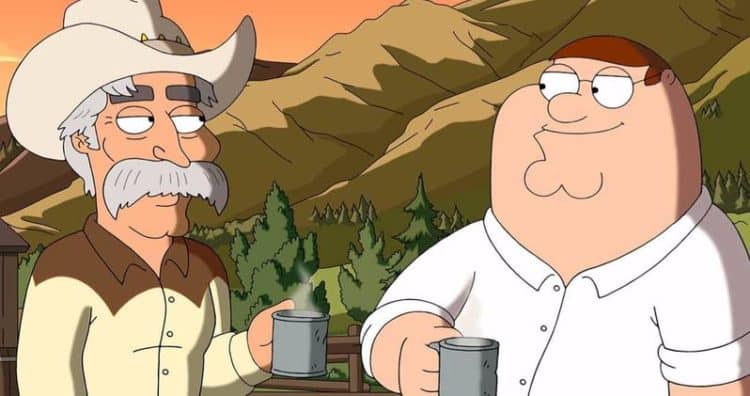 The last thing that anyone ever thought might happen in Family Guy is that a western cowboy might take over a mayor, meaning that there’s still a chance to surprise people now and then, and it would appear that the show is taking it since Sam Elliott will be coming to Quahog as the next mayor, who’s name is Wild Wild West. No joke, apparently the mayor is the late mayor Adam West’s cousin and was recruited by Peter when the patriarch of the Griffin clan decided that no other candidates were worthy of the position. This is kind of a big switch though since it will be bringing a taste of the west to the east since Sam Elliott has been largely known for being the cowboy type that’s appeared in many movies and on the Netflix show The Ranch as a grizzled old rancher that’s just plain ornery and doesn’t get along with many people. How his character is going to react on Family Guy is bound to be interesting since he’ll no doubt be a stark contrast to Adam West, who was a part of Family Guy for quite a while until his passing. Sam Elliott is likely going to be a worthy replacement, but the differences in character are going to be easy to notice no doubt, especially since trying to get Sam to play a somewhat brainless character might not fly as well.

Adam West was, well, he was a great actor and the part he played in Family Guy was amusing since the mayor of Quahog was more or less kind of a fool that had somehow manage to keep his position one way or another since the people of Quahog are more or less morons that continue to elect a mayor that would roll around in toxic waste trying to gain superpowers and often said things that made people stare in wonder since they didn’t know how else to respond. It’s going to be interesting to see how Elliott will play this role, or how he’ll be directed to play this role since it’s hard to see him as a foolish character given how often he’s been seen as a very serious individual, even when he was allowed to be a little more loose and playful. He’s simply come off as the kind of guy that’s going to be the laidback kind of person that will get serious in a heartbeat when it’s needed and will somehow still remain calm while he’s doing it. Seeing him as anything other than that is kind of difficult, but seeing him being funny while he’s in character is easy.

It does feel as though Family Guy might change his character a bit, or he might change the show, or it could be that both will end up happening since his involvement could mean that things are bound to change anyway since the show has been on the air so long anyway that it might need to be altered just enough to keep the fans happy and show them something new that they weren’t expecting. Just bringing him onto the show is a development that a lot of people likely didn’t see coming since while it’s true that the show has employed several serious actors and celebrities over time, a lot of them have either been extremely temporary, as in one or two episodes, and several others have been known to employ comedy in their acts through the years. Sam Elliott has proven that he can be funny, but his bass voice and serious demeanor just don’t appear to endear him to a show such as Family Guy, if only because it just doesn’t appear to fit as well as Adam West did. There’s not much doubt that his presence on the show will be able to give people another reason to laugh, but it will probably be in a much different manner than Adam West was able to do since like it or not, Adam and Sam are two very different people. I know, not much of a revelation, is it?

With how much the show has changed over the years it’s not too much of a surprise that someone new would be brought in, but again, the idea of bringing in someone like Sam Elliott is still kind of a hard fit to make when it comes to the overall feel of Family Guy. But if there’s any justice in the world, and there is, don’t doubt that then this should work out just fine. A feel of the west in the east might be kind of interesting since Wild Wild West is bound to be kind of a kick, and he could be a fine addition to the show that people didn’t realize was missing.