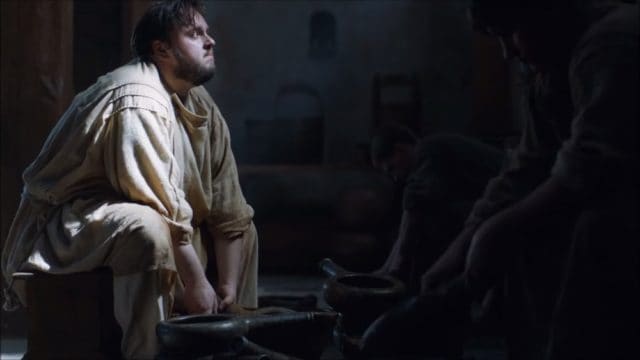 Samwell has been put through a lot during his tenure in Game of Thrones. To start with he’s not much liked by his father, who sent him to the Wall rather than look at him any longer. There’s a different reason but it’s along the same lines. He was tormented when he got the Wall because he’s not a fighter, as if that was a surprise. In fact the only reason he survived at all was because of Jon Snow and his sense of fairness that kept Sam from being continually brutalized.

After that, he was sent into the wilds as part of the group of Crows that were eventually slaughtered. He somehow escaped and, unbeknownst to anyone else, faced down a white walker with a shard of obsidian that destroyed the beast. Upon making this discovery Sam eventually made his way back to the Wall and eventually left. He and Gilly then make their way towards Oldtown. Eventually Sam makes his way towards the Citadel to become a maester, but is now, as of this season, learning that the hard lessons he must endure are not all centered around books and the acquisition of knowledge.

The knowledge of how to clean a bedpan and serve his superiors is something he might have learned in a few days, but apparently it takes far longer. On one end it is the self-sacrifice and willingness to take orders and assist others, acts of selflessness that Sam has to learn, though he has already proven many times over that he knows very well how to serve others. On the other end he is dedicated to the pursuit of knowledge and is willing to endure anything it would seem to reach his goal. Many people would have tired of bedpan duty in a matter of two or three days and been quit of the job without fail.

Samwell has been doing it now for some time and despite the fact that his gag reflex has yet to go away, if it ever will, he is still seen stoically scrubbing out the vile pans as he seeks to endure one day after another. From carting books around to emptying, scrubbing, and collecting bed pans one would almost think that man might go mad with the sheer boredom of it all. But somehow those men that have become maesters in their own time endured the same things, and have turned out better for it if you asked them.

Somehow I don’t think Samwell is meant for that life. He has too much of a passion to learn to be stifled any longer with the meaningless charade of emptying bedpans and ladling soup into bowls. He should be reading the books he’s handed, not relegated to simply collecting them and then putting them away one by one. Sam isn’t much of a warrior, that was established early on and hasn’t changed. But he is by far and large not suited to the role of nursemaid or book tender either.

It remains to be seen however just how far the maesters will push this man to his limit before something finally breaks.