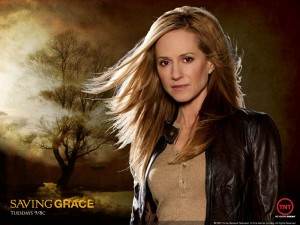 After three years on the air, TNT’s Saving Grace ended last night in an episode that I’d define as mostly good but open to a bit of interpretation from the fans. Saving Grace was a complicated television drama that followed Grace Hanadarko, a police officer in Oklahoma City, who had a dark side that included heavy drinking, smoking, and plenty of recreational sex. But despite these and other flaws the character was well loved and had a good heart. The series opened three years ago with last-chance angel Earl (portrayed flawlessly by Leon Rippy) asking Grace if she was ready to give her life to God. Last night’s finale came full circle and answered that question. (Warning – spoilers on the finale after this point. Read with caution).

In the past, the series has typically had very strong episodes, and their timing throughout each season has been perfect. However, during this final season, specifically these last three episodes, it seemed rushed and a bit disjointed. For me, it impacts the finale a bit, and lowers the high standard the show has set before this point.

The finale did successfully wrap up the character of Grace Hanadarko, though maybe not as fully as some would have liked. The series always covered the sometimes thin lines between good and evil, worldiness and spirituality, and despite being given a Last-chance angel, Grace resisted giving up her bad habits. The finale followed Grace’s battle with an evil being in Baltimore, but in order to destroy it she gave the ultimate sacrifice. As the rubble was cleared away and Grace’s lifeless body was removed in a body bag, her friends and survivors stood and saluted her actions. Even her angel, Earl, stood amongst the crowd and saluted, leaving many to wonder why he wasn’t guiding her to heaven. But it would seem, to me at least, that the meaning in her death is that Grace was finally able to take that extra step. And just as Earl asked her 3 years ago in the first episode, yes, she was ready to give her life to God. However, for many it seems that for a show about saving Grace (it is in the title after all) they forgot to actually save Grace! The moments after her death in the finale focused primarily on her friends and family and how they reacted to and dealt with her death. So the question remains, did Grace make it to heaven, and is she truly happy for once? As it stands now, the writers intended for each of us to make those decisions on our own. So like it or not, it’s for you to decide. For me, I have to believe that since Grace obviously wasn’t saved physically, that she was finally saved spiritually, and like it or not, it was good television.

What was your opinion of the Saving Grace finale? Do you think Grace ended on a high note, going full circle, or have the writers let you down? Were you upset, like me, that there wasn’t any resolution given to Earl’s involvement in Grace’s sister’s death, many years ago? Let us know in the comments below.