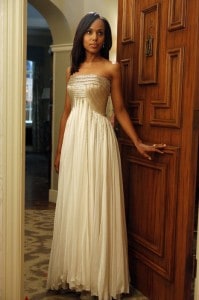 Are you still screaming, crying, running around your house like someone putting a fresh perm in their head after that slapper of an ending for tonight’s Scandal? If so, I won’t throw shade your way, because that was just a completely insane episode of the increasingly addictive Shonda Rhimes drama that will have fans attempting to shut Twitter down until next week’s episode.

In light of the tres crazy events of tonight’s episode, I’m going to stick to the main three “What. The. HELL?!?” moments before capping off with a quick list of some other developments in the episode, because the Abby and Harrison Scandal of the Week arc was like a misplaced accessory on an otherwise stellar ensemble of the conspiracy surrounding President Grant’s election. So let’s start with the one story that I didn’t see coming at all…

While Harrison, Abby, and Huck were working on the scandal of the week, Quinn decided that this would be the perfect time to suss out who was behind her frame-up/kidnapping. Why, Quinn? Why?!?!

I’m still trying to see where, when and who triggered Quinn to go on this quest towards her self-destruction. Yes, I use self-destruction, because that’s exactly what our amatuer Nancy Drew will face once her search explodes in her face worse than an Acme bomb on a classic Looney Tunes short. So what could have possibly prompted Quinn to go commando, and where the hell could she have gotten all the breadcrumbs (and balls) to confront Huck with her accusations? This is one insubordination Olivia Pope probably can’t shut down…

James, Meet This Bullseye You Just Put On Your Back…

I respect the journalist’s quest to sniff out the truth by any means necessary, but discovering that the Â current White House administration (whom your husband is a part of) rigged the Presidential election that in turn is also connected to a domestic terrorist attack does not call for a desire forÂ posthumous Pulitzer Prize for Public Service. In short, James Bean, my man, you are no Bob Woodward, so stop why you are way ahead of yourself.

I literally cringed when David Rosen passed off his notes to James, because it was like watching the other Mr. Bean get infected with a chemical agent that comes with a death sentence to anyone exposed to it. Abby is now “cured” thanks to some ‘shadery’ by Olivia Pope, but James is literally sleeping with the enemy and a co-progenitor of the scandal that will surely get him killed if he even breathes a word of his findings to anyone. I wonder if James even suspects Cyrus of being involved in the unethical conduct that can either make James career or effectively end his life immediately. If the other Mr. Bean does know, then will his love for Cyrus be enough to keep him quiet?

Finally, we arrive at the moment that sent my dinner all over my floor as President Grant, after coming to terms with Olivia moving on with Senator Davis, was shot walking towards his 50th birthday celebration. 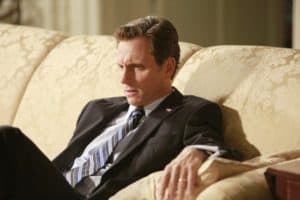 Talk about a chaotic mess that literally lasted only one minute, but has already caused a frenzy among Scandal fans across the board. The truly messed up thing about the scene? Mellie knew. She knew something was about to happen and it wasn’t any intuition of the sort, which begs the question whether if someone either in the White House or the Power Circler she belongs to had a clue as well. Either way, the First Lady is looking more suspect thanÂ the baby’s paternity that she’s carrying.

Other Scandalous Moments of the Night

– Huck’s love for reality TV. Who knew? My brow actually went up with Abby’s and Quinn’s when the resident spy admitted to his love of trashy reality TV.

– The whole IPO storyline seemed like it was a combination of the latest Facebook IPO debacle and some other business related story that I can’t recall at the moment. I was more interested in Abby and Harrison’s interactions through that particular arc, which solidified my goal to be just like Harrison one day.

– Olivia and Edison looked very cozy tonight… and I didn’t like it. Sue me, but I was not cool with Edison getting super comfortable with Ms. Pope, despite him obviously being a great man and politician. Plus, am I the only dude who wanted to find Fitz a punching bag while he was looking at those surveillance photos of Olivia and Edison? That man was in pain, y’all. Pain!

– Hollis Doyle has to be behind President Fitz’s shooting. Has to be.

-Â Twitter is already abuzz with the #WhoShotFitz hashtags and while it might not reach pop cultural status like Â Dallas’s groundbreaking ‘Who Shot J.R.?’ phenomenon, it still is a perfect homage that, unfortunately, came at an eerie time since J.R. Ewing himself, Larry Hagman, passed away this past weekend.

What are your thoughts and theories on Scandal this week?! Do you need therapy as well?