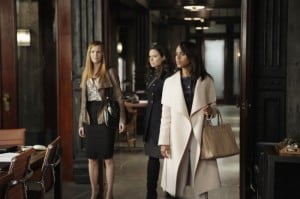 I felt like Tony Montana after ingesting a mound of cocaine once the credits of Scandal hit the screen. And I’m high as hell.

If that analogy isn’t good enough, how about I seriously felt like going 20 rounds with Joe Frazier, Mike Tyson, Muhammed Ali, and Sugar Ray Leonard all knocking my block all over the ring after watching Scandal. My brain is scrambled after being blown all over the damn place. I was three knocks from putting a hole in my roof and my dog was literally sitting in the corner shaking in fear after my massive freak out during the last five minutes. In short, if this is the lead in to next week’s explosive finale of Scandal, then we are not ready, Gladiators. We are not ready.

And Your Mole Is…

Billy (freaking) Chambers?!?!? I have to admit that I did not hearing one peep from him since he resigned from his office as the Vice-President’s Chief of Staff and was last seen in the same elevator with Billy Chambers. Billy is a true case of ‘Out of Sight, Out of Mind’ that really came back to bite Olivia Pope & Associates and The Grant Administration (as well as the viewers) in the ass tonight.

With that said, the real double slap came when we found out David was the true culprit and was never “a part of the team” to begin with. Admittedly, my heart sunk a little after realizing David Rosen shafted Olivia and her associate big time by working with Billy Chambers and Charlie to steal the Defiance memory card. Now with all the Defiance info at their disposal, there’s no telling how this unholy trinity will use Â it to bring down The Grant Administration. David has been on the revenge tip from day one and waited for the right moment to strike. In hindsight, David constantly stating he was on the team sounded very suspect the second time around. The question now is when did David fall to the dark side? Was it before or after the dead girl ended up in his bed? See, while I was willing to accept him into the OPA fold last week, my open arms have been closed shut and the former U.S. Attorney can go kick rocks somewhere, because that’s just Â crazy.

Also, could Charlie meeting up with Billy in the elevator at the end of Season One have been the beginning of this epic take down? It makes you want to go back and rewatch Scandal from the beginning.

Fitz Had An Ultimate Goal All Along and Olivia Was His Catalyst (Maybe?)

Last week, I was very reserved about the ridiculously hot Olitz reunion in the sense that it pretty much was too perfect of a reunion for there to be two episodes left of the season. Plus, I like the dynamic of the Olivia/Fitz/Mellie triangle and the presidential aspect of the show. There is no greater DC scandal than from behind the White House walls, IMHO. So, I was in the minority with that assessment, but thankfully Shonda Rhimes pulled a serious Hell Mary with this relationship by restoring some of the tragedy within the Olitz relationship and not wrapping it up in a nice big bow.

Seeing Fitz and Olivia being lovey dovey and carefree was all hunky dory, but you could practically sense the hell waiting for them around the corner. Said ‘hell’ turned out to be Fitz never filing the proper paper work to run for re-election, revealing he was going to step down whether he was going to be with Olivia or not. It also revealed how Fitz was still reserved about never being good enough to be President of the United States, which Olivia felt that she owed him after Defiance. The stinger during the debacle was Cyrus assuming Olivia had to give up her relationship with Fitz in order for him to clinch his re-election. Boy, was Cy far off base about that conjecture…

Mellie, Mellie, Mellie. When will you learn, ma’am? While Olivia was begging Fitz to let her be the fixer in the marriage scandal, the (possible) former First Lady called her own crisis management specialist in guest star John Barrowman, who was basically the male version of Olivia Pope sans the baggage of a staff. 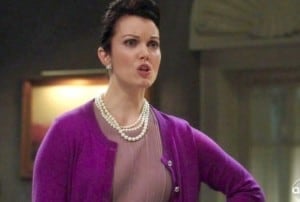 He read Mellie like a throwaway flyer on the community board and she couldn’t say much afterwards. Male Olivia Pope also made it pretty clear why Mellie wasn’t upping Olivia’s identity to the world just yet, and in the grand scheme of things First Lady Macbeth doesn’t want to give up her lifestyle,nor her husband, just yet. And the sad part about her story arc at this point is that she is still naÃ¯ve as hell when it comes to Fitz’s feelings, despite the man blatantly letting her know where his heart belongs now. If Mellie hasn’t grasped that Fitz is dead ass serious about being with Olivia tonight, then she will most definitely get the wake up call next week.

While dealing with a PR nightmare, the cold as ice Chief of Staff had to deal with James’s naivetÃ© and a President who just doesn’t give a damn anymore. With James, I called it last week that there was no way in hell James got that job on his own and that Mellie was behind it all. However, it was a bit crushing to see Cyrus come down on his husband for being so gullible. I bet those suits don’t sound too hot now do they, James? As for the way Cyrus handled the situation, I don’t know. It was rough as rough could get. You don’t ever want to hear your spouse call you “stupid” and “naive” in under one breath, especially when your career is involved. But someone had to point it out to James that he was simply a pawn in Mellie’s overarching plan. With that established, will James still go hard to prove Cyrus wrong or will he use his new position to come for Mellie for making him look like a fool?

As for Fitz, it is beyond amazing Cyrus hasn’t had a heart attack at this point, because working for this particular President seems to be bad for your physical and mental health. Although, Cy managed to come out on top in the end (for now), his struggle to keep up his political career was the example of a man at his wit’s end with no help in the world. Now as for me giving a damn? A whole different story, because whether he was going to kill Olivia last week, the fact that he would even try to throw her under the bus literally or figuratively was enough for me to put my guard up against one of my favorite characters of the show. For now.

The B316 Remnants: Why Are They In The Picture Again?

This whole plot confused the hell out of me, because I don’t know what their purpose is anymore. The Head of the “Who is the Mole?” Mission seemed as if he was willing to throw Jake to the wolves to make sure Olivia and Fitz stayed away from each other. Why? What is the significance for Olitz to have no contact with each other and, furthermore, how can this type of organization exist and the President not have a clue of it? Plus, what does Cyrus have to do with it? 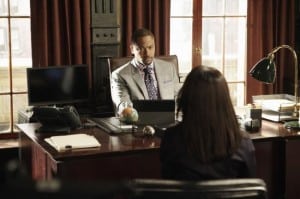 – Huck planning to put down Charlie would have been some sort of awesome, but it wouldn’t have solved anything with Huck’s family. Also, thank God for Quinn talking our resident assassin off the ledge on murdering Charlie in cold blood.

– We need a back story on Harrison and we need one now. No, I’m not talking about “Olivia saved my life and now I’m a ride or die dude.” I’m talking about a serious character study on why Harrison is so loyal and protective of Olivia, which if you ask me will never be as tight as Olivia and Huck’s connection. If I could see why Harrison is so emotional and damn near overprotective of Olivia, then maybe I can let up on him demanding answers when they are not warranted.

– I would be hella surprised if Abby and David maintains even a footsie relationship after last night’s betrayal, even if Abby made the first double-cross move.

How did David meet up with Billy Chambers? Will Defiance be the real roadblock for the Grant Administration in the upcoming re-election? Will the real Defiance memory card show Fitz as the real winner of the election, which will restore his faith in himself as President? Will Mellie retract her statement about the affair (doubt it)? Does Sally Langston have anything to do with Billy’s schemes? Will OPA figure out that David screwed them over big time? Will Jake realize he’s expendable? Can we get John Barrowman as a permanent cast member?

It’s been 5+ hours since the credits rolled for Scandal this week and I’m still trying to make sense of it all. What did you guys think about the episode? I know that I’m not ready for next week’s finale at all.

One more to go, Gladiators!