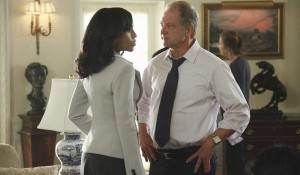 My apologies for a delayed post but Shonda Rhimes did a number on me last Thursday, how about you all? After an intense Grey’s Anatomy, we relocated to Washington DC to kick off Scandal.

After last week’s intensely wild ride that ended in the near fatal stabbing of journalist Gideon, we picked up right where we left off. Unfortunately that “near fatal” part became fatal when Quinn made one of the most classically idiotic mistakes and pulled the sharp object out of Gideon’s neck. I’m not even close to a doctor and even I know that when you pull out the object, the person is likely to bleed it. I’m pretty sure this is a well known fact, no?

What led to the stabbing as we know, is that Gideon was the little journalist who could and he finally cracked the Amanda Tanner case. Billy Chambers was sleeping with Amanda Tanner and the baby was his. When she wanted out, someone came in and took her out, thus silencing her forever. Gideon assumed it’s Billy and last week so did the audience.

It seemed like the case was cracked and this week was a lot about picking up the pieces and dealing with Billy’s rant to the press and accusations about the president. However, there was one big piece of Amanda’s puzzle that we didn’t solve until the end of this finale. It turns out that Cyrus also paid Charlie to kill Amanda. It’s unclear at this time if Cyrus and Billy were working together or if Cyrus just panicked and wanted Amanda dead in order to protect Fitz. My bet is on the later. 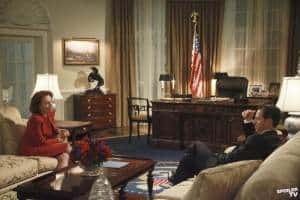 My total MVP of the week was Mellie Grant. She has balls of steel. Not only did she know about Olivia and Fitz’s affair, but she condoned it as long as Olivia did her part in running Fitz’s life and keeping him happy. It was almost like sister wife agreement. Mellie swooped in to do damage control and confronted things with an honesty that was borderline psychotic but entirely captivating.

The finale left us with one huge question on our minds. Who is Quinn Perkins? Why couldn’t she call the police? Why couldn’t she let David run her prints? Obviously she is on the run or has some sort of new identity. Any bets? What did you all think of the season finale of Scandal? Can’t wait for season 2!!!