Home
Scandal
Scandal Season Two Finale Review: The White Hats Are Back On… And Dirtier Than Ever 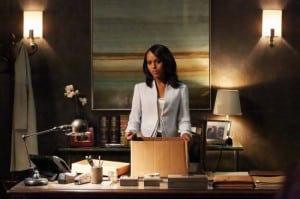 Before I begin, I would like to have a moment of silence for my soul, which Shonda Rhimes and Scandal snatched clean out of my body last night with that insanely, drop dead finale that will easily change the way people will say “Dad?” all summer long. While my sanity (and in some respects, my dignity) went out the window when Olivia Pope, the newly labeled ‘Presidential homewrecker,’ revealed that the head of B613 was in fact dear ole dad, Rowan Pope, it took a second viewing of the episode to see the cracks within the overall narrative. Small cracks, but cracks nonetheless. Before we get to those ugly, blemishes in what was otherwise an excellent episode, let’s celebrate the “WTF?!”/”OMG!?” moments which made most of us react by fainting, screaming, or jumping out of windows to deal with that cliffhanger.

1) Olivia’s Dad is the Mastermind Behind Mission: Olitz Takedown

But the question now comes down to one word: “Why?” Why would Rowan Pope send someone to shoot (or either shoot to scare) his daughter? Why would Rowan leak information onÂ his daughter being the President’s mistress? Rowan clearly has an agenda and it will be one long ass summer trying to figure out Olivia’s role is in the grand scheme of things. Is it a personal vendetta against Fitz, or is Roman simply taking the role of “overprotective father” to inifinity?

This man… Cyrus’s actions tonight had me on several levels of highs and lows. I seriously felt that I needed to be admitted into the hospital myself after Jeff Perry served what was basically his Emmy reels in damn near every scene he was in. But it was his personal double takedown on Olitz that will haunt me for the rest of the summer, because seeing Olivia’s face crumple in pained horror when Beast Cyrus dropped the grenade of Verna’s death being at the hands of Fitz was enough to make a grown man cry. Fitz was eventually going to find out about Olivia and Jake sooner than later, but Cyrus using Verna’s death to crush Olivia’s “lovey-doveys” for Fitz was like an Evander Holyfield K.O. to the heart, body and soul. Mr. Beene was seriously not playing last night, which was evident in both powerful speeches he recited to the two love birds when they clearly weren’t thinking straight.

Was Cyrus wrong for what he did? Oh, most definitely. But it was necessary. If anything, Beast Cyrus was right about one thing in his epic monologue, they (Olivia, Fitz, Mellie, Cyrus, OPA, etc) are not living in a romance novel destined for happy endings. Seriously, if anyone truly thought Olivia and Fitz was going to simply waltz into the sunset together then sorry for you. No matter how foolproof Olivia’s plan sounded, it wasn’t going to work, and Cyrus had to show them the light. I might be in the minority about that, 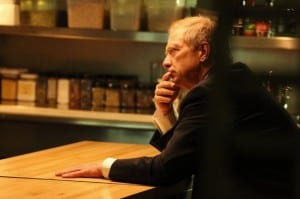 but it is what it is. Now with that said, Cyrus going in on Sally Langston and his ambulance scene simply slayed me. Someone please give Jeff Perry his Emmy nod like now?

Okay, David Rosen got all of his cred back and then some, with a side of much more respect after what he pulled last night. However, I can’t help but ask why the hell did he steal back the Cytron card in the first place? What was he going to do with it? Or did Billy Chambers have him steal the card in the first place after all? Either way, I’m praying that David giving Olivia the tape and that bad ass White Hat is a symbol that they can move on and leave their sordid pasts behind them, because I really want David to keep his job as a U.S. Attorney this time around and still be a Gladiator in a Suit while doing so.

Man, Quinn had her first taste of blood, which officially commenced her journey down a dark path and an even jucier storyline for next season. Her plunging that drill saw into Billy’s thigh seemed to release the cork that sealed the former Lindsay Dwyer’s pent-up rage of having her life stolen from her. But will Huck be able to reset the seal and save his friend’s soul before it’s too late? Talk about a nice twist to the growing bond that is Huckleberry Quinn, which will prove to be simultaneously thrilling and nerve-wracking this fall.

For disobeying orders, Jake was thrown in the same hole Huck had to endure in the Scandal episode “752,” which means we won’t be seeing this guy for a while. With that said, I have to salute the man for going to the extra lengths to make sure Liv was safe, despite not getting the girl in the end. So, Captain Jake Ballard, you are a true American hero in our eyes, and we salute you!

Let me say this: Olivia and Fitz were way too happy in these last few episodes. Way too happy. This means Shonda Rhimes was waiting patientlyÂ in the wings to shade the hell out of all the fans by snatching away that happiness and exchanging it for a whole world of misery to last about two more seasons at most.

I knew going into this finale that Fitz or Olivia would not be holding hands like love struck idiots when the credits rolled. I knew that either Olivia and Jake’s sex tape would make it to Fitz’s desk (it did) or that Mellie was going to dropÂ another bombshell that would delay the happy union for another season or two. With that said, I’d be damned if a small part of me wasn’t hoping that I would be all types of wrong in my assessment.

But fret not, gladiators. Olitz will eventually have their time in the sun together. Just not at this particular moment.

Now, let’s move on to the part that pains me to bring up… 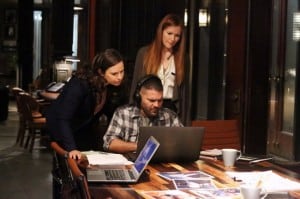 1) Harrison Was Unusually Quiet Throughout the Night

The biggest mouthpiece of Olivia Pope & Associates (other than Liv herself) didn’t utter or do much last night, which rubbed me the wrong way for some strange reason. Usually, I’m very skeptical about Harrison, who has yet to really bear his soul with the audience in my eyes, but last night I wanted him to actually do something, say anything instead of simply reacting to the action going on around him. For a minute, I felt Harrison was being quiet because he might had a hand in David Rosen taking the Cytron card, but that obviously didn’t turn out to be the case. So what gives?

Plus, while the cast was promoting the show in the past few weeks, Columbus Short was in attendance at all, nor was his name been brought up the hosts or even his fellow cast mates. Betsy Beers did mention in a recent episode of the official Scandal podcast (released every Friday after a new episode airs) how Short was not feeling well and couldn’t do the podcast for that week, but damn can someone through poor Harrison a bone? Especially after he Hulked up and threw that chair last week…?

2) The Dangling Chads Known as Governor Reston and Charlie

After Olivia had her meeting with Governor Reston, the man simply wasn’t brought up again for the rest of the episode. I found it odd for OPA and the Grant Administration to not check in on this man, who obviously still has a vendetta against Fitz and had a smoking gun to blow his opponent away for good, especially after Billy Chambers came back to bite them in the ass. Plus, at this rate Charlie is a rat on the run with several targetsÂ on his back, but with the information the former B613 agent has on OPA, the White House, and even B613 themselves, it would imperative for someone to bump off the pastry lover for good.

3) How Did Cyrus Not Know Rowan Pope Was Olivia’s Father?

With Olivia and Cyrus’s close history with each other, how did Cyrus not know who Rowan Pope was? I’m sure some family pictures or something were exchanged, or a poignant tale about how Dad either wasn’t there or wasn’t there enough was discussed between Liv and Cy. Something? Anything? Personally, this is one of the questions that must be answered in the first episode of Season Three, because it’s nagging me.

I think it can go without saying that this will be one hell of a summer for us Scandal fans. Until this fall, Gladiators!