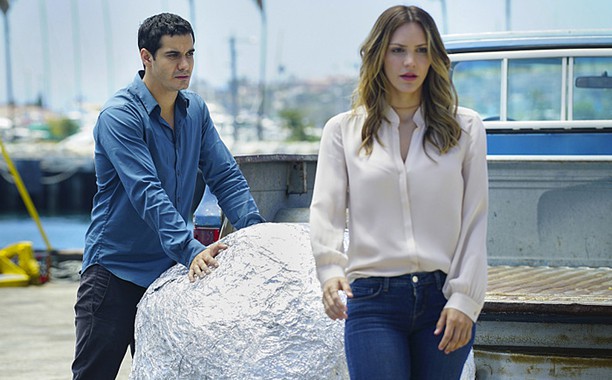 “The United States right nowÂ is a nation without defense.” Oh, poop. Scorpion sure knows how to start a new season. With a deafening bang. Literally.

Two F-130 fighter jets are flying out of control over Los Angeles. The jet that Lieutenant Commander Woodrow is flying launched a missile. Then the missile hit the plane that her wingman was flying blowing his jet into bits. To make matters worse, the hackers have taken control of every military vessel in the U.S. Not. Good. Team Scorpion, do something!

Meanwhile, Walter arrived at Tahoe just as Tim kissed Paige. I had possible scenarios in my mind for the big reveal/confession, and this was one of them. I feel sorry for Walter, but Agent Gallo was right. If Walter were to begin a relationship with Paige when he’s not ready to fully commit, then the genius would end up losing the woman he loves. I agreed with the Homeland agent when he told Walter that when it comes to matters of the heart, he’s way smarter than him.

There’s also some serious tension regarding Toby and Happy. The behaviorist tried getting Happy to tell him who she’s married to, but the mechanical prodigy didn’t answer. Toby, she said that she would fix it and you two can get back together somewhere down the line, but give her the space to do it! I’m also intrigued when Happy was whispering to Walter about deleting her marriage records. So Walter knows about Happy’s husband, intriguing. Good thing it’s not crazy, borderline insane Mark Collins, so that’s a huge sigh of relief.

The scene where Walter tried to tell Paige how he feels about her was not exactly the right timing. You don’t spill your heart out when you’re facing life and death situations. At least the two made it out of the white shoe office in time before the missile hit. Can’t say the same for Toby’s car as it burst into flames. It also turns out that Walter was the one who changed the hotel reservations and the shut down of the hotel’s restaurant. Walter, I get that you love Paige and hate seeing her with Tim, but sabotagingÂ her like that is just wrong.

When Tim heard Walter’s confession of love for Paige over the comms, he wanted to punch the living daylights out of the genius. Agent Gallo calmed his protege down, saying that Walter’s just being Walter. Way to put the fire out before it could burn, Agent Gallo. I am also amazed at Toby’s profiling skills. He easily deduced that the hackers are from Eastern Europe and that they are a group of teenage boys wanting to prove themselves. If Scorpion doesn’t work out, he can always go work at the BAU over at Criminal Minds. Metaphorical mic drop indeed.

In the end, the hackers were caught, the military vessels were saved, and no one else had to die. My heart went out to Toby when he took back his marriage proposal to Happy as he swept up the confetti. I hope that he can work things out between him and Happy. The same with Walter and Paige. If I can’t have both real-life Waige, which saddens me greatly, then at least give me TV Waige.Â I also enjoyed seeing Sylvester take charge at the end of the second episode. The human calculator made a speech about how everyone is not getting along as they should. His words seemed to have gotten through to the rest of Team Scorpion, but an emotional thing like this takes time to get better.

Team Scorpion saves the world once again in this two-hour explosive season three premiere of Scorpion.