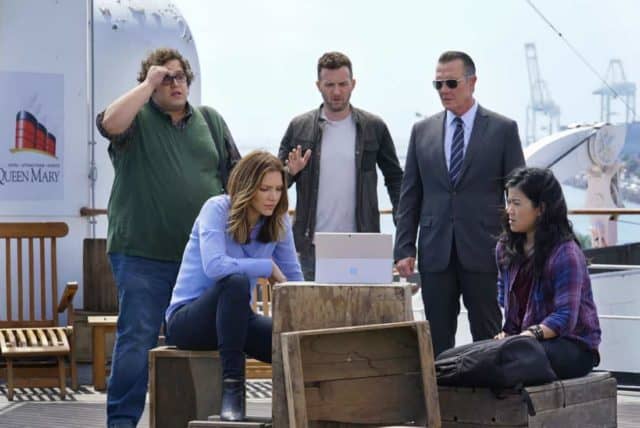 When there’s something strange in your neighborhood. Who are you going to call? Ghostbusters!Â The show should have played this iconic song in this week’s episode of Scorpion. Why? We’re going after ghosts, that’s why! Well, technically there’s no such thing as ghosts, but the person that enlisted Scorpions’ help this week believes in the supernatural.

The mission, aside from ghost hunting, is to stop a wayward ship carrying toxic and explosive liquid natural gas. It’s initially heading to a port at Long Beach. The problem is, the vessel is remotely controlled, and due to the electric magnetic field that affected the antenna on the Queen Mary, not one piece of technology onboard the tanker is responding. As Scooby-Doo would say: Ruh-roh.

I liked the whole ghost theme of this week’s episode. It gives off thatÂ sense of cold fear and panic that comes with Halloween. Dave provided some comedic relief, but there were moments in the show that irked me. He went on and on about how the various spirits of the sailors that worked on the ship are lurking about the Queen Mary. Team Scorpion then debunked his theories and science ended up saving the day. On top of that, the ghost that they saw on the screen turned out to be the guy responsible for the ship’s operations. However, watching the team react to what appeared to be a ghostly encounter was surprising. Even Toby freaked out enough to grab Happy’s hand.

It’s also surprising to see Walter take a backseat to this week’s mission for a good part of the hour. His comments about debunking the fact that ghosts do not exist made me nod in agreement and roll my eyes at the same time. It makes sense, yes, but that’s like being a rude smart person and pointing out the obvious to an average person.

Speaking of Walter, it was rather rude of him to listen to a lecture on his phone during a performance. Paige’s friend Amy has a new song, and the latter is debuting it at a local pub. Paige enjoyed the song, and it seemed like Walter is too until the cat came out of the bag. Walter tried to apologize for it later in the episode, though he managed to make things worse and angered Paige even more. Good job, O’Brien. Way to screw-up the screw-up.

I applaud Paige for using her music knowledge to help stop the gas tanker from colliding with the refinery at Long Beach. The liaison may not be a genius, but she knows certain things better than that of the other geniuses. I’m glad that she’s getting a chance to shine intellectually. Maybe she should do that more often?

I’m also glad that Agent Gallo is talking about his feelings about the charges being laid against him. That and his fears with regards to the upcoming trial. Hopefully, Dr. Curtis can get to the bottom of it and make the Homeland agent feel less stressed for lack of a better word.

Toby and Happy’s Halloween costumes are very creative. They both did a play on words like sad sack and ceiling fan. Sylvester went as the Devil’s Advocate since he’s a lawyer now. I’m not sure if Lucifer would appreciate the horns, but hey, it’s only a costume.

Ralph’s attempt at playing to Patty’s subconscious by going to the Halloween party on time? Good luck!

Kudos to Sylvester for using his jury profiling skills to figure out who to borrow a speedboat from. Very Dr. Jason Bull of you, Sly! HeÂ and Dr. Phil would be proud!

The part where Agent Gallo practically threw Walter out of the motorboat and onto the tanker? Brilliant! Sometimes, when it all comes down to it, there’s just no time for math.

Oh, I’m sure that the lady sang “Wolfman” instead of “Wolfmen” in the song at the beginning of the episode.

Walter ordering a beginner’s guitar kit at the end? So sweet! It would be awesome to hear him play it sometime!

Someone call the Ghostbusters! Team Scorpion are chasing ghosts as Walter learns to appreciate music in this week’s Halloween-themed episode of Scorpion.