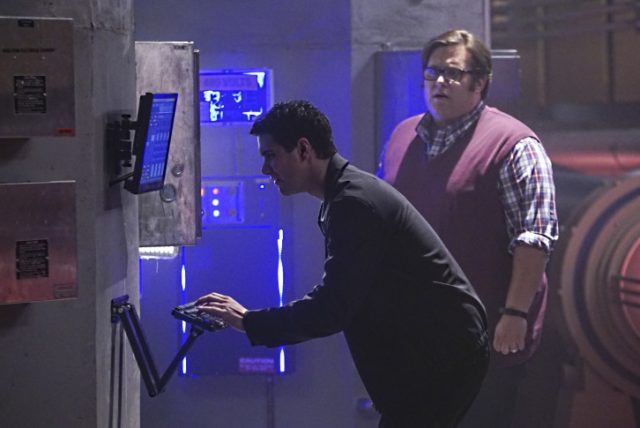 I envy geniuses. I do. The way that they can figure things out at a rapid pace astounds me. Though what would happen if a genius were to become an average person with average intelligence? That’s what we will find out on this week’s episode of Scorpion as the team heads down to an underground particle accelerator lab called PANDS (Particle Accelerator Neutrino Detection Station) in the Rocky Mountains.

It was amusing, to say the very least, to watch the geniuses act normal for a change. I felt terrible that they’re losing their natural intelligence, but I enjoyed seeing them be like the rest of us instead of their smart selves. I chuckled when Walter went in the wrong direction to the supply closet to retrieve the hand saw. Oh, how I will miss you, dopey Walter. I feel your pain, Paige!

Meanwhile, Ralph hangs out with Florence as they attend a chemistry conference. The young genius did his wingman duties and pointed out all of Sylvester’s qualities as smoothly as possible. I was surprised that the chemist didn’t become suspicious of Ralph’s behavior. Maybe she is starting to harbor feelings for the human calculator?

Back to the mission, the team managed to verify the lab’s WIMP (Weakly Interacting Massive Particle) discovery. The downside is, one of the prairie dogs got out and chewed on the cables that connect to the hydrogen tank. If they don’t do something to repair it, then they will die a fiery death. To think I thought prairie dogs are cute. The mischievous creatures. On second thought, they’re still cute.

The role reversal for Team Scorpion is similar to what happened on this week’s Lucifer. While refreshing and new, it’s still nice to return to routine and have everything go back to the way it was. Besides, if Walter, Happy, Toby and Sylvester were to retain their average intelligence levels, then the whole premise of the show would be pointless.

In the end, the team used the Argon to cool down the particle accelerator, thus stopping the creation of the black hole that will swallow up our entire solar system. Major kudos to Paige for suggesting they shrink wrap Toby’s head to help him regain consciousness and his IQ. The ending scene with Walter working on his electric feedback mechanism is interesting. These two are very much alike seeing as how Florence immediately understood Walter’s drawing on the blackboard. I know that Waige will be alright since the chemist is interested in Sylvester, but I still can’t help but feel worried.

The part where Paige and Agent Gallo were naming celebrities with food in their names was fun while it lasted. The Homeland agent ended up falling asleep from all the boredom. Shame they don’t have wi-fi access underground. Could have surfed the Internet for a few hours.

Sylvester rapping instead of wrapping plastic wrap around Toby’s head. Sly, it’s wrap, not rap! Although I have to say, the genius has skills.

Walter is not skilled in playing Pictionary. I swear he and Sheldon Cooper would get along great.

The scene where Happy wanted a no-look high five before Toby fainted. Hysterical.

Toby finally agrees to consult a doctor who did not go to a more Ivy League-ranked university so he could get help with curing his inability to father children.

The IQ levels of the geniuses of Team Scorpion are impaired while trying to prevent the creation of a black hole in an underground lab in the Rockies. Paige simplifies the science for them while Florence and Sylvester grow closer when she helps him with a special project in this week’s Scorpion.