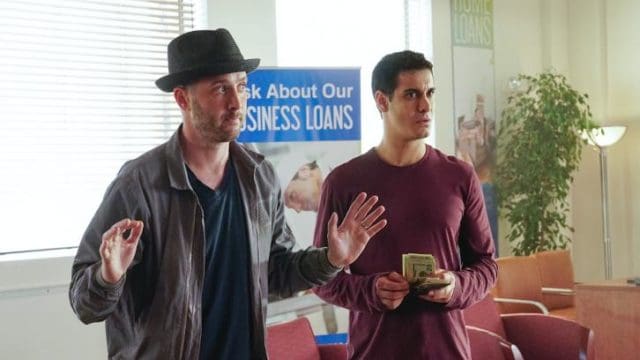 Team Scorpion have accomplished many things in terrible life and death situations. Though when two of their teammates are hostagesÂ in a bank robbery, things get dire real fast. In this week’s episode of Scorpion, Walter and Toby find themselves in the midst of a bank heist. Oh, did I mention Quintis is trying to make a baby via in-vitro fertilization? Yeah, time is of the essence. Literally.

I knew from the moment that Walter and Toby entered the bank that something is off. There weren’t many people inside, and there’re only two tellers at the till. On top of that, the security cameras are all turned off. If that doesn’t make you suspicious, I don’t know what will. Toby attempts to tell Walter that they have inadvertently got themselves into a robbery in progress. The genius brushed the warning off, saying that Toby is just annoyed that they aren’t burning rubber to get to the clinic. Should’ve listened to the doc, Walter.

Meanwhile, Happy is freaking out about becoming a mother for the first time. Which is understandable. I mean, geniuses are just like us regular people when it comes to impending parenthood right? It wasÂ kind of Paige to let Happy look after the woman’s baby while she fills out some forms. Practice makes perfect yes?

Back to the bank situation, I’m glad that the team decided to use comms. If they didn’t, then Agent Gallo wouldn’t know about the robbery and contact the local authorities. Though I have to give the bank robbers some credit. The leader, Stevie, closed all the blinds in the lobby, which interfered with the radio frequency signals from Sylvester and Florence’s attempt to hack into the dye packs lying in a pile on the vault floor. The robbers got caught, of course, when Walter opened all the blinds before getting busted himself by Stevie.

In the end, Toby made it to the clinic on time, and Happy is then presumably impregnated. I wonder if Quintis will take Walter’s advice and have intercourse to increase their odds of conception? In addition, I loved the scene at the very end where Waige is having dinner and Walter cheering Ralph up by offering to fix the roof satellite. You have this father thing down to a science, Walter-boy.

Walter telling Happy over comms that the whole team will help her get pregnant. Yeah, that was awkward. I feel sorry for the bank employees as they will never be able to unhear that.

Toby referring to his sperm as “product.” It’s not like they’re drugs, Dr. Curtis!

Loved the part when Sylvester said “Sly, looking sly” while grooming himself in the mirror. Two thumbs up for that one!

Ralph makes one hell of a wingman. His advice to Sylvester with regards to the human calculator’s attempt at asking Florence out on a date was constructive. Besides, no girl wants to hear “would you like to grab a bite with me” when a guy is asking her out. Good thing Sylvester went after the chemist to remedy his mistake when he asked her to have dinner with him. Fingers crossed for Fly! (That is their official ship name, right?)

I applaud Agent Gallo for treating the quickest route to surround the bank like a maze. That, and for pretending to be a dog walker to help Toby get his sperm sample to the clinic and later a bar owner to distract the getaway driver.

Walter and Toby are taken hostage when they inadvertently stumble upon a bank robbery in progress. Sylvester’s feelings for Florence grow and the former asks the latter out on a date in this week’s episode of Scorpion.