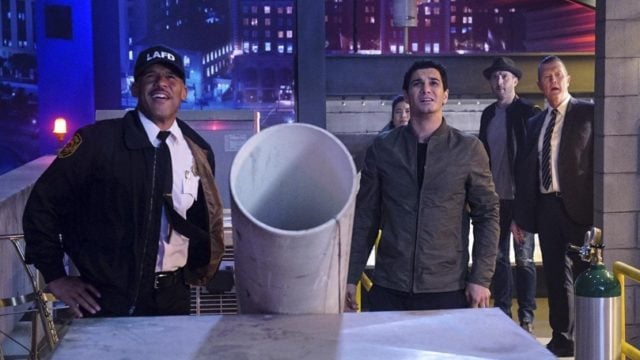 The day of love is upon us once again, but romance will have to wait. In this week’s episode of Scorpion, the team rescues a doctor and a helicopter pilot. The latter crashed into a building due to the Santa Ana winds that are bombarding Southern California. To make matters worse, there’s a patient in the hospital in critical condition, and only Dr. Miller can save. Yep, not good.

This week’s mission, albeit risky, proved to be successful. There were a few nail-biting moments of course given that Walter had to jump from the floor he’s on down to the one below before the chopper explodes. Thankfully Sylvester used the Santa Ana winds to aid Walter in a safe landing on the floor below. The latter only suffered from a broken arm, but at least he is alive.

I applaud Toby’s quick thinking in creating a pressure suit to keep the car accident patient alive until Dr. Miller arrives. It’s one of the ways that I love watching the show. It reminds me of how MacGyver would use everyday items to create something that will get one out of a sticky situation. Maybe there will be a cross-over episode between Scorpion and MacGyver someday?

Back at the garage, Paige is sick with the flu and Sylvester is none too happy when he is told to stay behind. Florence then came to the rescue, sort of, by bringing a custom-made disinfectant solution for the human calculator and cough syrup for Paige. The scene where Florence told Paige that she would never have feelings for Walter calmed my little Waige heart. The chemist next door wants someone who is smart, sweet, vulnerable, and caring. Sounds like a particular mathematical genius we all know and adore. I just hope that if Sylvester enters the dating world again, he will find happiness instead of heartache. He’s been through enough of that with Megan.

Speaking of heartache, I felt sorry for Ralph as Patty asked him to tutor Jesse Colt, a boy she’s planning on attending the Sadie Hawkins dance with. He was looking forward to going to the event with Patty. Though I do not approve of the trigonometry sabotage that the young genius executed. Paige should have caught onto this, but her worry about Walter and the team distracted her from what her son is doing. It would have been fitting to have Paige lecture her son about what he did, but Walter did pretty well.

My heart also went out to Quintis. They were anxiously awaiting their test results, and it made Happy so on edge that she couldn’t concentrate on the mission. Toby then gave in and hacked into the hospital computer, and the results are quite shocking. It turns out that Toby has a condition that makes his boys sit around like politicians, which is why Happy is unable to conceive. I loved the heartwarming moment when everyone chipped in to help Quintis. I don’t cry easily but I teared up a little when I watched the scene. Fingers crossed that Baby Quintis will be happening soon!

Paige found the mixed tape that Walter made for her. Such a sweet moment for the two of them.

Waige about to spend the rest of Valentine’s Day at the garage when a news report came in about a bus filled with people are hanging off of a cliff. Just when you think you’re out, they pull you right back in, but hey, no one does it better than Team Scorpion.

Scorpion returns with new episodes on February 26 after the Olympics. Photo via CBS

On Valentine’s Day, Team Scorpion must rescue a doctor and pilot trapped inside a helicopter that crashed into a building from the Santa Ana winds. Toby and Happy wait for news on their fertility test results and Sylvester realize that he may have a crush on Florence in this week’s episode of Scorpion.