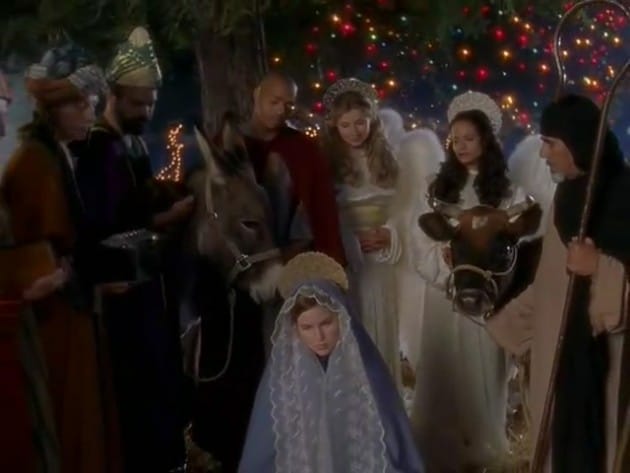 There are plenty of times throughoutÂ Scrubs‘Â run where the show’s eyes were bigger than its stomach; like any series with serious storytelling ambitions,Â ScrubsÂ relies on an important balance between three stories, using thematic devices and metaphors to draw parallels between protagonists, or between characters and audience. When that balance is out of whack onÂ Scrubs, it can create a very disjointed experience, where various stories are overlapping, rather than neatly interloping, bringing the episode’s true themes to life.

“My Own Personal Jesus” is a perfect example of this; isolating Turk, Elliot, and J.D. from each other for most of the episode presentsÂ ScrubsÂ with an opportunity for deeper storytelling, but it’s not one “Personal Jesus” seems all that interested in engaging with. Turk’s sudden allegiance to his faith is never explored outside of its plot implications, nor is Elliot’s challenged sense of identity, which comes about when Kelso stereotypes her as just another female doctor who will eventually work in family medicine. And on top of that, “Personal Jesus” is trying to operate as both a Christmas episode, and a humorous conflict between Cox and J.D. over a baby delivery video totally unrelated to said holiday; to say “Personal Jesus” bites off more than it can chew is an understatement.

What it makes for is a very uneven episode, at least in terms of characters and story; the comedy is really the only thing that feels grounded in any sort of way. Kelso and Elliot’s argument never amounts to anything (even when Elliot attempts to confront him about the issue), and the J.D./Cox story literally goes nowhere, just an excuse to get Christa Miller back to throw down in a leather jacket with some serious burns (“Excuse me Sally Sensitive…”). There’s no denying how fun “Personal Jesus” can be in places; but when it goes for its big emotional beats of the episode, they only make for awkward resolutions, trying to deliver on stories that are either not well established yet (Cox’s lack of actual “friends” outside his ex-wife) or just completely nonsensical – like Turk’s “miracle,” as big a narrative leapÂ ScrubsÂ would take in its first season. And without that conflict of faith really coming to life in the scenes before it – save for the one moment he expresses his frustrations to Carla on the roof – there’s not a lot of room forÂ ScrubsÂ to get the audience to invest on the level it needs to, for viewers to buy into the “faith” they’re trying to explore.

Without that overtly religious tone trying to neatly bow everything together, “Personal Jesus” could’ve operated as a much lighter, more entertaining version of the same episode. Heck, Turk’s crisis of faith can even still be a focal point; if “Personal Jesus” could’ve embraced the chaotic hospital setting it talked about, Turk’s crisis of faith could be explored in a much more tangible way, breathing life into his line about all the “innocent people” needing to be “watched over” on his awful overnight shift at the hospital. Instead, we get aÂ half hour of undercooked stories that exist toÂ shoehorn in an awkward, humorless nativity image, as forced a conclusionÂ as I can remember in aÂ ScrubsÂ episode.

– The Jordan “I’m not buying it” cutaway is one of my all-time favorites.

– Kelso, contemplating his overstuffed hospital: “Why don’t these people have any money?”

– “It’s a beautiful baby boy… Another soldier in the fight against communism!”

– Other great cutaways: Turk’s congregation, The Truth About Childbirth (“You do it!”), Dr. Cox as The Grinch, and the Nurse TisdaleÂ Fast Times at Ridgemont HighÂ homage.

– The Piano Cue appears again, making it three episodes in a row.

– “We shaved the baby! Shave and a haircut… two bits.”