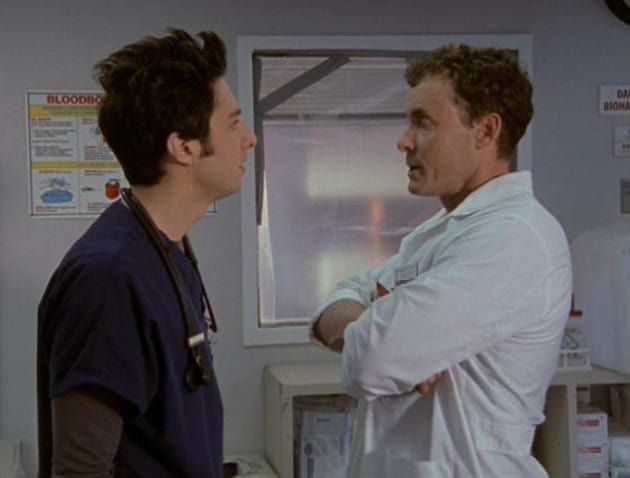 Existing inÂ the aftermath of “My Bed Banter and Beyond,” “My Heavy Meddle” has to ride the fine line between reforming Scrubs‘Â status quo, while still managing to tell stories with some sort of meaningful arc to them. It’s a tough duality to manage, and “My Heavy Meddle” occasionally struggles under the weight of it. However, when it’s time to get down to business, “Heavy Meddle” is more than up to the task on beginning to bridge the rift formed after J.D. and Elliot’s break-up.

There’s a duality to this episode and “Beyond” that really expedites the drawn-out process of breaking up and becoming friends again most comedies go through: just as quickly as J.D. and Elliot came together as a couple, they come back together as friends. More importantly, “Heavy Meddle” doesn’t shy away from the fact their short relationship has changed their friendship, even as it begins to return to the normal rhythms of the past near the end. The conclusion to their story in this episode is important; it’s a surprisingly hopeful story stuck in amongst Carla fighting Kelso over a man in a coma, and Cox going through a depressive episode and unraveling in front of J.D.

Speaking of Cox, I love how “Heavy Meddle” explains how Cox loses his cool once or twice a year, as well as how it manifests out of nowhere for him; we’ve already seen him lose control when he didn’t “pitch a perfect game” a few episodes ago, and watching that frustration return after boiling under the surface for a few episodes only strengthens his connection to the audience. We don’t need to know what happened explicitly to put him over the edge (he only mentions how frustrated he is with everything in the hospital, for Pete’s sake); we’ve seen Cox on the edge before, and this is a natural maturation of Cox’s established self-destructive tendencies.

Coming at a time when J.D.’s in a delicate emotional state changes the tenor of both these stories a bit; it splits the priorities of the episode, leaving Carla and Turk out in the cold while the central three players work out their various emotional issues. Having Cox’s breakdown happen in this particular episode lessens the impact of both Cox’s demeanor and J.D.’s, and not just because it features a weirdly wacky bar scene where J.D. wears pajamas and pretends to hang himself. It asks the audience to invest in two deeply emotional journeys at the same time, which puts a severe strain on any 22-minute episode (we saw in the last episode how well ScrubsÂ did handling multiple stories; it took 28-plus minutes to do it). There’s just not enough space to make J.D.’s hero worship, his own insecurities, and his need to have Elliot back in his life as a friend (mourning the death of a high school teacher close to him) fit into the same episode, and that lack of space has consequences on all three characters it affects (and again, Carla and Turk, who are relegated to background status for all intents and purposes, save for hearing Carla sing).

That being said, this is how the episode is designed, and while it doesn’t work in building out the emotional connections to the stories most top-shelf comedies would, it uses the overwhelming nature of stories to its advantage, pushing J.D. to a vulnerable place. He has to reach out to Elliot to provide some help as he tries to work through everything that quietly happens in this episode, and he also gets to give a little emotional support to Cox, even if it’s not as welcomed as J.D. hopes it would be. It is J.D.’s apartment Cox shows up at, after all – and that’s a big step forward for their relationship, drawing a neat parallel between the two (their inability to handle bad days) even when the ending with him and Elliot overshadows this development by the time “Heavy Meddle” is finished.

Even with split priorities, “My Heavy Meddle” is able to breathe life into two of its threeÂ stories, even in the condensed comedy format it squeezes them into. Carla and Turk might be left in the wind, but “Heavy Meddle” acts as a litmus test for where J.D. is in the two most important relationships of his life and, at that, is a pretty effective half hour of television about being overwhelmed, and how those stressful moments can bring us together in life, even with the person we want to be around the least. In doing that, “Heavy Meddle” accomplishes the difficult task of restarting the season’s status quo, depicting a wonderfully concise romantic arc around J.D. and Elliot in the span of an hour, and why that story just wouldn’t work right now, for either of them.

– Ted is an All-Star in this episode anytime he is around Carla, before and after they sing a wonderful duet of “Talk Dirty to Me.”

– Turk and Elliot work together on a study: there’s a hint of a bigger story when Todd says the surgical interns hire medical nerds to do co-studies with, but it turns out Turk just did it so J.D. and Elliot would have to confront each other.

– High Five Count: None – Todd is denied his only high five attempt.

– Carla doesn’t get impressions: “Who is that, Arsenio?”

– Dr. Kelso’s hatred of heavy metal (“my son is a bit of a headbanger”) provides the title’s word play: he won’t let Carla play Poison for a coma patient, because “half the staff will have genital piercings, and I don’t need them fornicating in vans.”