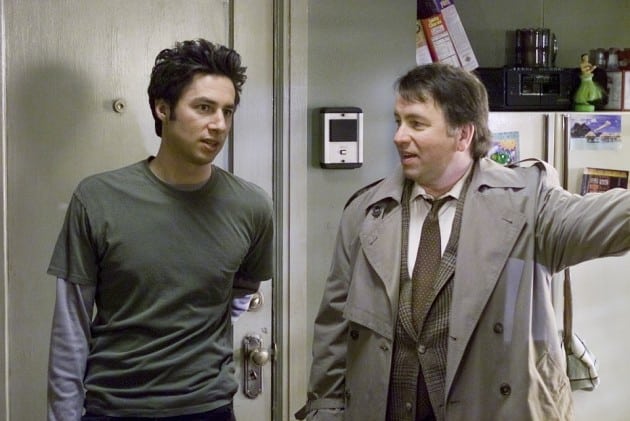 There are a few sitcom elements embedded withinÂ Scrubs‘ single-camera DNA: a penchant for physical humor, the willingness to do anything for a punchline, and the self-perpetuating obligation to tie things up with a neat little bow at the end, bringing every story home with an anecdote and a powerful metaphor. That last trait, which is front and center once again in “My Old Man,” is often a boon for the show. Anything that provides such a sweeping resolution like a Cox speech or J.D. voice-over is an easy ticket to a powerful moment for the series, or in cases like “My Old Man,” feels likeÂ ScrubsÂ bit off more than it can chew, and is trying to fit a bunch of different shapes into a series of circular holes.

Taken in isolation, each of the stories in “My Old Man” have their own values; however, intertwined and tied together by Cox and J.D.’s conversations, “My Old Man” becomes more than a little messy. Elliot trying to live up to unattainable expectations, J.D. being disappointed in his father, Turk and his Freudian relationship with Carla… all of these stories certainly have merit on their own, important little vignettes that help fill in backstory for different characters while simultaneously informing their decisions in the episode. All packed into a 22-minute window, however, it is very hard for any of these stories to evolve their conflicts in meaningful ways, and as a result, “My Old Man” leads to a number of predictable, unsatisfying conclusions.

The blueprint is there in each story, though: Elliot and J.D.’s stories in particular provide strong emotional moments for “My Old Man” to anchor itself with, two resolutions that don’t ring hollow, even if the episode feels like it’s forcing its framing device of “accepting who our parents are, and what they’ve offered us” around their stories (along with Turk’s underwhelming tale of loving the women in his life). Elliot and J.D. both have realizations about their parents, moments where their perception of them shifts from parental units to human beings. In those scenes, Elliot and J.D. both are able to see the deep flaws their parents have (and have probably passed onto them), delineating that moment of maturity when an adult stops seeing his parents as paragons of human existence (giving them no choice but to disappoint), and rather the flawed people struggling with their faults just as we do every single day.

That realization of one’s evolution (and at the same time, coming to terms with what may never change about us, thanks to our DNA) from their parents is important. It’s the “leaving the nest” moment parents talk about, but from the other side, when the younger generation looks back and finds resonance in who they are with who their parents were. It’s important in drawing empathy for people who spent a decade frustrating us as teenagers; it’s often what provides the bridge for reconciliation between father and son (the most important part of any man growing up), and also helps reinforce the bond between mother and child, as well, as the son or daughter realizes how their parents (and mother in particular, if we’re being Freudian) shaped and nurtured them into who they are today.

ScrubsÂ doesn’t have a lot of time to grasp onto that idea; it’s all explained in a J.D. voice-over with a few knowing glances, a victim of an episode with its loyalties split in too many directions. Had the episode integrated Turk, Carla, and Cox further into J.D. and Elliot’s stories, the through lineÂ – as simplistic as it may be – would be a lot stronger, making “My Old Man” less of an episode trying to cover every stockÂ parent/childÂ conflict imaginable, and more like an episode ofÂ ScrubsÂ exploring (and in the process, informing) how every family unit is screwed up in some way, and how those flaws ultimately help define us as human beings. Unfortunately, that’s not the episode “My Old Man” wants to be – and despite a wildly charming John Ritter (RIP) cameo, it never has a chance to approach that kind of ambition or focus.

– For an episode ofÂ ScrubsÂ I generally enjoy, the thematic material of “My Old Man” really doesn’t work for me.

– “So, Rowdy’s a boy dog” is by far my favorite John Ritter moment of this episode. It’s too bad the show never got to explore that relationship further – even more sad that Ritter died before we got to explore his amazing comedic talent further.

– The Janitor’s story with his father is about as tacked-on as can be.

– Turk calls his mother “Mommy,” something that isn’t brought up enough in this episode, or throughout the series.