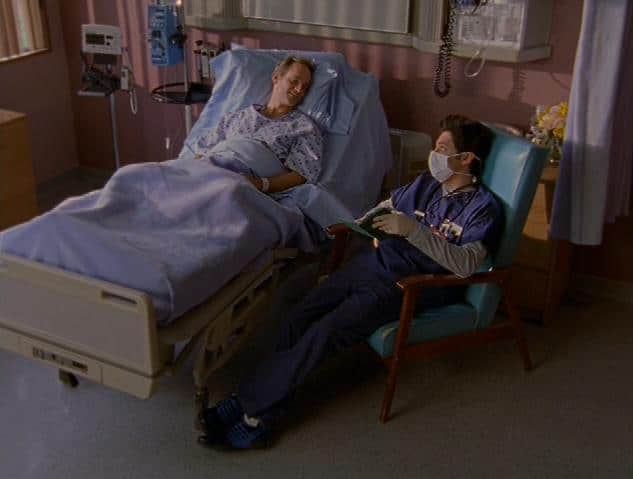 Initially, “My Sacrificial Clam” feels similar to other episodes late inÂ Scrubs‘Â first season run, with distinct, seemingly fragmented stories for each main character. Yet as “Clam” unpacks the stories of J.D., Elliot, and Turk/Carla (and by proxy, Cox), it reveals itself to be something much more aligned with some of the show’s earlier episodes, which used more straightforward narratives to unify the series’ main characters. With the added benefit of having spent more time with these characters, “My Sacrificial Clam” is a ‘best of both worlds’ scenario forÂ Scrubs -Â and one that surprisingly, doesn’t come with J.D. at the forefront.

The episode does begin with J.D. getting an needle full of infected blood stuck in his arm; but this episode is as much Elliot’s as it is J.D.’s, though her story comes with a much wider emotional range and dramatic arc. J.D.’s story is but a simple gateway into entering the minds of other characters. For a moment, J.D. becomes afraid of his patients, trading off a meningitis patient when he becomes scared he might contract the disease (in the process, disappointing an under-utilized group of sick doctors including Ed Bagley Jr. and William Daniels). Late in the episode, he turns and sees himself looking back down a hallway, disappointed in his inability to fulfill the simplest (and sometimes, the most dangerous) requirement of being a doctor in not fearing sickness, or death.

That image of J.D. looking back at himself is an important one, a visual that conveys the arc of every other character in one subtle image. “My Sacrificial Clam” is about self-respect, an undeniably complex psychological situation. While it kind of bungles the J.D. story, how “Clam” uses it as an avenue to Elliot’s story is terrific. Her character really comes to life in this episode, building on past installments where we saw her struggle with the expectations of her family and the toll Kelso’s approach to “mentoring” took on her. Her new relationship with Sean has thrown Elliot’s life out of equilibrium. As someone so dedicated to being slightly above-average at her craft, Elliot is career-driven to a fault: as she notes, her life is 98% motivated by not trying to disappoint her father (and 2% by chocolate), which places her on a very specific, constricting path – and if she sacrificed it for some fleeting chance at everlasting love, she would never forgive herself for giving up on her career.

Backgrounding your biggest guest star to date (until the next episode, at least) is a bit of a daring move. Scott Foley’s reduced presence in this episode is essential to its success, however, because it forces Elliot to spend time alone contemplating where her career is headed. After being reamed out by Kelso and skipping a night of studying after hearing Sean say “intercourse,” it’s clear Elliot isn’t heading in the right direction, even if she feels happier than she’s ever felt (to Vijay, who reminds her that they’ve never talked to each other before). The whole notion of “having it all” is often a pipe dream for 20-somethings, increasingly so in today’s world. Elliot’s decision to break up with Sean is the heartbreaking centerpiece of this, an event that ripples throughout the entirety of the episode’s third act.

Sarah Chalke absolutely nails that scene as Elliot – and it’s important she does, because that mixture of hope, disappointment, and determination (with a touch of self-doubt, as even she notes she might come back in a few seconds and regret her decision) is the look behind the curtain into the minds ofÂ allÂ of the characters in this episode. Sean talks about how 90% of human behavior is based on sexual impulses. The number might be a little high, but the idea of pursuit of what we desire holds strong. With Elliot, we can see how chasing something can drive us. For others like Cox, that definition of pursuit becomes something a little sadder and more desperate, hisÂ loneliness pushing him to keep Turk away from his girlfriend as much as possible. For J.D., it’s a bit simpler: he just wants to be a doctor (about as much as Ted wants to get fired), and getting over his momentary fear of infection is the bridge he has to cross to achieve that dream.

Self-respect is a complicated issue to broach. How “Clam” is able to do it with four characters at the same time is a pretty impressive feat, even if some stories feel a bit slighter than others. It all hinges on Elliot’s core arc coming together. Turk and Cox’s dichotmous home lives serve as opposing ends of the spectrum of where Elliot’s decision might take her, and J.D.’s story is more of a thematic entry way than anything truly meaningful for his character. Elliot has to put on a smile and make a choice, and she does so in affecting fashion. Because of how well that works, it brings added life to other stories, like Turk accepting that he’s not in perfect shape because he’s happy (though Carla’s passive-aggressive attitude about his weight is weird), and Cox slowly coming to terms with his own depression, and how he’s re-shifted his priorities in life to an unhealthy extreme. In the long run, “Clam” may not prove to be one of the most influential, memorableÂ episodes of ScrubsÂ but there’s a chemistry to it that’s hard to ignore, providing an important blueprintÂ for many of the show’s best episodes to followÂ later in its run.

– Elliot’s awkward attitude about sex and sexual conversations leads to many hilarious Frozen Elliot Faces in this episode.

– High Five Count: One half-hearted commitment five from Turk, and a denied high-five from Cox (for his name, which the Todd just picked up on).

– “I’m prettier… in the park” is one of the lamer things you’ll hear Carla say. In fact, how she chides Turk about his weight then gets mad when he gets paranoid about it is probably the most lame Carla plot of the entire season.

– Ted might be a someone you don’t want to mess with: “One phone call.”