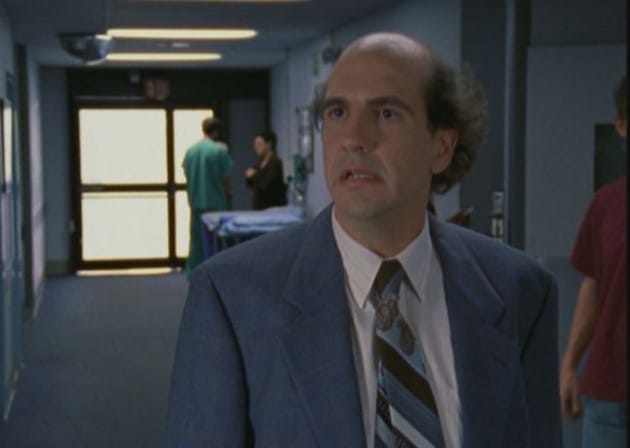 ScrubsÂ takes its slapstick to a new level in “My Fifteen Minutes” – but amidst all the cutaway visual gags and punchlines is one of the show’s most ambitious efforts yet, an episode that tries to weave three complicated, somewhat unrelated stories together into one satisfying 22-minute endeavor. Does it work? Given the varied mileage we have with each of our main characters so far, it’s kind of impossible for it to work, especially considering the increased attention given to Ted and Janitor in the episode – and yet somehow, “My Fifteen Minutes” is able to channel all that energy and deliver a half hour full of memorable jokes and important character development, even if it’s an episode more remembered for iconic jokes than its individual resolutions.

There’s a reason for that, of course: the cutaway gags of the episode are some of the best in the series, beginning with J.D.’s “holy inferiority complex, Batman!” at the beginning, right through Ted realizing heÂ isÂ the man for once. And all these visual gags exist for a reason, especially for J.D.’s character; his first daydream of the episode, which occurs after him and Turk save a fallen cameraman outside a strip club, sees him putting himself in the shoes of the sidekick, rather than the hero. This immediately suggests to the audience what the underlying conflict of the episode really is for J.D., who continues to define his success and failures by other people’s perception of him.

That attention to others has robbed J.D. of something important: a sense of identity in the hospital, understanding his strengths and weaknesses, and how they affect his ability to be a proficient doctor. He’s got the talent, sure, but as Dr. Cox points out (and as Turk learns about himself when Kelso begins to post semi-racist signs promoting diversity at the hospital), being singled out – or attempting to be singled out for approval – really means nothing; it just means someone was in the right place at the right time, and explicitly recognized you for something. If you’re not happy (or honest) with yourself as a human being, can you even enjoy those moments? Do they really have any meaning?

These questions fuel both Turk and J.D.’s stories, which intersect in awkward ways and never explicitly draw parallels to each other. That intellectual disconnect is important; J.D. lacks the confidence Turk has, be it with women or performing his services as surgeon. That’s why he’s not afraid to express himself honestly around Kelso – and it’s also why J.D. can’t do the same around Cox, trying to goad him into giving a rushed evaluation, just so he could be reminded that yes, he’s talented, and yes, he may one day actually be a great doctor. Of course, his immaturity always defines him, and causesÂ him to writing a white-washed version of his performance, leading toÂ the subsequent dressing down by Dr. Cox in the dimly-lit back room of Sacred Heart.

Honesty also plays a part in Carla and Elliot’s story in “My Fifteen Minutes,” but in a much less satisfying way. Carla’s insulting behavior is never really given the definition it needs, so when the script openly sides with Elliot’s feelings of rejection, it kind of leaves Carla in the wind. This isn’t the first or last timeÂ ScrubsÂ would do this with her, but in an episode that’s trying to bridge the personality gap between the two, it lays the cruelty on a little thick: in fact, Carla’s presence is really the avenue forÂ Turk‘s evolution in the episode, which makes for a very weird final act when Turk takes care of her sister’s injured son and gets to feel like a role model for the first time. There’s a certain disconnect when the episode hits its third act; the focus shifts to the males, leaving Carla and Elliott’s story as another early example of their passive-aggressive pursuit of friendship with each other that feels out of place among the more personal individual stories of the first eight half hours.

As I mentioned, “Fifteen Minutes”Â isÂ an important episode, despite its shortcomings; its ambitious storylines act as litmus tests for its characters and their personal journeys, and help engage viewers with important internal conflicts future episodes and seasons would further compound (like Ted’s miserable nature, my personal favorite). However, “My Fifteen Minutes” overstuffs itself by trying to injectÂ everyÂ main character’s story into the narrative, emotional expeditions that don’t naturally line up thematically; both to its benefit and detriment, “My Fifteen Minutes” doesn’t try too hard to find a common through line, leading to an entertaining, if jumbled, episode.

– Ted had hair when he started working at the hospital, “… and a wife, and a family.”

– “Whose breasts haven’t I signed yet?” *cut back to real life* “ItÂ couldÂ happen.”

-Â High Five Count: one high five – and none involving Todd! Turk gives Ted a celebratory fiver after he tells off Kelso… but not until Ted ducks away in fear first.

– The four signs: “Wellness Through Diversity”; “Wazzup? Your white blood cell count at Sacred Heart”; “Our MD’s Have Mad Skills”; and “Time To Get An EKG, G.”

– Elliott: “Maybe I’ll have a cigarette, just get crazy and see where the night takes me.” Cut to her getting her hat robbed the second she steps out of a cab.

– The emotional piano cue makes its debut, long before it became a constant device of self-parody.