Sarah Clarke’s Elliot is returning to Scrubs on January 1st (Scrubs returns to Tuesdays as of January 5th). ABC has released several promo photos for the episode. You can also check out sneak peeks for the episode. 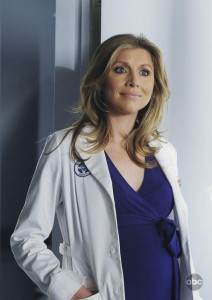 ELLIOT OFFERS SOME GUIDANCE TO AN OVER-WORKED AND EXHAUSTED LUCY, ON ABC’S “SCRUBS”

“Our New Girl-Bro” — While Turk struggles to find a replacement best friend, Elliott offers some sound advice and guidance to an over-worked and exhausted Lucy, on “Scrubs,” FRIDAY, JANUARY 1 (9:00-9:30 p.m., ET), on the ABC Television Network.