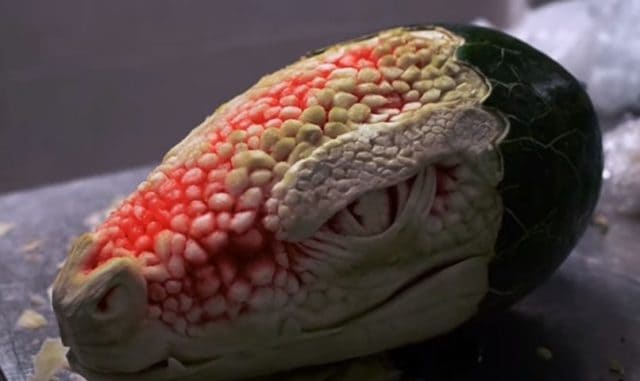 This sculptor obviously had a lot of time on their hands to get this much detail into this dragon’s head. All I can say is, WOW. That’s a mark of being impressed quite honestly as watching this clip in its sped up form attests to just how long it must have taken to get these painstaking details added in. I do kind of wonder why the artist didn’t bother using the whole melon but there are a couple of reasons I can think of.

One would be to add a little more stability to the project so that it doesn’t run the risk of falling apart. Another is that it just looks so much cooler, and gives a better impression of what the thing really was to start with. The details are so intense that just by looking at it you can almost imagine that the creature is about to open its muzzle and breathe fire on you judging by the reddened scales atop its snout.

The eyes are amazing, and the sculptor even took the time to add the network of veins running through the white of the eye as well. That had to be a painstakingly long process, but it came out so perfectly that it just adds to the whole project.

Atop its muzzle it almost looks like the artist dug a little too deeply, as though trying to get the red to pop just a little too much, but when you look at it again it might seem like this was intentional to get a rougher, more rugged look for the creature. It’s just flat out impressive and can’t be said enough.

It can be argued that a little more detail or coloring at the bottom could have livened it up just a bit and given it another dimension or level of realism, but carving it would have been out. At the point of completion there could be only so much more carving that could be done without seriously compromising the stability of the piece. If nothing else the project needs a sturdy base to rest on so that it won’t fall apart completely. That’s a guess anyway, just from experience.

The inclusion of the red from the melon is simply fantastic. It gives the look of fire but with a definite balance of color that isn’t too much but is just right. I kind of wonder if this thing were painted if it would take on a different appearance at all or if it would simply begin to pop out just a little more. It would take a lot more work to get the colors right and the red would be best left alone just because it makes the whole thing work a little better.

That’s all the nitpicking I’ll do because honestly I am very much impressed with this sculpture and don’t feel the need to tear it apart. The artist of this piece should be extremely proud because their skill is on a level that a lot of people can’t match.