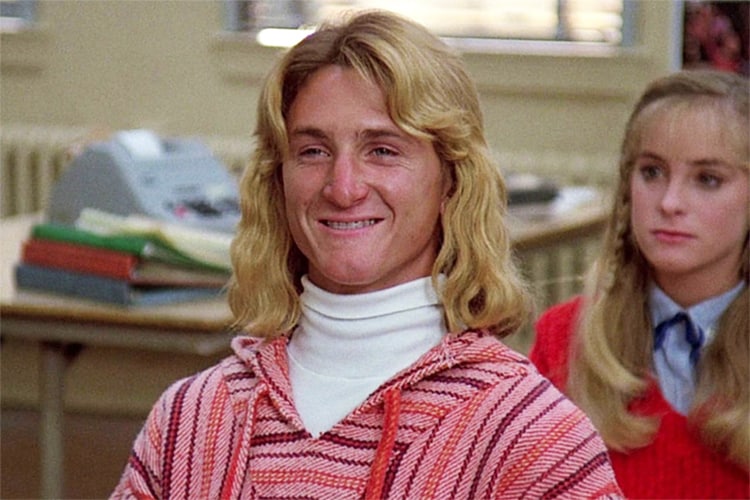 There are definitely a few very recognizable stoners throughout the history of cinema, but Jeff Spicoli is one of those that usually comes to mind for a lot of people when one thinks of the most memorable. His legendary role in Fast Times at Ridgemont High was almost not to be since Sean Penn admitted that he was self conscious about the audition process and didn’t feel as though he needed to go through it along with everyone else. Of course that might have lost him the role if someone hadn’t seen something in him that they didn’t want to let get away, and as Sean was headed out to his broken down car he was called back and told to audition as best he could, and the rest is history. To think that he almost lost out on this role however is kind of amusing since it means that he did happen to think that he was a little too entitled to have to try like the rest of the cast, who he apparently thought weren’t good enough for their roles. But all that being in the past, it’s easy to think that Penn had some growing up to do and he managed to accomplish that on set and as time went on. Thinking back to this character it’s actually kind of difficult to associate Penn with Spicoli any longer since he hasn’t played the part of a stoner for a long, long time at this point.

When you really look at it he’s one of the few real success stories that came out of the movie since he’s one of the few that’s still fairly popular throughout the years. He’s managed to land roles that have earned him a great deal of notice and acclaim at times and are memorable enough to be right up there with Spicoli. Sean Penn is the type of actor that’s easy to like or dislike depending on the role he’s playing, though to be fair he’s also the kind of guy that can take a role a little too far sometimes. It does sound as though he stayed in character the entire time he was on the set, as he would only answer to the name of Spicoli. Some folks might think that’s a bit of a stretch, but really it’s not the strangest thing to happen on any set, though it has to be kind of stressful for those that have to learn how to deal with the actors and their quirks. Apart from that however there were plenty of other things in the movie that really felt kind of odd since they made for a lot of memories, but not all of them were necessarily good.

As of now Penn is a legend and can laugh about his earlier roles with a lot of good memories and a good amount of humility. But back in the day it does sound as though he had a bit of a chip on his shoulder when it came to acting and thought he was a little better than what he actually was. As he started to grow up his roles took on a different cast as he still had a good deal of arrogance in his act and even a good amount of defiance, but he started becoming someone that people really enjoyed as well, as the movies such as State of Grace and I Am Sam were milestones it feels in his growth as a performer, a sign of the times stating that he’d moved forward in a big way and wasn’t the same person off screen any longer. The evolution from Spicoli to who he is now was kind of a process and it was interesting to watch to be certain, though it’s been an upward movement that has taken place over many years and has been for the better since to be reasonable, Spicoli was a great role since he was funny and ultimately a great example in how to chill and just be a fun-loving stoner that didn’t take much seriously. In fact it does feel accurate to say that Spicoli might have inspired a lot of people moving forward in the movies since the era of the stoner in movies has come and gone, though it’s not nearly the same as it used to be back in the day.

Penn definitely looks back with a good deal of humor on the role and no doubt acknowledges that it was one of his luckier moments since he was actually brought back to audition when he was ready to quit. It’s not just everyone that would be asked to return after walking out after all, since a lot of actors have copped this kind of attitude in the past and found that they’re not as valued as they believed.