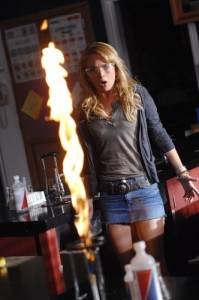 The Secret Circle dropped a lot of mythology on us last night, while shaking up the status quo that was established in last week’s pilot. Just when you think you are beginning to get a feel for where these characters are headed, the writers smack us with exposition that proves otherwise.

The power amongst the Circle ran amok last night with only Faye being the sole person not freaked out by the intensity of their recently heightened abilities. Nick kind of didn’t care either, but it’s quickly becoming apparent that Nick pretty much doesn’t care about anything except getting high and bedding his female Circle members. The only way for the Circle to bridle their powers, according to Diana, was for the group to bound their circle. However, according to Faye, taking that action would diminish each person’s individual power by linking the six to make the Circle stronger in their capabilities.

Of course, it took someone to get hurt for Faye to come to her senses, and for Cassie to drop the “I wanna be normal!” act and get with the program. The group agreed to finally bind the Circle, but Diana later confessed to Adam that she really doesn’t have a clue of what she’s doing. In other words, binding the Circle could bring more harm than good, setting the group up for a world of hurt. What evil could possibly come from binding the Circle? Could the results be all the proof that Faye needs to take over as leader of the Circle from Diana? Could this also further drive Adam away from Diana into Cassie’s arms?

Previously in The Secret Circles Past…

The parental units were in full force last night and we got a nice big chunk of what happened in the previous Circle without actually knowing what exactly happened.

So we know that the previous Circle was involved with a fire on a boat that took the lives of several of its members. Cassie’s father, Adam’s mother, Melissa’s father, Faye’s father, and both of Nick’s parents all perished in the fire, which forced Henry Chamberlain to strip the then surviving members (Dawn, Ethan, Amelia, and Charles) of their powers. As we know, somehow Charles and Dawn regained their powers, which makes you wonder if the strength of the current Circle will be Charles and Dawn’s ticket to fully regaining their own powers? Also, was the white crystal the two used tonight a source of their power, or a temporary talisman to use until they restore their powers? Plus, who are the Elders? Another order of past Circle members? A lot to mull on here…

As soon as Grandfather Henry walked onto the scene, I knew he was there to keep an eye on things… and end up as dead meat by the end of the episode. Although that’s not to say the man’s time on the show was completely wasted by any means. Grandfather Henry’s character pretty much filled in some blanks to help stabilize the mythology more pertaining to the past as well as The Secret Circle‘s lore concerning witchcraft within its universe. He also brought out the true mastermind, or an equal villain, in that of Dawn Chamberlain, who is deft at lying to your face without even the slightest twitch of a facial muscle. With Charles Meade’s relentless nature and Dawn’s cunning perception on things, it’s going to be fun seeing these two raising hell on the town of Chance Harbor,

One thing that I really enjoyed about last night’s episode was the building of Melissa and Nick’s characters. In the pilot, Melissa didn’t say too much to make her standout, while Nick mostly brooded in a corner whenever he was in a scene. This episode opened up by giving them more to work with, especially Melissa’s obvious infatuation with Nick that has become more complicated now that the two have slept together. We also saw that Melissa seemingly doesn’t have a backbone as of yet, letting herself be dragged around as a sidekick (or lackey) by Faye. Nick, like I stated above, is your average teenage bad boy, but how many of you want to bet that he’s the teenage bad boy with a heart of gold? Will Nick try to approach Cassie on a dating level or will he see that someone already has eyes for him?

The fated connection between Adam and Cassie grew stronger as well last night with the chemistry between them became more and more difficult to control. They are undoubtably powerful together, which anyone with a conscious can see. Most notably Diana. The fact that Diana knows this fact and is perturbed about it is an interesting angle for the writers to play with. I wonder how long will it be before the you-know-what hits the fan when Cassie and Adam finally connect in a physical manner. Again, I hope it is midseason, but at the rate the storylines are spinning now? I’m thinking we will have a Cassie/Diana showdown of sorts by Christmas.

We got to see wild Faye, but will it be the end of her before she ever got a chance to really show out? After being a very intimidating force to Cassie, Faye was shaken out of her power stupor after slinging poor Sally Matthews across the dance floor and off a balcony. Seeing that her powers are indeed dangerous, she finally agreed to binding the Circle, but I heavily doubt that the bad girl within will remain bottled up for long.

So what did you guys think about the second outing of The Secret Circle?