Canada has given us Americans maple syrup, thicker cut bacon, and Celine Dion but, after last nights episode of Shameless, Canada is giving us someone they never want us to thank them for. Frank Gallagher was returned to America after a drunken bender left him in Canada. And with the way Frank acts, we the viewers were in for a good time with Frank and the rest of the family… or at least for the most part we were.

This weeks episode really only revolved around Frank in my mind. Frank begins the episode by being head butted by Eddie Jackson. We know that this comes from the fact that Eddie’s daughter Mandy, had been giving sexual favors to Lip and Ian in trade for tutoring. Well this sends Frank into a angery spiral. He goes home and returns the headbutt he recieved right to Ian, heads out for more beer, and then ends up in Canada (although Canada’s presence is brought on by Steve). While all this went on, I really felt sympathy for Frank as a human. In the pilot, I saw him as a drunk degenerite who had no care for his family. However, this week I saw that Frank just wants to be more than a drunkard. This revelation, or I should says growth of Frank came towards the very end of the episode.

Frank and Shiela’s sexual tryst came as no suprise if you know any about the series, but to those who haven’t read any spoilers/watched the original british show, seeing these two hook up was a match 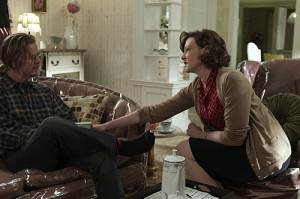 made in hell. These two characters are so opposite that we can only expect to see multiple relationship train wrecks in the future. The two did share a great sincere moment this week. After the horrifying reveal of how Shiela really like to “do it”, we are shown a peacful dinner between Frank, Shiela, and a visibly creeped out Mandy. Seeing how Mandy now knows this information of her mother dating Frank, it’s only a matter of time before the Gallagher family, and more importantly Eddie finds out about the whole thing.

With that being said, I really found no reason to care about the other Gallaghers except for Debbie. The others of the family looked for Frank as though he were a puppy, only showing emotion when they thought he had dies. Debbie on the other hand showed a side of a Gallagher I didn’t know was possible. The moment she realized her dad Frank was gone, she began scarred and worried. I have to give kudos to Emma Kenney for displaying such emotion through a fictionaly character, that I even started to feel bad for her. Now, if only the rest of the clan can grow that kind of heart.

Now granted every episode can’t be as good as the pilot, Shameless stuck it out in this average episode. The show is still growing so I feel that the characters will be given more moments of true emotion or growth soon enough. B+