Shameless is back for another week with a doozy of an episode. This week had so much going on that I felt it hard to keep up in some areas. With mobsters, xenophobes, aliases, and a messed up child, Shameless attempts to cram multiple stories into a one hour block of programing. The question is, do the stories glue the episode together or are they just thrown in as an attempt to keep viewers attention?

I am not sure I would label any one story as the main arc for the episode. Rather, each mini story, minus the Ian/Kash story, came together to form a storyline that is coherent and fluid. I have never seen so much action in a single hour before watching Shameless this week but, I felt that the way everything was laid out in little chunks made it much easier to understand what was going on. During the course of the episode, I never once felt like something was out of place or that a story line shouldn’t be there. I have to give high praise to the writers for keeping everything interesting through the jumbled mess of the Gallagher’s this week.

I feel like I should at least touch on two of what I call bigger pieces of this week’s puzzle-esque episode. The first is that of Carl and his school troubles. We have seen throughout the past view episodes little glimpses of Carl and his odd behavior. This week finally gave us a closer look into the life of 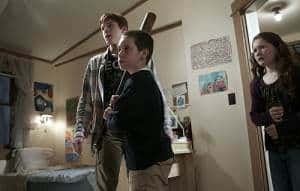 Carl and we see that he has plenty of trouble in his life. I enjoy seeing how Carl really shows no remorse of the actions he commits as I think he has no other ways to express the way he feels in his life. Be it having no father or having to grow up a little too quick, no one for sure can explain why Carl is acting this way and it seems like we won’t know for a while. Luckily though for the rest of the family, and Lip, Carl’s delinquent behavior saved the day and more than likely ended the walking life for one unhappy customer of Lip.

The other story that took up a lot of time was that of Frank and what appear to be two mobsters. I have a feeling that this story will be hashed out for a few more episodes as we never got a true conclusion to the story. It seemed very odd that Frank wouldn’t just stand up to the guys as he usually likes to speak his mind to whoever he is around. These guys seem to really need the money from Frank as they are relentless in getting their money. So far as to go to a school just to prove to Frank that he isn’t safe. While not much was shown for this story, I have to say it was really amusing seeing Frank run out the bar from the men. Still carrying his beer Frank was able to run for a few feet before chucking his frosty beverage. The fact that Frank was then able to escape the men, on a skateboard no less amazes me. I guess I under estimated the abilities of Frank.

Shameless is just starting to get its legs and I feel that this episode was the push needed to make Shameless a must watch show. The episode was fresh and very original in my eyes. Let’s hope that we can see more episodes like this. A+